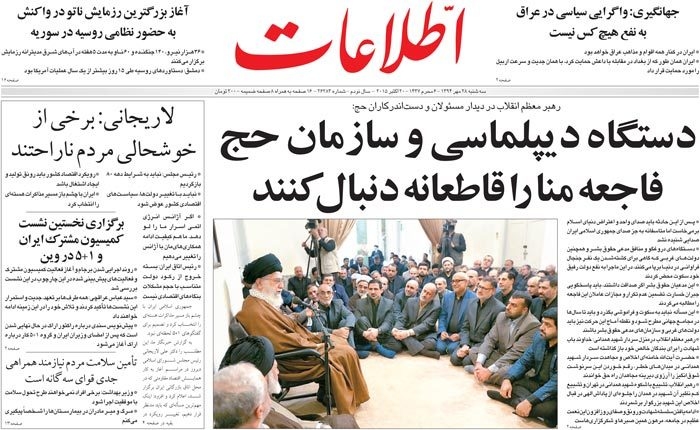 A special look at the headlines Ettela’at newspaper covered on October 20.

♦ NATO has launched its biggest military exercise in reaction to Russia’s military presence in Syria.

Meanwhile, Syria said that the military achievements of Russia in two weeks [of airstrikes against terrorist targets] dwarfed those of America’s year-long campaign.

♦ “Some individuals are sad to see people happy,” said the parliament speaker.

Ali Larijani further said we should not return to the past decade [a reference to the time when Ahmadinejad was president].

♦ The Iran-P5+1 joint commission has had its first meeting in Vienna.

The meeting on Monday focused on how the Joint Comprehensive Plan of Action should be implemented and what measures the joint commission should take to facilitate its implementation.

♦ The health minister has said guaranteeing the healthcare of the public requires the serious contribution of all three branches of government.

Dr. Hassan Hashemi further said some individuals do not want the Healthcare Transformation Plan to be successfully implemented.