Highlights of Ettela’at newspaper on July 21 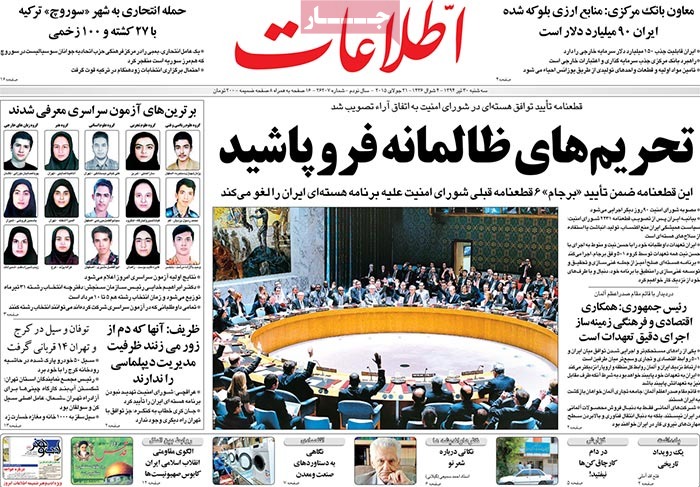 A special look at the headlines Ettela’at newspaper covered on July 21.

“Iran will keep its end of the bargain if the other side fulfills its commitments,” the president further said.

♦ “Iran’s frozen foreign currencies overseas stand at around $90 billion,” said a deputy governor of the Central Bank of Iran.

Iran can absorb as much as $150 billion in foreign investment.

♦ A suicide attack on the Turkish town of Suruc left 27 dead and 100 others injured.

In another development, snap elections in Turkey became more likely.

♦ The top finishers of the nationwide university entrance exam have been named.

♦ “Those who talk about use of force do not have any diplomatic management capability,” said Foreign Minister Mohammad Javad Zarif.

His deputy Abbas Araghchi said the UN Security Council has confirmed that Iran’s nuclear program does not constitute a threat.

♦ Severe storm and flooding in Tehran and Karaj have left 14 people dead.

Floodwaters washed away 50 cars parked along the Karaj River.

Iran, Germany have differences over some Mideast issues: Afkham