Highlights of Ettela’at newspaper on July 15 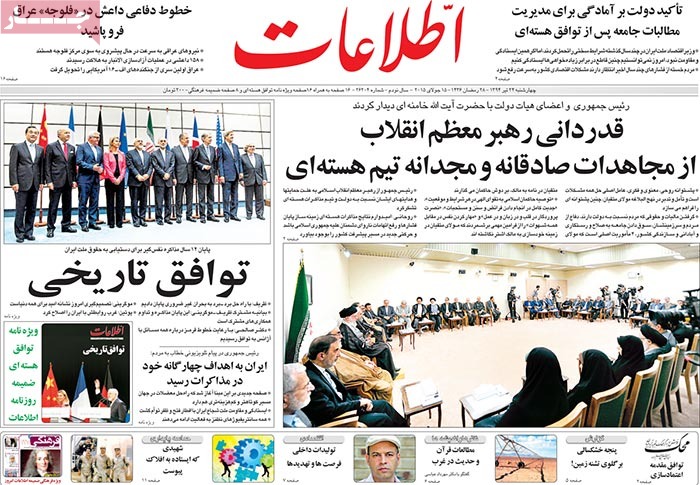 A special look at the headlines Ettela’at newspaper covered on July 15.

♦ In a meeting with the president and his Cabinet, the Supreme Leader appreciated the sincere, tireless efforts of the Iranian nuclear negotiating team.

In the same meeting President Rouhani expressed hope the nuclear deal will end unjust pressures on the Islamic Republic of Iran and facilitate the country’s march on progress.

♦ Government has signaled its readiness to meet public expectations following a nuclear deal with P5+1.

The minister of economy said over the years the Iranian people went through a lot. “Had it not been for their perseverance, we would not have been able to defy the excessive demands of the other side.”

♦ A historic deal marked the end of 12 years of intensive talks to cling to Iranian rights.

Foreign Minister Zarif said he and his team built on the assumption of securing a win-win solution to defuse an unnecessary crisis.

♦ “Iran secured all four objectives it pursued in nuclear talks [with P5+1],” President Rouhani said in a televised speech after the conclusion of a deal with six world powers.

The president also said all centrifuges in Natanz will remain operational.

♦ IS defense lines in Fallujah have crumbled.

Iraqi forces are moving in on central Fallujah; so far 158 IS terrorists have been killed in a massive operation to liberate Al-Anbar Province.