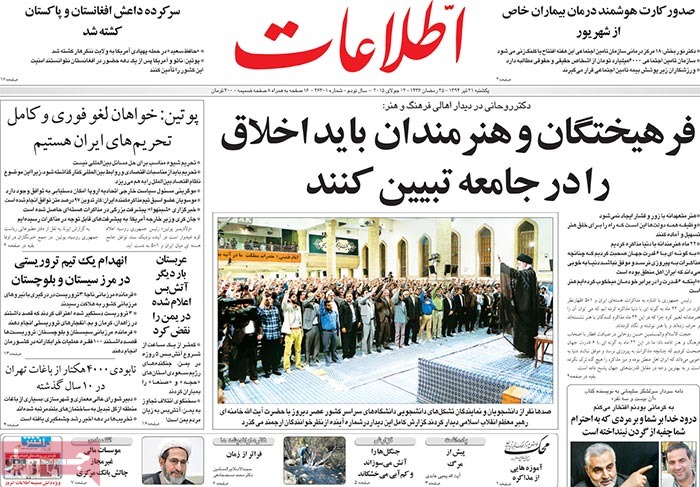 A special look at the headlines Ettela’at newspaper covered on July 12.

♦ The Supreme Leader has met with hundreds of university students.

♦ Individuals suffering from special diseases will be provided with smart cards in September.

♦ The leader of the IS terrorist grouping in the Afghanistan and Pakistan region has been killed.

Hafiz Saeed died in a US drone strike on the Afghan province of Nangarhar.

He said that sanctions should be eliminated from international relations, because they are disrupting global trade.

♦ Saudi Arabia has once again violated the cease-fire in Yemen.

A spokesman for the Saudi-led coalition has said that the cease-fire does not serve the interests of the Yemeni people!

♦ A terrorist gang has been busted in Sistan and Baluchestan Province.

A commander of the Iranian border guards has said that three terrorists were killed in clashes with his men.

Three others were arrested and later admitted that they sought to set off bombs in Zahedan, Kerman and Bam, the commander further said.

♦ Some 4,000 hectares of Tehran orchards has been destroyed in the past decade.

♦ The commander of IRGC’s Quds Force has written a letter of appreciation to Ahmad Yousefzadeh, the author of Those 23 People.

In the book, Yousefzadeh has depicted the gallantry in captivity of 23 comrades of Major General Ghasem Soleimani.