Foreigners can never impose will on Syria: President Rouhani 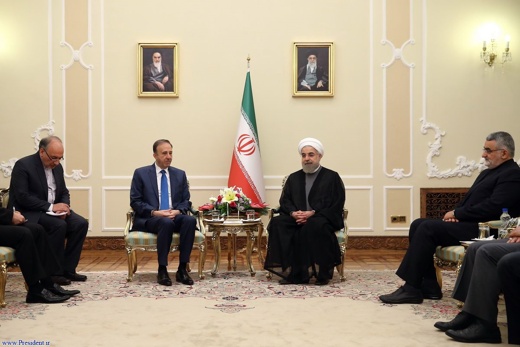 President Rouhani says that terrorists can never succeed in their plots against Syria.

Iran’s President Hassan Rouhani said foreign countries will never be able to impose their will on the Syrian nation.

He made the remark in a meeting with the Syrian Parliament Speaker Mohammad Jihad al-Laham.

Expressing optimism about the ultimate victory of the Syrian nation and army in the fight against terrorists, he said that now after four years of resistance and struggle the enemies of Syria have come to realize that their dreams of gaining dominance over Damascus in just a few months were hollow ones.

Stressing that terrorists could never succeed in their plots against Syria, President Rouhani regretted that some regional countries were badly mistaken when they thought they could always use terrorists as a tool to secure their purposes.

However, the president added, they were not aware that these groups would eventually become a nightmare for them.

He further underlined that the Iranian people and government will stand by the Syrian nation to the end of the crisis.

The Syrian official said his nation and government would never forget the support of their Iranian brothers and friends.

He slammed the inefficiency of the United Nations in addressing world problems and criticized it for inability to implement the proposed plan by the Iranian President for creating a world free of violence and extremism.

He also expressed regret that some regional countries were supporting terrorist groups in Syria and said these countries were in fact implementing the plots hatched by the US and the West to serve the interests of the Zionist regime.

Al-Laham arrived in Tehran on Monday heading a parliamentary delegation. He has also met with Parliament (Majlis) Speaker Ali Larijani.