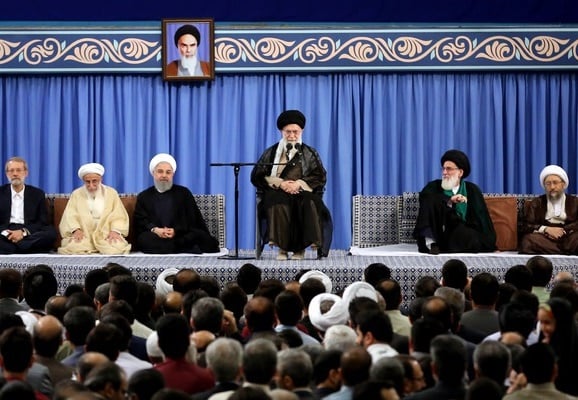 The Leader of Iran’s Islamic Revolution Ayatollah Seyyed Ali Khamenei says the enemies’ major conspiracy is to put Iranian people under economic pressure to frustrate them.

Addressing a huge crowd of worshippers in sermons following Eid-ul-Fitr prayers on Friday, Ayatollah Khamenei said the enemies’ policy is to stage propaganda campaigns to trigger a war of nerves in the society.

He criticized some media outlets and individuals that repeat enemies’ words, and asked them to stop it.

Ayatollah Khamenei said the reason behind “diabolical powers’” constant plots against the Iranian nation is that they are concerned over the nation’s resistance, power, independence and lofty and creative thoughts.

“These powers make every effort, but they always fail,” said Ayatollah Khamenei.

He then referred to US President Donald Trump’s admission that Washington spent $7 trillion in West Asia in vain, which indicates “they have failed in the region.”

“This admission shows the Great Satan (the United States) has failed to achieve its objectives despite making so many attempts, and it will keep failing to attain its goals, no matter how much more money it spends in this region,” the Leader noted.

He urged Iranian people to remain vigilant and get to spot conspiracies.

He called on people to abstain from profligate spending and extravagance while urging officials to take the necessary measures to address people’s economic problems.