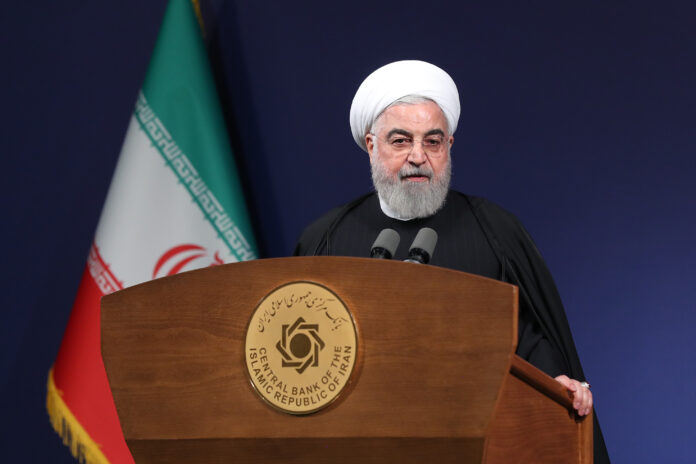 Iranian President Hassan Rouhani has highlighted the importance of taking daily care for maintaining security, saying the distance between war and peace is only one bullet.

Speaking on Thursday at the 59th Session of the General Assembly of the Central Bank of Iran (CBI), Hassan Rouhani said, “As the Chief of the Supreme National Security Council, I take care of security and preventing military encounters on a daily basis. If no daily care is given, the distance between war and peace is only one bullet.”

Referring to the hard days and the many tragedies and hardships over the past two weeks, the President emphasised, “The people have alleviated their sorrows and troubles by their presence and sympathy, and it is the cultural and national characteristics of the Iranian nation.”

Rouhani continued, “The enemies created a situation, overcoming which was not –and will not be- possible without the resistance and steadfastness of an integrated nation.”

The president referred to the consequences of assassination of an Iranian military commander by the Americans in the region and the world, saying, “This martyrdom even affected the prices of the currency, oil, and stock markets inside out outside of the country, and influenced the whole region psychologically, intellectually and politically”.

“The United States is oppressing and carrying out acts of aggression against all countries around the world, and some may respond with words, but the Islamic Republic of Iran shook their base for one night and kept the Pentagon awake for 24 hours,” he said.

Rouhani said that it was very important that we forced the United States to retreat from their threats, adding, “The US president had said that if Iran responded to the assassination of Gen. Soleimani, 52 important points, including Iran’s cultural and historical centres, would be targeted, but when the Islamic Republic of Iran attacks this military base, his tone and plan change and he officially pulls back.”