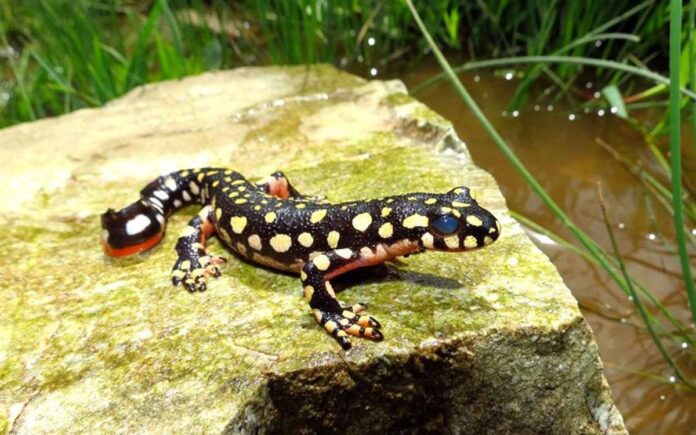 A number of Azerbaijan newts or Lake Urmia newts, a beautiful and rare type of salamander, have been observed and registered for the first time in Iran.

The discovery was announced by Majid Kharrazian, the director general of the Iranian Department of Environment’s Office for Wildlife and Marine Life of Domestic Waters.

“An expert from the office’s Reptiles and Amphibians Group in cooperation with experts of the Department of the Environment of West Azarbaijan province and personnel of the Environment Office of the town of Oshnavieh managed to record the presence of 12 Azerbaijan newts in Oshnavieh border area.”

The Azerbaijan newt is a rare species, the Persian-language Islamic Republic News Agency (IRNA) quoted the official as saying.

“The Azerbaijan newt’s population distribution is recorded only in Iran’s West Azarbaijan province,” he said, adding the recent observation was the first time the species was seen in Iran in living memory.

The Azerbaijan newt (Neurergus crocatus), also known as the yellow-spotted newt and the Lake Urmia newt, is a species of salamander in the Salamandridae family found in Iran, Iraq, and Turkey.

Its natural habitats are temperate forests and rivers. It is threatened by habitat loss.

The animal is registered on the International Union for Conservation of Nature (IUCN)’s list of vulnerable species.