IFP has taken a look at the front pages of Iranian newspapers on Wednesday, September 5, 2018, and picked headlines from 12 of them. IFP has simply translated the headlines and does not vouch for their accuracy.

The top story in all papers today was the fresh round of hikes in forex and gold coin rates, and the historic devaluation of the Iranian currency.

Several papers also covered the Syrian and Russian airstrikes against terrorists’ positions in Syria’s Idlib, the last militant-held stronghold, which is to be retaken in an upcoming offensive by the Syrian army.

2- Reformist Politician Hashemitaba: Parliament Itself Must Be Impeached by another Body 1- Ayatollah Jannati: Prosecute Those Involved in Massive Corruption, Not Minor Ones

2- Economic Analyst: Even a Piece of Wood Could Do Better than Rouhani

3- Cars of Those Removing Their Hijab to Be Confiscated 2- Which Hidden Hands Are Increasing Prices amid Forex Rate Hikes? 2- We Reached Deal with European Governments, but Their Economies Are Run by Private Firms

1- Kerry to Run for President in 2020 US Elections 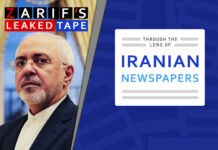