A look at Iranian newspaper front pages on May 7

Comments by Islamic Revolution Leader Ayatollah Seyyed Ali Khamenei in a meeting with Iranian teachers that nuclear talks overshadowed by threats are not acceptable dominated the front pages of Iranian newspapers on Thursday. Also in the news were the opening of the 20th International Oil, Gas, Refining and Petrochemical Exhibition in Tehran and remarks by the Iranian oil chief that the Islamic Republic is ready to engage in talks with foreign countries on oil trade.

Abrar: “The eleventh government has based its appointment [of office holders] based on moderation and merit,” said President Hassan Rouhani in a cabinet session. 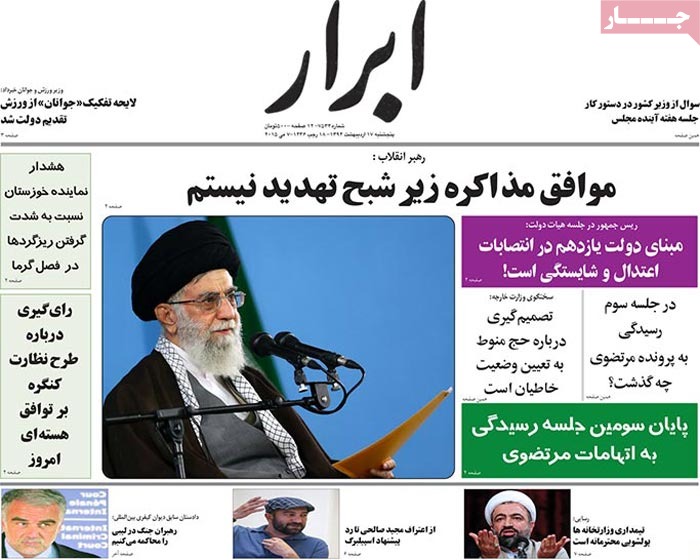 Abrar-e Eghtesadi: Despite a ban on imports, the Chinese hand-woven carpets found their way to the Iranian market! 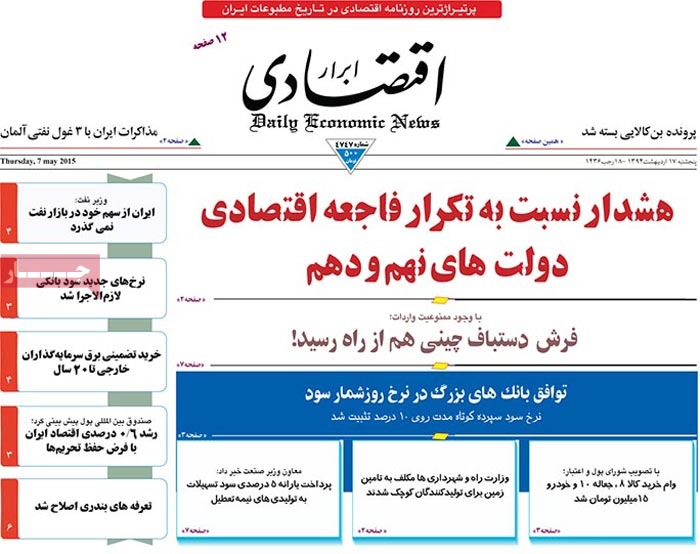 Aftab-e Yazd: “Money laundering in the ministry of science [under former President Mahmoud Ahmadinejad] was unprecedented in [Iranian] history,” said Gholam Reza Zarifian, a deputy science minister in the reformist cabinet in an exclusive interview with the daily.

Aftab-e Yazd: “The national medium [IRIB] is at the disposal of the opponents of the reformists,” said Mohammad Reza Aref, a reformist leader. 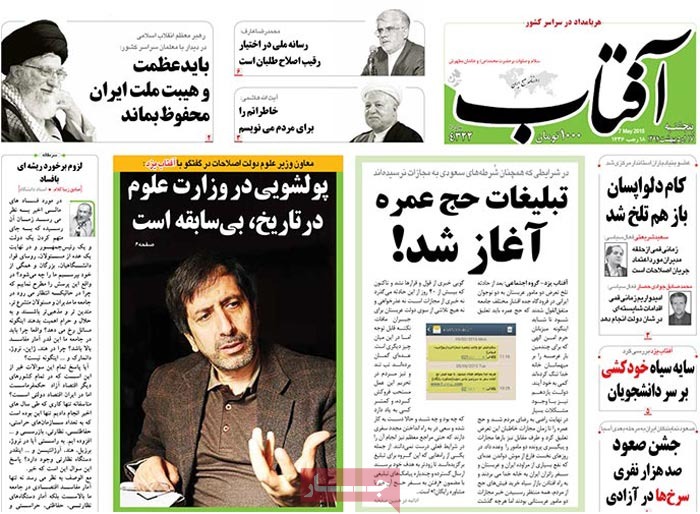 Arman-e Emrooz: Registration of those who run for [March 2016] parliamentary election will open on December 19. 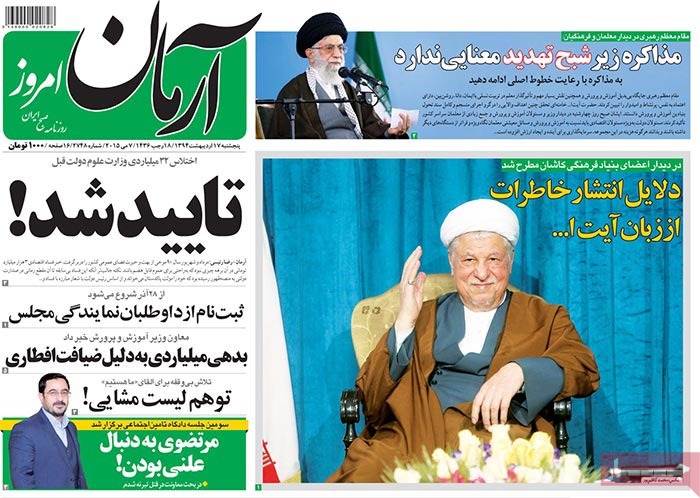 Ebtekar: “The Iranian nation will not tolerate talks under the shadow of threats”.

The Supreme Leader made the remark in a meeting with Iranian teachers from across the nation.

Ebtekar: “I am writing my memoirs for people,” said Chairman of the Expediency Council Ayatollah Akbar Hashemi Rafsanjani. 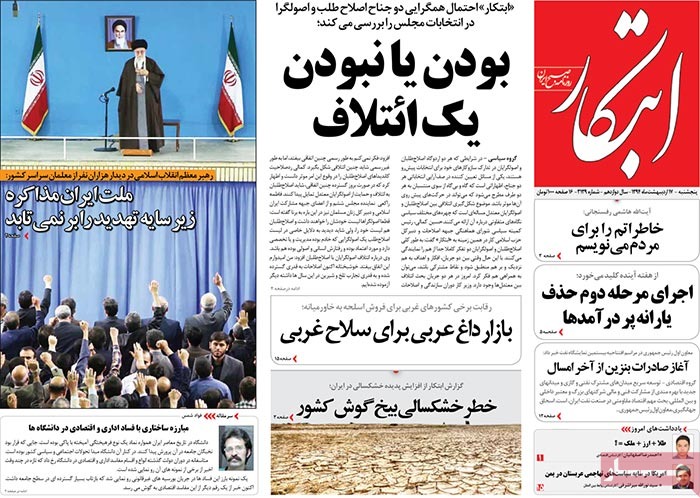 Oil Minister Bijan Namdar Zanganeh has said that Iran is ready for talks. His remarks come as foreign oil delegations arrive in Tehran [to take part in an International Oil, Gas, Refining and Petrochemical Exhibition.] 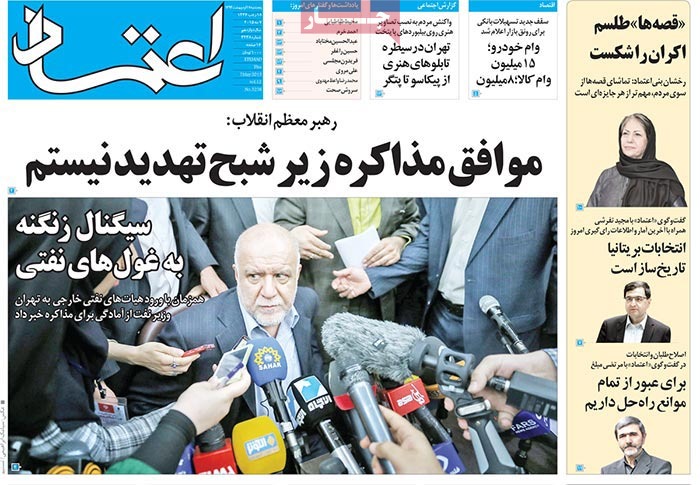 Ettela’at: “The Education [Ministry] needs fundamental changes, not superficial plans,” said the Supreme Leader in a meeting with teachers.

Ettela’at: “The improvement of business atmosphere is needed for economic growth”.

The first vice-president made the remark in the opening of the 20th International Oil, Gas, Refining and Petrochemical Exhibition. 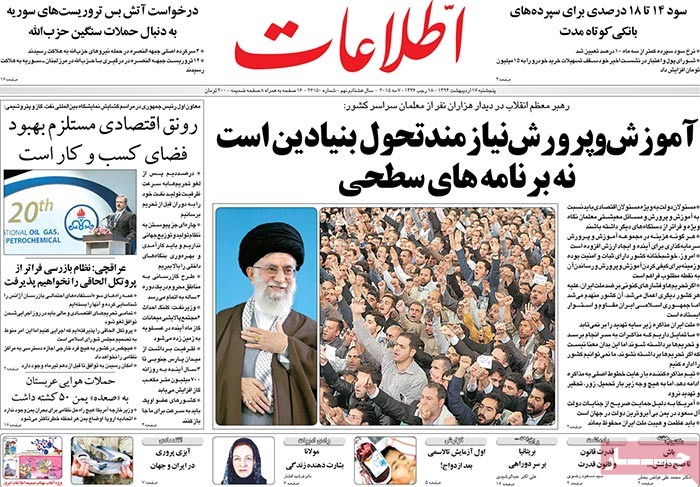 Hemayat: “The leaders of the Saudi regime should be put on trial like the Nazi criminals,” said Judiciary Chief Ayatollah Sadegh Amoli Larijani. 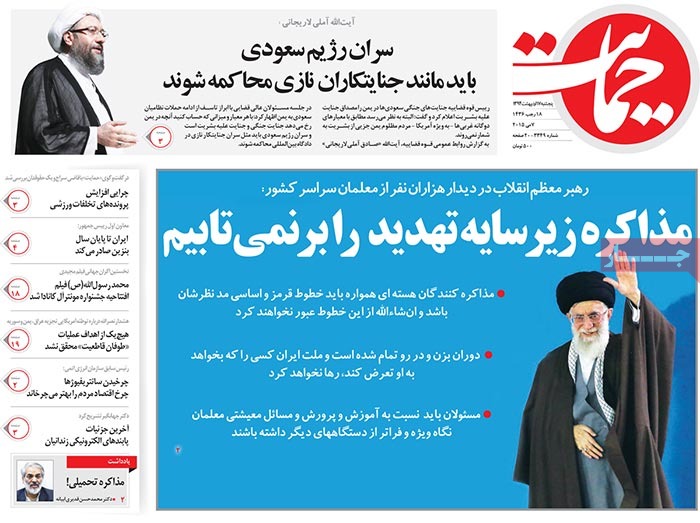 Iran: The presence of 600 foreign companies from 29 countries in the International Oil, Gas, Refining and Petrochemical Exhibition in Tehran 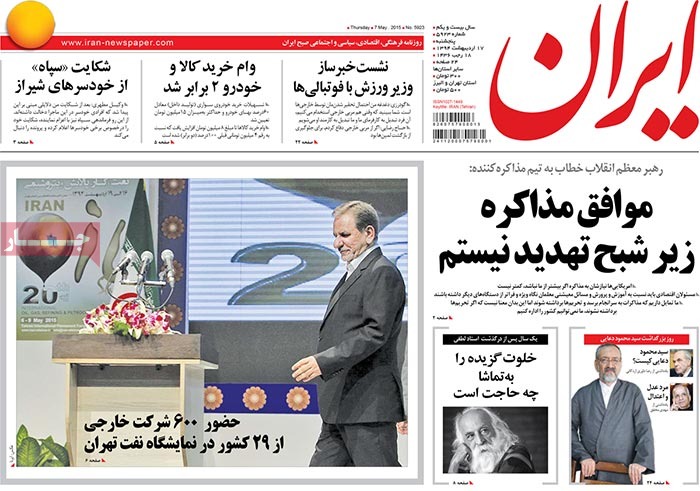 Jomhouri Islami: “Continue the nuclear talks, but do not give in to imposition [of sanctions], humiliation and threats.”

The Supreme Leader addressed the country’s officials in a meeting with thousands of teachers from across Iran. 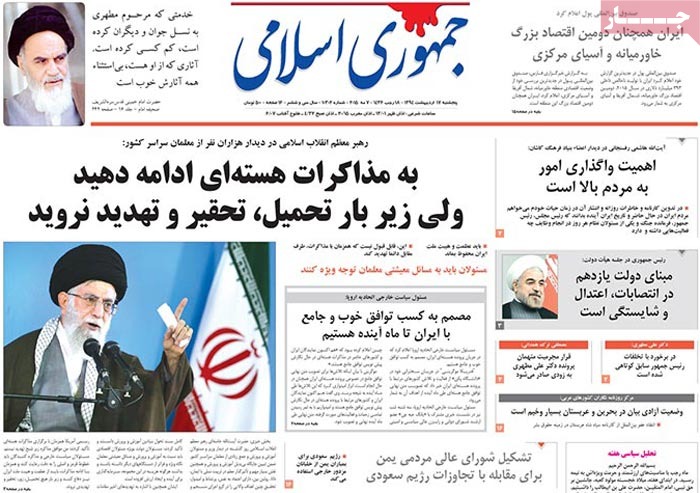 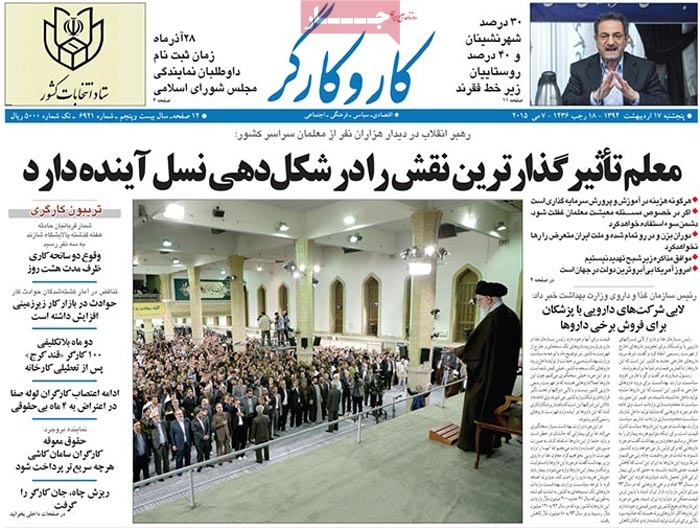 Kayhan: “We interact with foreigners although they left us alone,” said the oil minister.

Kayhan: “The revolutionaries in Yemen do not need arms [because] Ansarullah have taken over all garrisons [in the country],” said the Supreme Leader. 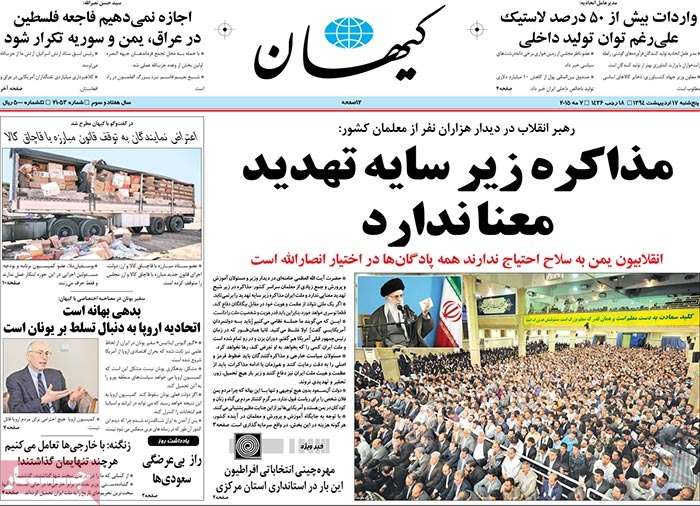 Qods: “Failure to pay due attention to the teachers’ pocketbook issues will play into the hands of the enemy,” said Supreme Leader Ayatollah Khamenei. 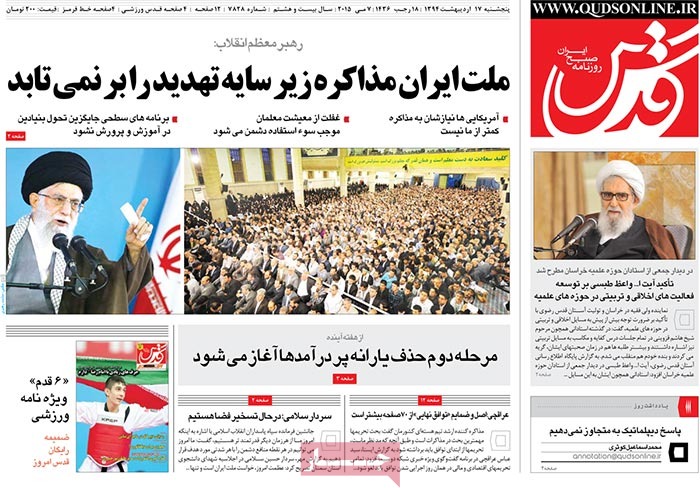 Rah-e Mardom: “The dignity and respect of the Iranian nation should remain protected,” said the Supreme Leader. 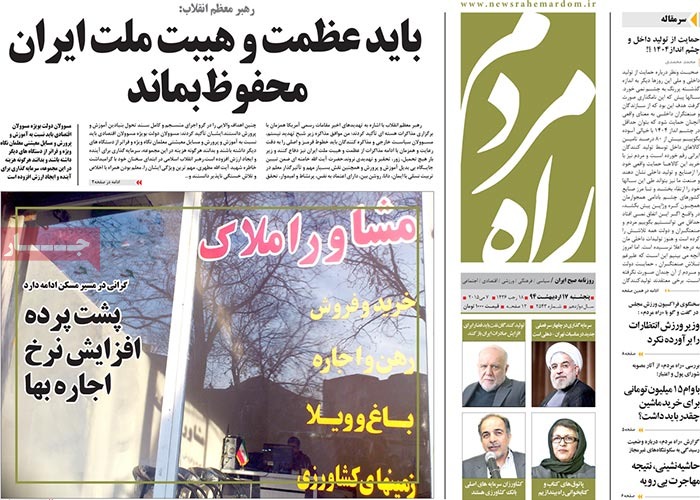 Roozan: An oil fever in Tehran 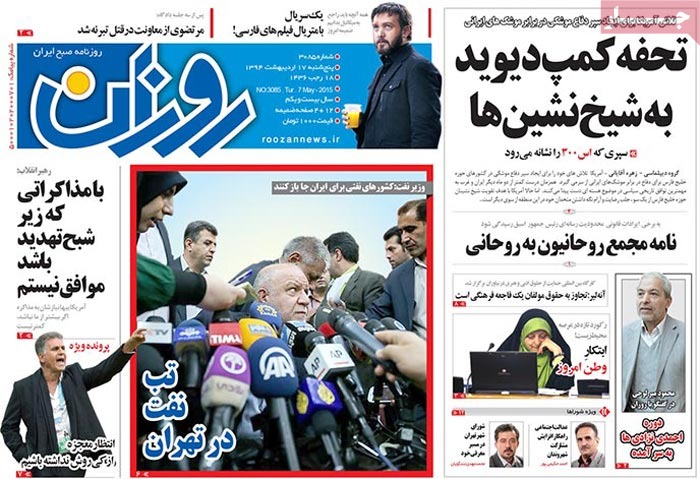 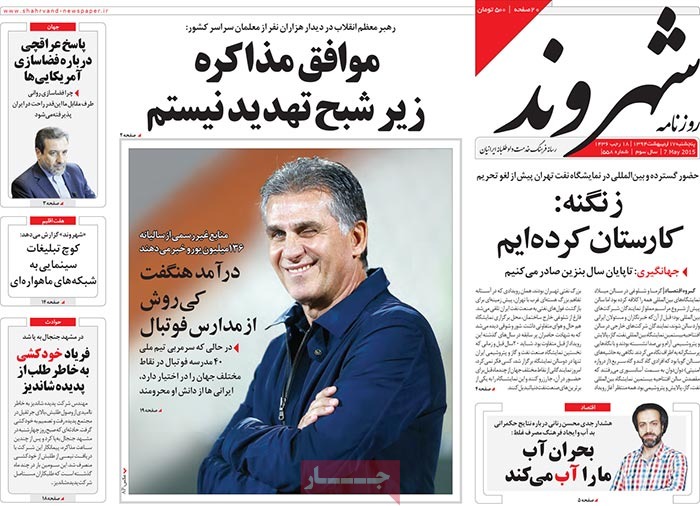 Sharq: “Working for the land of the brave is my honor,” said Foreign Minister Mohammad Javad Zarif. 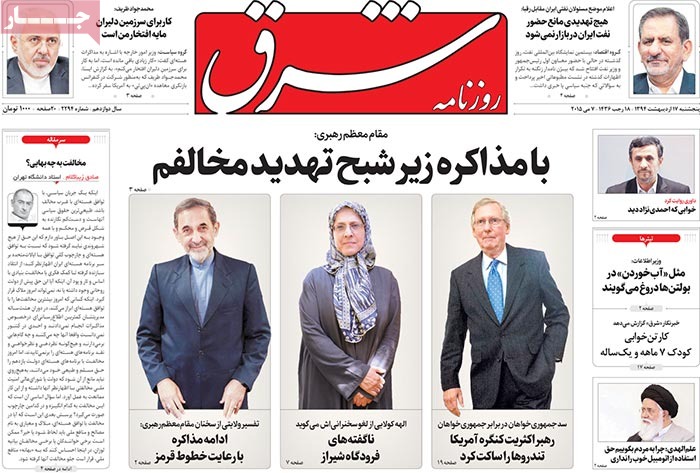 SMT: The first vice-president said in the opening ceremony of the 20th International Oil, Gas, Refining and Petrochemical Exhibition in Tehran that foreign capital will be funneled into Iran’s oil industry. 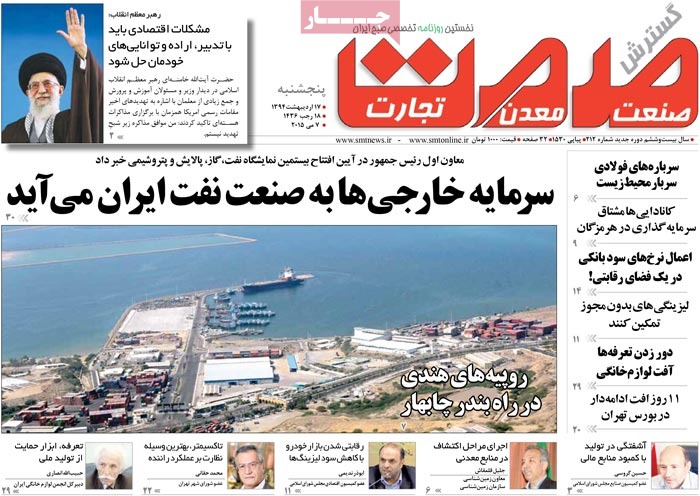