A look at Iranian newspaper front pages on Feb 10

IFP has taken a look at the front pages of Iran newspapers on Saturday and picked headlines from 18 of them. IFP has simply translated the headlines and does not vouch for their accuracy.

Bahman 22 (February 11) is marked as the anniversary of the victory of the 1979 Islamic Revolution. Iranians celebrate the day by street rallies every year to show the world they as ever before support the revolution despite all the economic hardships they have been going through since they overthrew the Shah. All the papers on February 10, 2016 published headlines calling on the people to renew their allegiance to the revolution by participating in the national rallies on Thursday.

On Tuesday, Iranian Minister of Petroleum Bijan Zangeneh held a press conference in which he outlined the ongoing developments in the country’s energy sector. He answered many questions by the reporters about a range of issues including details of new model of oil contracts, known at Iran IPC, and the latest updates about the country’s major oil and gas projects. Iran is now developing the world’s biggest gas field in Persian Gulf waters which is said to contain 8% of the world’s gas reserves. Zangeneh’s answers to different queries by the reporters where highlighted by most papers on Wednesday.

Iran is also trying Babak Zanjani for a major oil scam. Recently a wave of calls has begun asking maximum punishment for the guy for disrupting the country’s economy under the sanctions. Many papers covered this in their front pages as well.

Here are the highlights:

2. FM: Saudi troop to attack Syria at US suggestion

3. Rouhani: Win-Win will be the basis of Iran ties with world 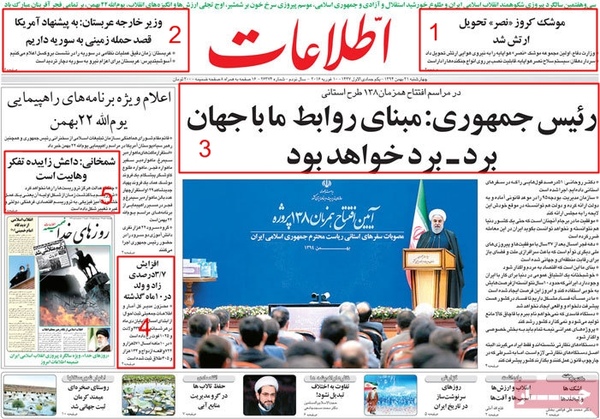 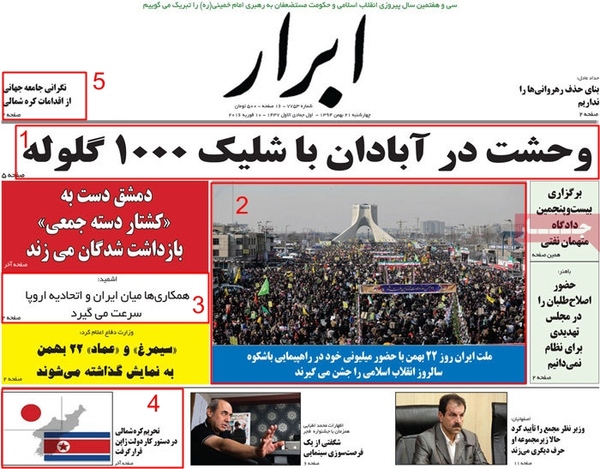 1. Hashemi is not alone…

2. “Principalists will be sunk in the see of election surprises”

3. Everyone will come tommorrow [Anniversary of the victory of the Islamic Revolution on 22nd of Bahman]

4. Smugglers poised to take New Year market for a ride

5. No more than 5 will win votes from this list [Principalists object the list of candidates presented by the coalition of factions] 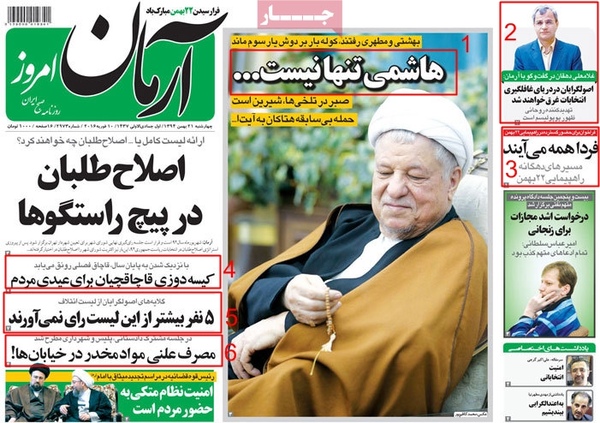 3. Oil Minister: We will not be adamant about IPC

Iranian Minister of Petroleum Bijan Zangeneh said his ministry will not be at loggerheads with dissenters about the new contract model, known as Iran Petroleum Contract or IPC. 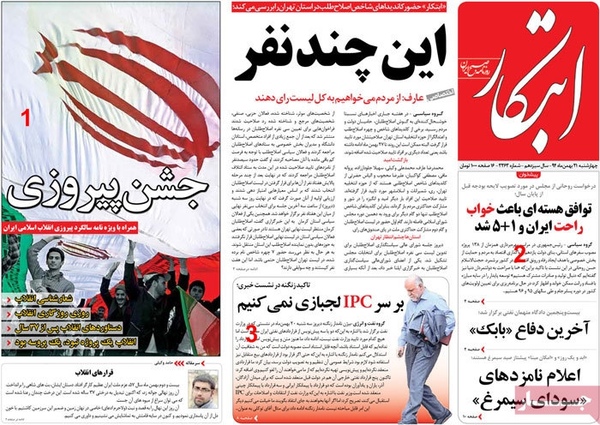 5. Trivial mistakes in talks could harm the nation: AEOI Chief 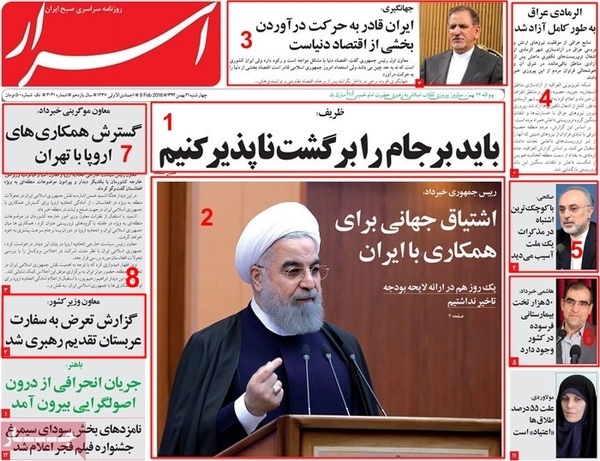 5. Next year national budget at odds with production, economic prosperity 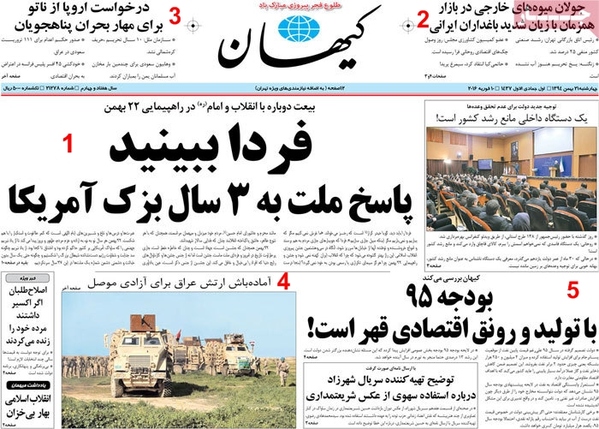 3. Oil industry will never stop running as long as I am in office: Iranian Petroleum Minister 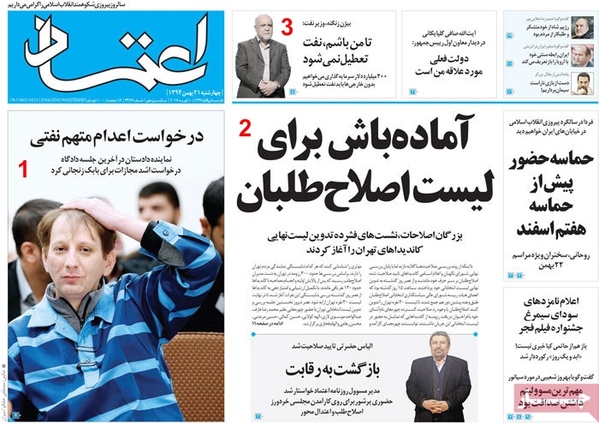 1. Day of unity; a report about reformists calling on the Iranian nation to participate in the 22nd Bahman rallies across the country 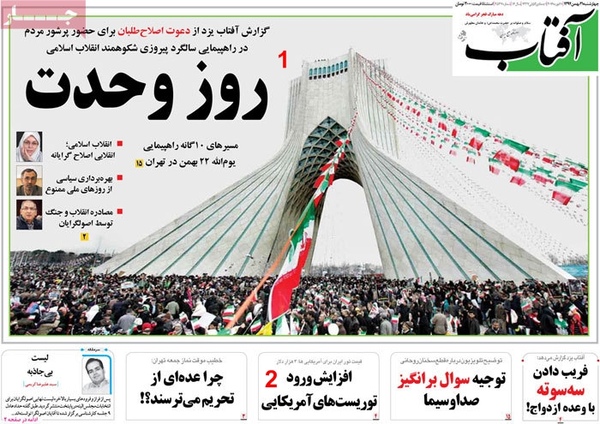 2. Putin: Turkey must take first step in normalization of ties 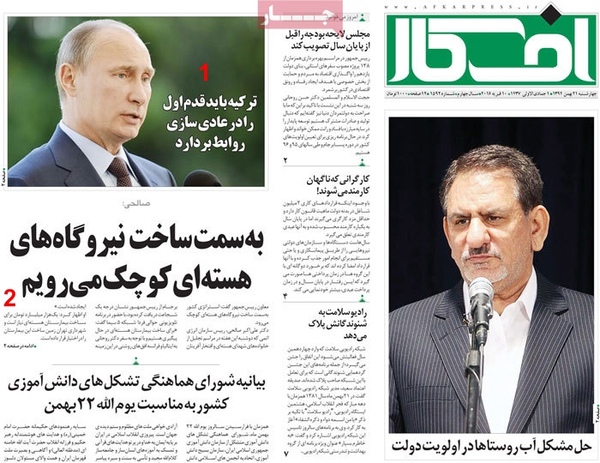 3. Iran to offer 4G internet to all major cities 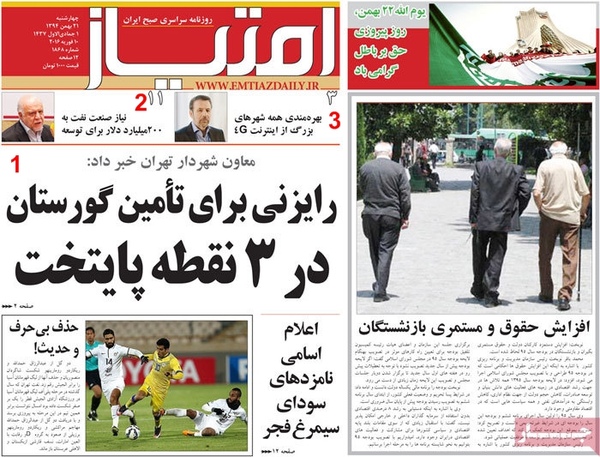 1. President Rouhani: We will not make promises that we cannot keep

2. Drug addiction cause of 55% of divorce files: Vice President 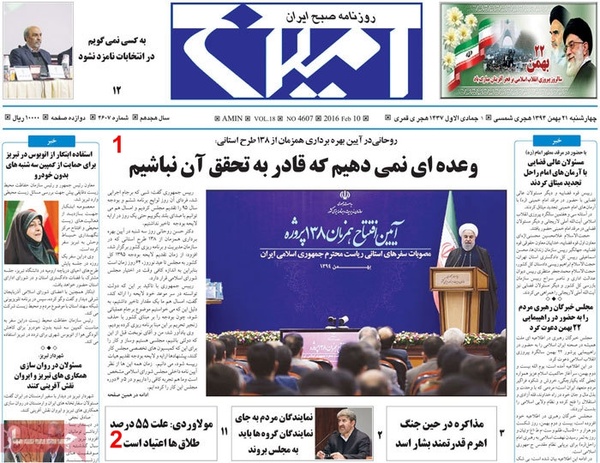 4.  Wealth of 62 magnates equal to wealth of half of the world population 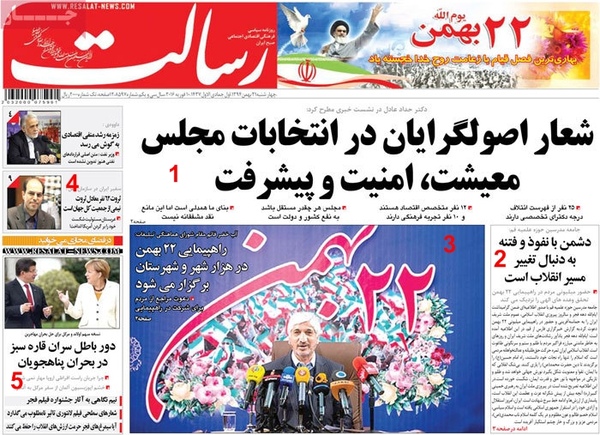 1. President: No development can be expected with corruption, monopoly

3. Call for all citizens to partake in Bahman 22 rallies 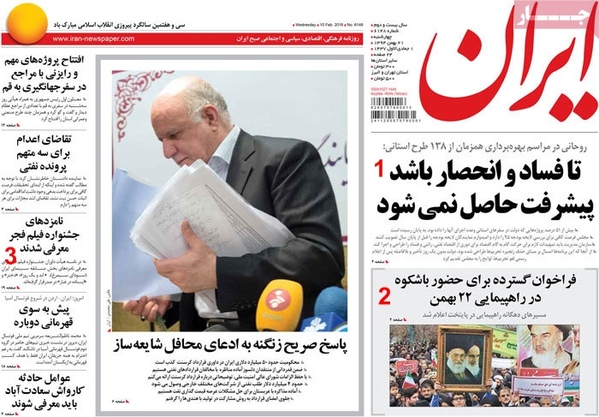 1. 70% satisfaction at healthcare services [in Iran]

2. Underground firms on the rise 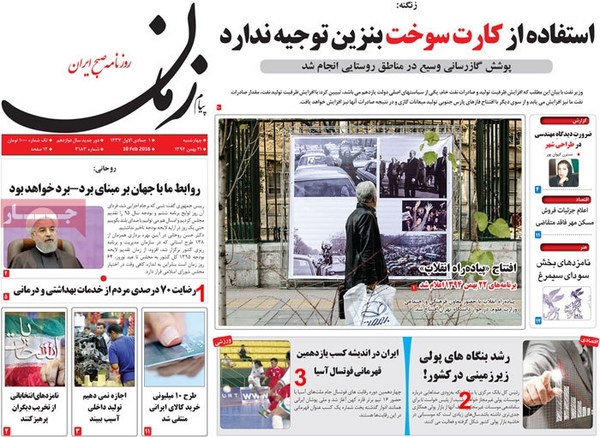 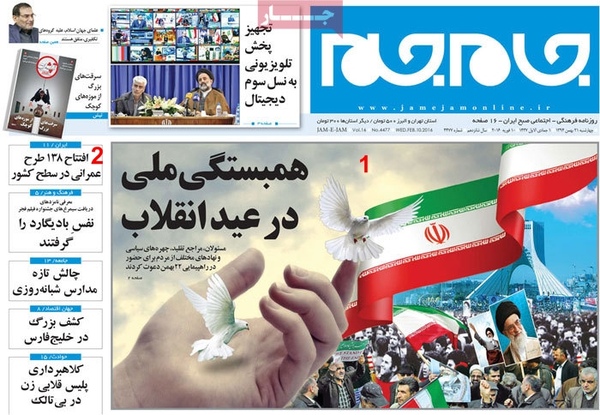 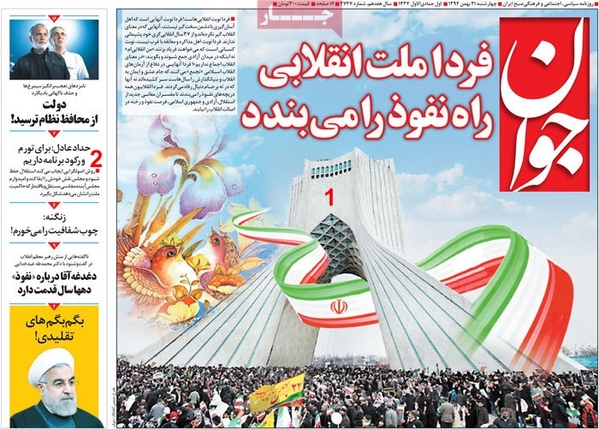 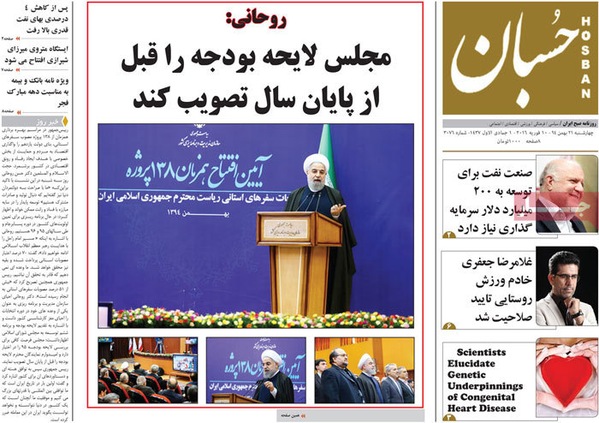 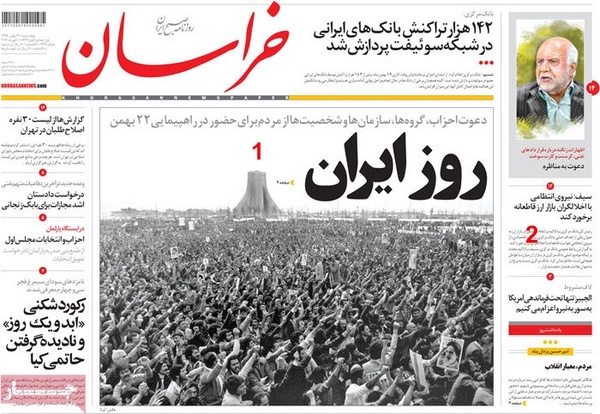 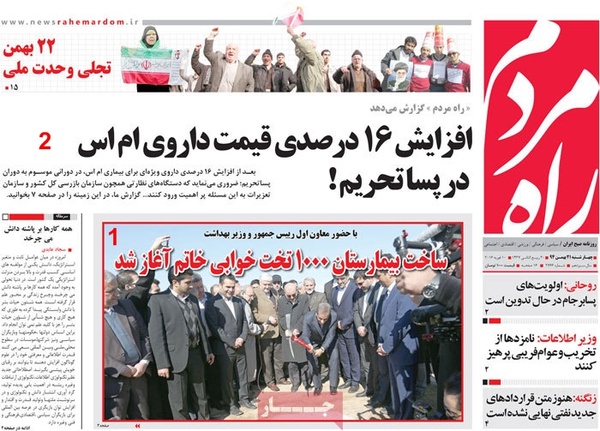 2. Ban on skyscrapers not retroactive 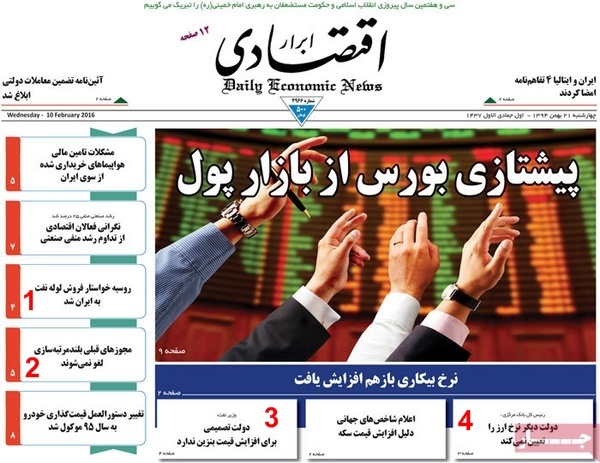 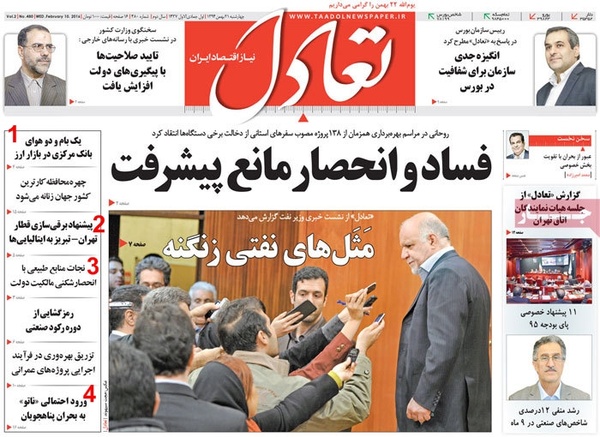