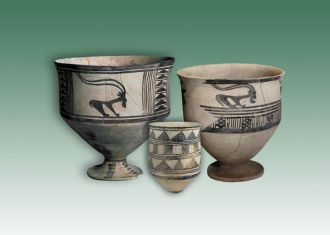 A group of fabric designers have created a collection inspired by motifs used on pottery previously discovered at the 7500-year-old Sialk Tepe near the central Iranian city of Kashan.

The collection, which was created by Elham Naderi, Hosna Elyasi, Armaghan Monshi and Raheleh Heidari, is currently on display in an exhibition at Tehran’s Shalman Gallery.

“This collection represents one of newest attitudes toward ancient art,” gallery director Ali Mazarei told the Persian service of ISNA on Friday.

“Most of the designs have been created for women’s wear fabrics, and the designers and the gallery aim to familiarize people with the style and elegance of the ancient motifs,” he added.

“Years before the fifth millennium BC, people in the Iranian plateau began to live on the plains under new conditions that occurred following a climate change. One of the oldest plain habitations was in the Sialk region,” he stated.

Mazarei said that motifs of animals like horses, goats, ibex, deer, rabbits, and snakes had certain symbolic meanings in the art of the region.

“This exhibition is a new reflection of Iran’s rich culture,” he added.

The exhibition will run until May 28 at the gallery, which can be found at 27, Kavusi Alley, off Rudbar-Gharbi St. and Mirdamad Ave.

Sialk Tepe was excavated for the first time by French archaeologist Roman Ghirshman and his team in 1933 and then again in 1934 and 1937.

Sialk Tepe, believed to be the world’s oldest ziggurat, consists of two mounds known as northern and southern Sialk, which are located about 600 meters apart. The artifacts unearthed in the northern mound are more ancient than those of the southern one.

As early as 3200 BCE, inhabitants of Sialk used a type of script known as proto-Elamite, whose symbols combined pictograms and numerals. Sialk was eventually abandoned at the end of the Iron Age before the advent of the first Iranian dynasty, the Medes.

Recent studies by Iranian archaeologists indicate that the first houses were built at the Sialk site about 7500 years ago.