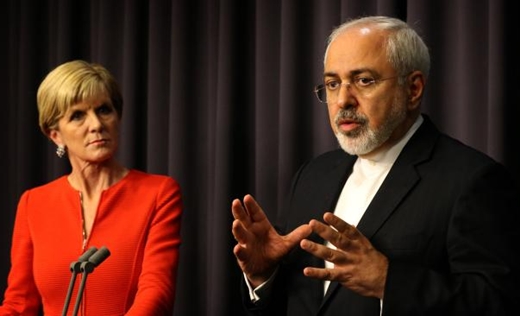 Iranian Foreign Minister Mohammad Javad Zarif has called for boosting bilateral cooperation with Australia in the battle against terrorism and extremism.

The Iranian foreign minister made the remarks during a joint press conference with his Australian counterpart Julie Bishop at the Parliament House in Canberra on Tuesday.

“We share the view that Daesh is a common enemy, nobody can look at Daesh as a possible leverage. We all need to cooperate together to fight Daesh and extremism,” he said, adding, “We have seen instances of that type of extremism creating crimes across the world from Sydney to San Bernardino and everywhere in between.”

The Iranian foreign minister also noted that the removal of anti-Iran sanctions has paved the way for further economic cooperation between Iran and Australia.

“We are happy that after the removal of sanctions Australia took the measures that were necessary, the legislation that was necessary were adopted here in Australia so now the road for cooperation between Iranian and Australian business communities is now open,” he said.

Broaching on Iran’s recent missile tests, he stressed that the launches were purely for self defense.

“We will not use those missiles against anybody except in self-defense. We challenge those who question our missiles program,” he stated.

For her part, Bishop congratulated Iran on the upcoming Iranian calendar New Year (starting on March 20), the successful parliamentary and Assembly of Experts elections and the conclusion of Iran’s nuclear deal with the world powers.

She also stressed that the battle against terrorism in Iraq and Syria is a matter of “common interest” for both countries.

Zarif is in Australia on a two-day visit on the last leg of his six-nation Asia-Pacific tour. He has met with Trade Minister Steven Michele Ciobo and held talks with the country’s Prime Minister Malcolm Turnbull.