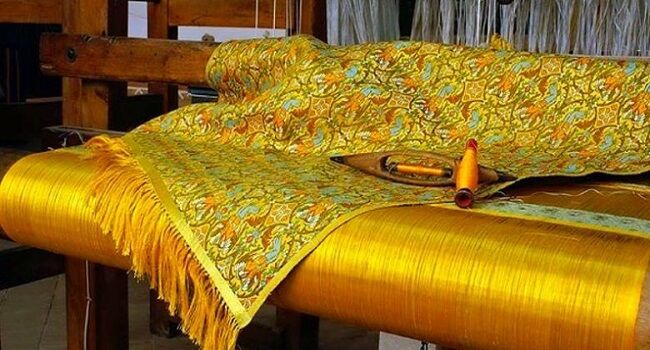 Zarbaft is the most exquisite and legendary Persian textile which was once a world-famous fabric.

Made of gold warps and silk wefts, the cloth is not very popular these days. Even billionaires do not go for this splendid fabric.

The history of making superb fabrics in Iran, as the first country to have developed the art, goes back to the Parthian era. Of course, not many fabrics have been left behind from the Achaemenid era. However, due to the fact that art of weaving exquisite cloth was a developing industry, we can say the art was well developed during the Achaemenid era, too, as were other forms of art. In fact, threads made of pure gold had been used in fabrics since the Parthian era.

This art was so popular during the Sassanid era that the country’s commercial boom was dependent on selling magnificent silk cloth, which was exported to the Far East, i.e., the Chinese Empire, and the Far West.

During the Safavid era, especially during the rule of King Abbas, some eight hundred people were working at the workshop belonging to the king’s court. Trade in exquisite fabrics was so prevalent that, at some point, the king ordered the fabrics not be sold domestically and only be exported.

A major part of the running costs of the ruling system was met by selling Zarbaft and other exquisite fabrics.

Now, only a very limited number of workshops in Iran produce these exquisite fabrics. Most of their products are archived and put aside, and there is no good market for them.
Some superb Persian-made fabrics left behind from Achaemenid, Sassanid and other eras are kept in well-known museums around the world.