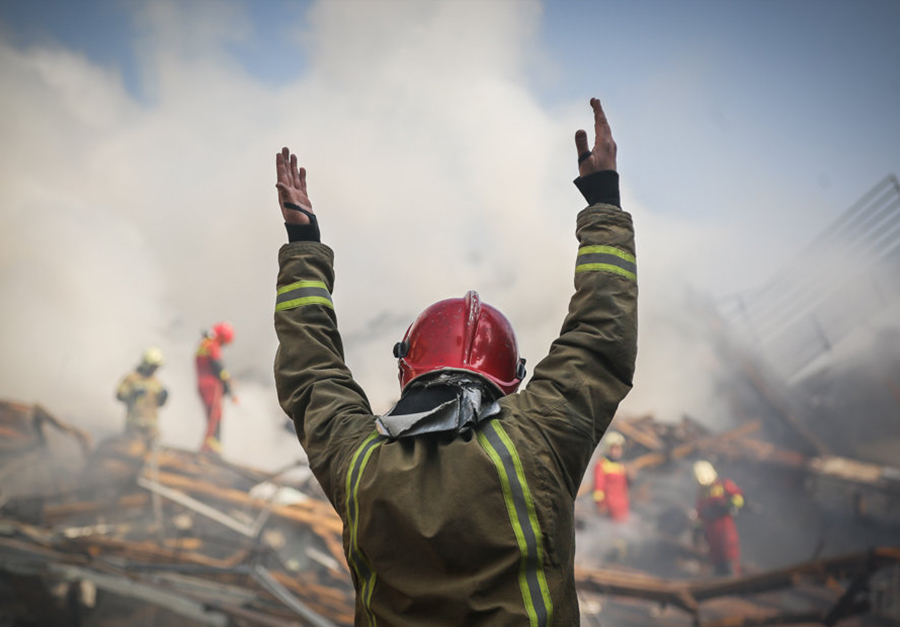 The deadly collapse of Iran's oldest high-rise building in downtown Tehran on Thursday morning has sparked emotional reactions from the international community.

Plasco shopping centre caught fire on early Thursday and came down only hours later, entrapping at least 25 people under the rubble, of which three are confirmed dead.

According to a report by IFP, the building came down at around 11:30 a.m. local time (0800 GMT), which was shown live on state television.

Following the tragic incident, many top foreign officials have expressed their condolences to the Iranian nation, officials, firefighters and families of the victims in separate messages.

In his message to President Rouhani, Belarusian President wrote: “I express my sympathy for the victims of Tehran’s high-rise collapse and convey my condolences to the Iranian nation.”

“Belarus received the news of the death of a number of Iranian citizens painfully and sorrowfully. On behalf of the Belarusian nation, I express my heartfelt condolences to the victims’ family members as well as relatives and deeply sympathize with Your Excellency and Iranian people,” Lukashenko noted.

France’s Ministry of Foreign Affairs and International Development also expressed great sorrow over the bitter incident and sympathized with the victims’ families.

A number of British officials, who were closely following the news of the incident due to the proximity of their country’s embassy to the scene, have also conveyed their condolences in separate messages. 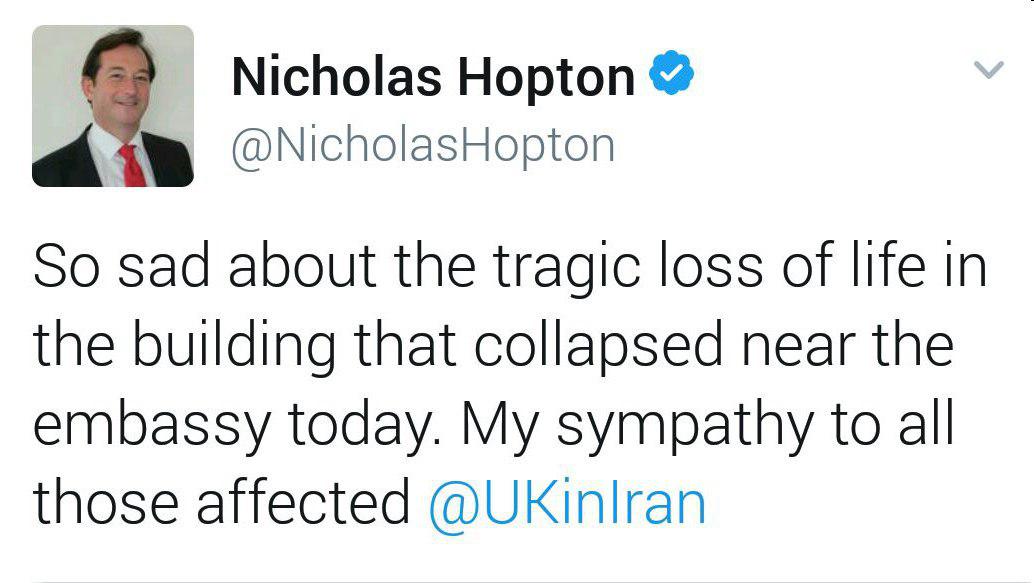 British Ambassador to Tehran Nicholas Hopton said, “So sad about the tragic loss of life in the building that collapsed near the embassy today. My sympathy to all those affected.” 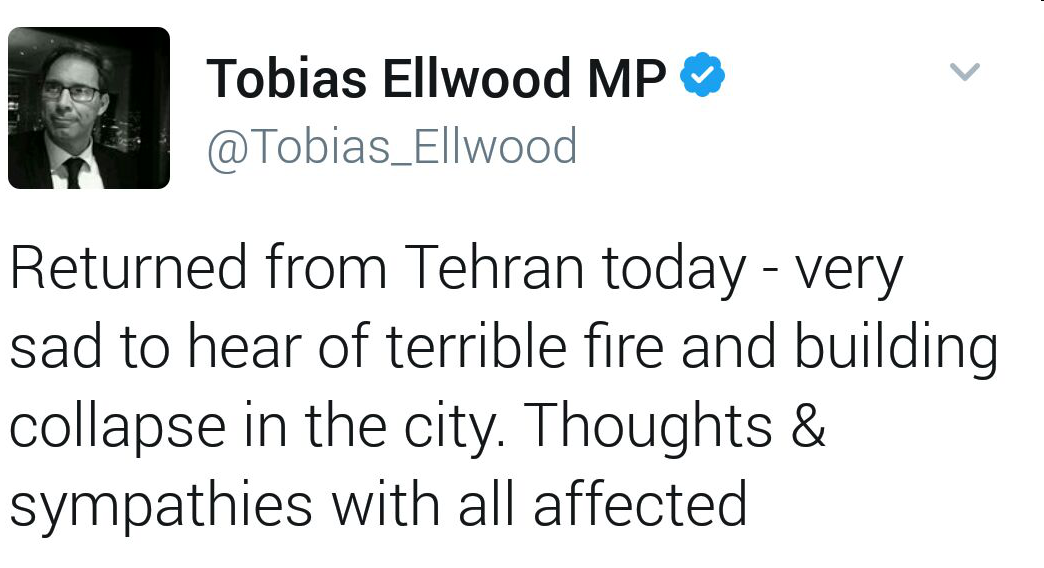 Tobias Ellwood, the British Minister for the Middle East, has also written in his message: “Returned from Tehran today — very sad to hear of terrible fire and building collapse in the city. Thoughts and sympathies with all affected.”

“We were shocked by the sad news. We are deeply sorry and sorrowful. What firefighters and rescue and relief forces do is quite risky and, sometimes, cost them their lives. The death of any of them is quite tragic for us and causes great heartache. We share the same deep sorrow with you [people of Iran],” Puchkov added.

Turkish Foreign Minister Mevlut Cavusoglu was also among the senior foreign officials who extended their condolences over the catastrophic event.

Condoling with the Iranian nation over the catastrophe, the representative of the Palestinian Resistance Movement Hamas in Iran, Khaled Qaddoumi, said in a statement, “We were following the news of the disastrous event in Hamas Islamic resistance Movement [office] since the very early minutes when it was announced that the Plasco building had caught fire.”

“We were watching the sacrifices made by the Iranian firefighters on TV, until the tower collapsed. We have heard that a number of these heroes have been trapped under the rubble and some have lost their lives.”

“Expressing our deepest sorrow at the occurrence of the terrible event, we would like to extend our sympathy to the victims’ families on behalf of the Palestinian nation and Hamas Islamic resistance Movement, and express our condolences over the demise of these beloved heroes to their colleagues, family members and Iran’s honourable people. We supplicate that God harbours them in heaven’s loftiest places and heals those injured in the catastrophic incident.” 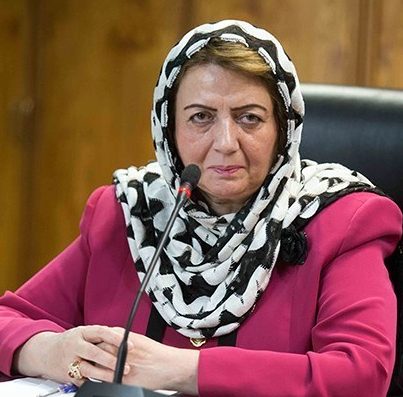 Also, Syrian parliament speaker, Hadiya Khalaf Abbas, said in a message to the Iranian Parliament, “I deeply condole with the Iranian nation, statesmen and top officials and victims’ families over the tragic event. I supplicate God to ensure the permanent health and safety of the Islamic Republic of Iran and its people, have mercy on the victims’ soul and give patience to their families.” 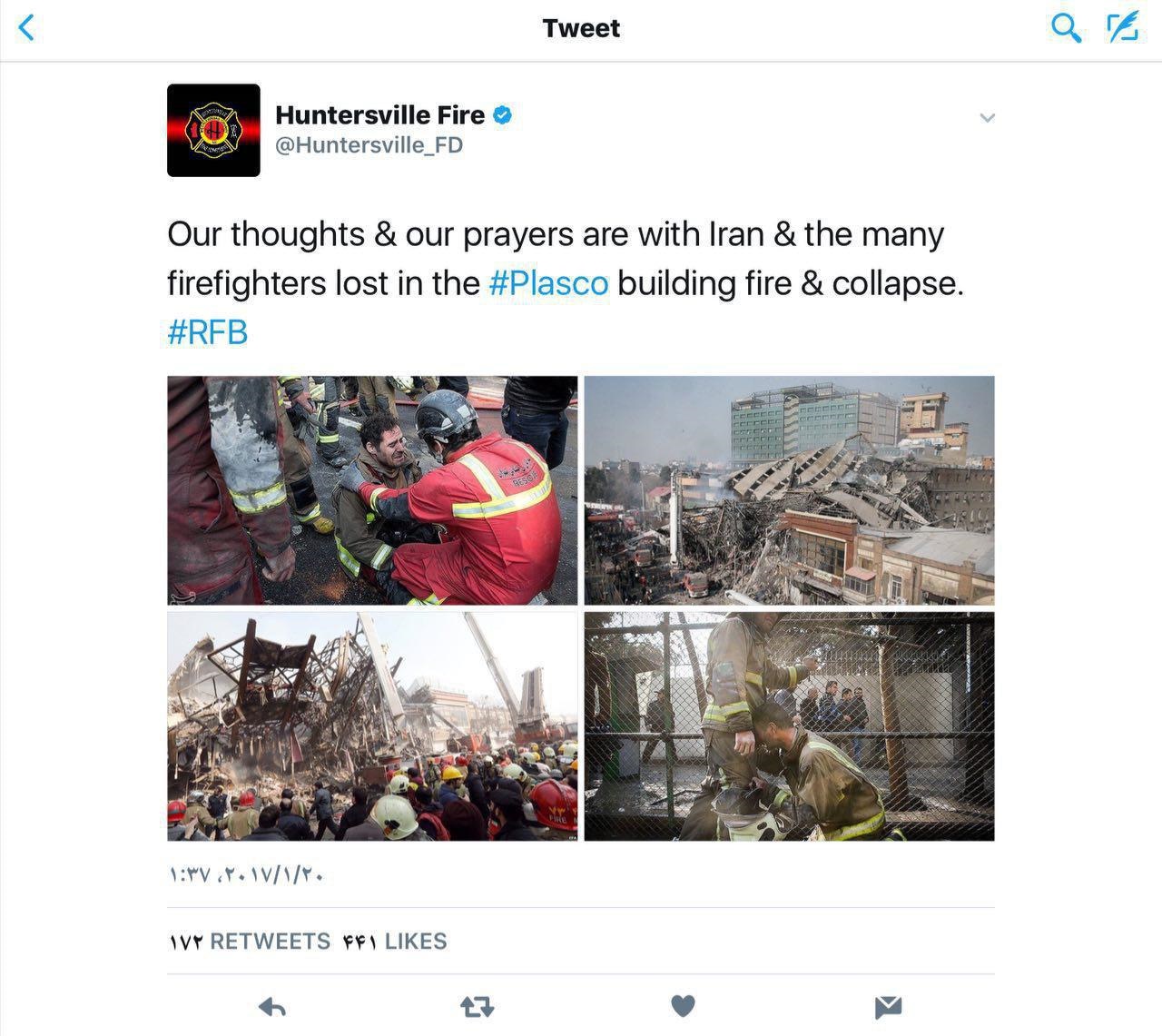 The North Carolina’s Huntersville Fire Department in a message said, “Our thoughts and prayers are with Iran and the many firefighters lost in the Plasco Building’s fire and collapse.” 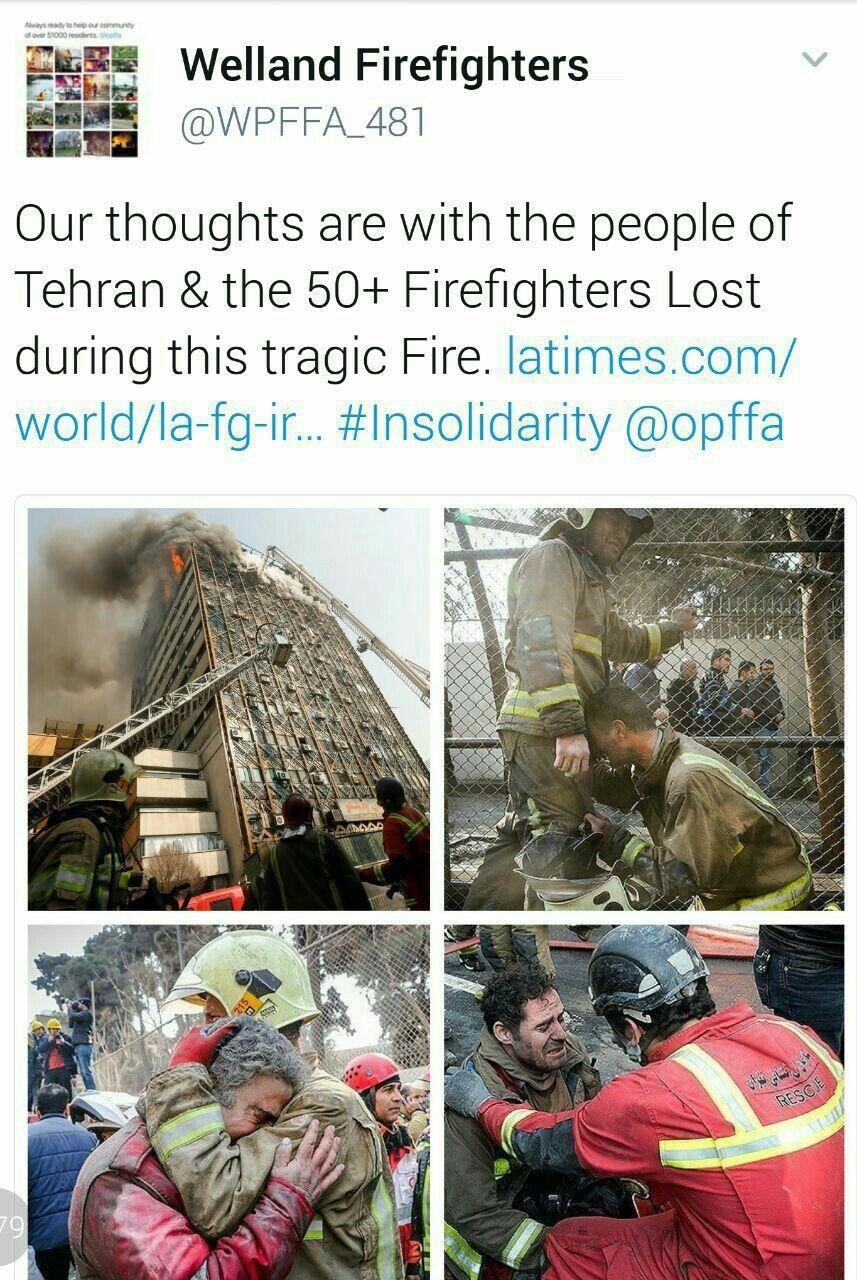 Canadian firefighters also said in a message that “Our thoughts are with the people of Tehran and the 50+ firefighters lost during this tragic fire.” 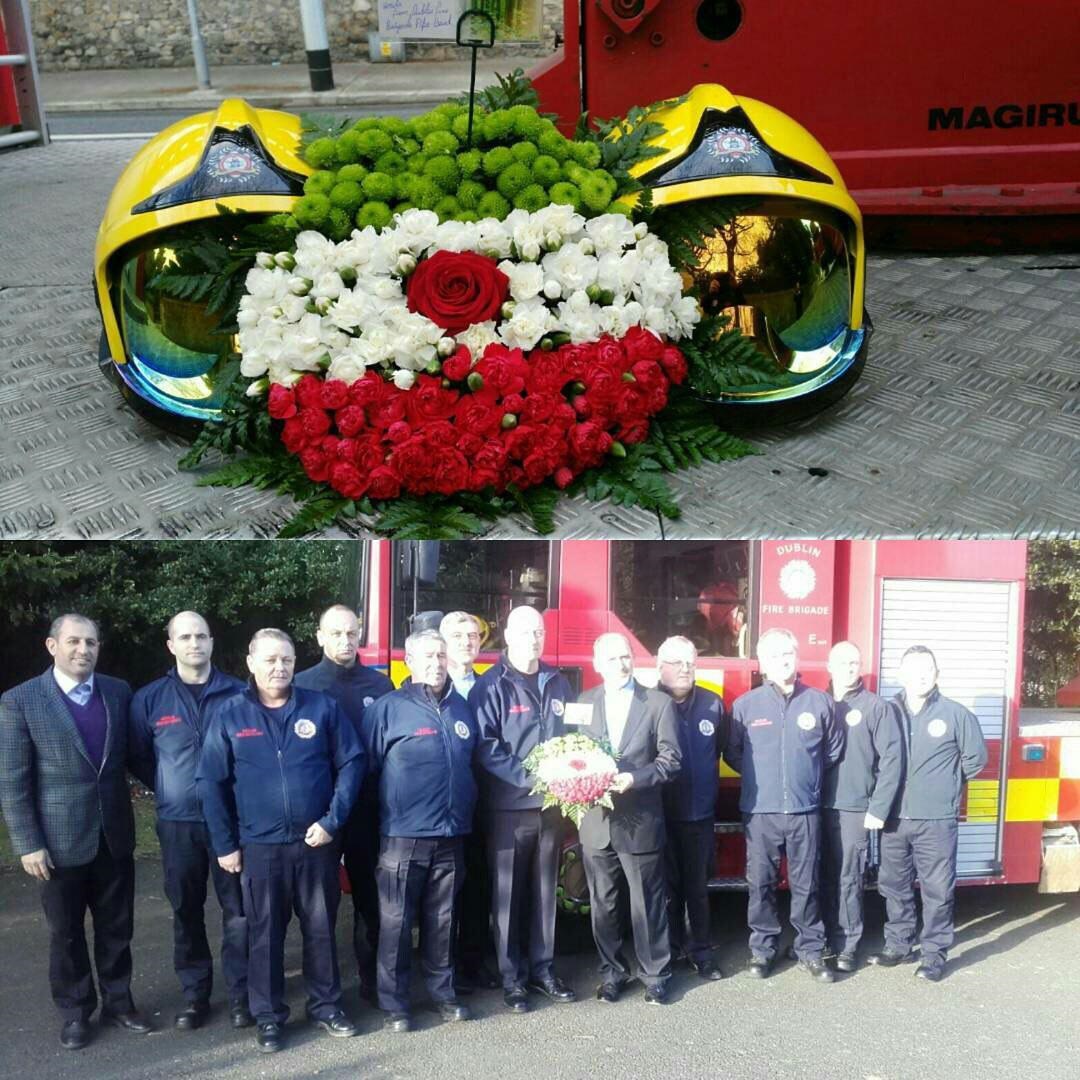 A number of Irish firefighters have accorded respect to their Iranian colleagues by publishing a photo of themselves holding a wreath arranged in a way to resemble Iran’s flag. 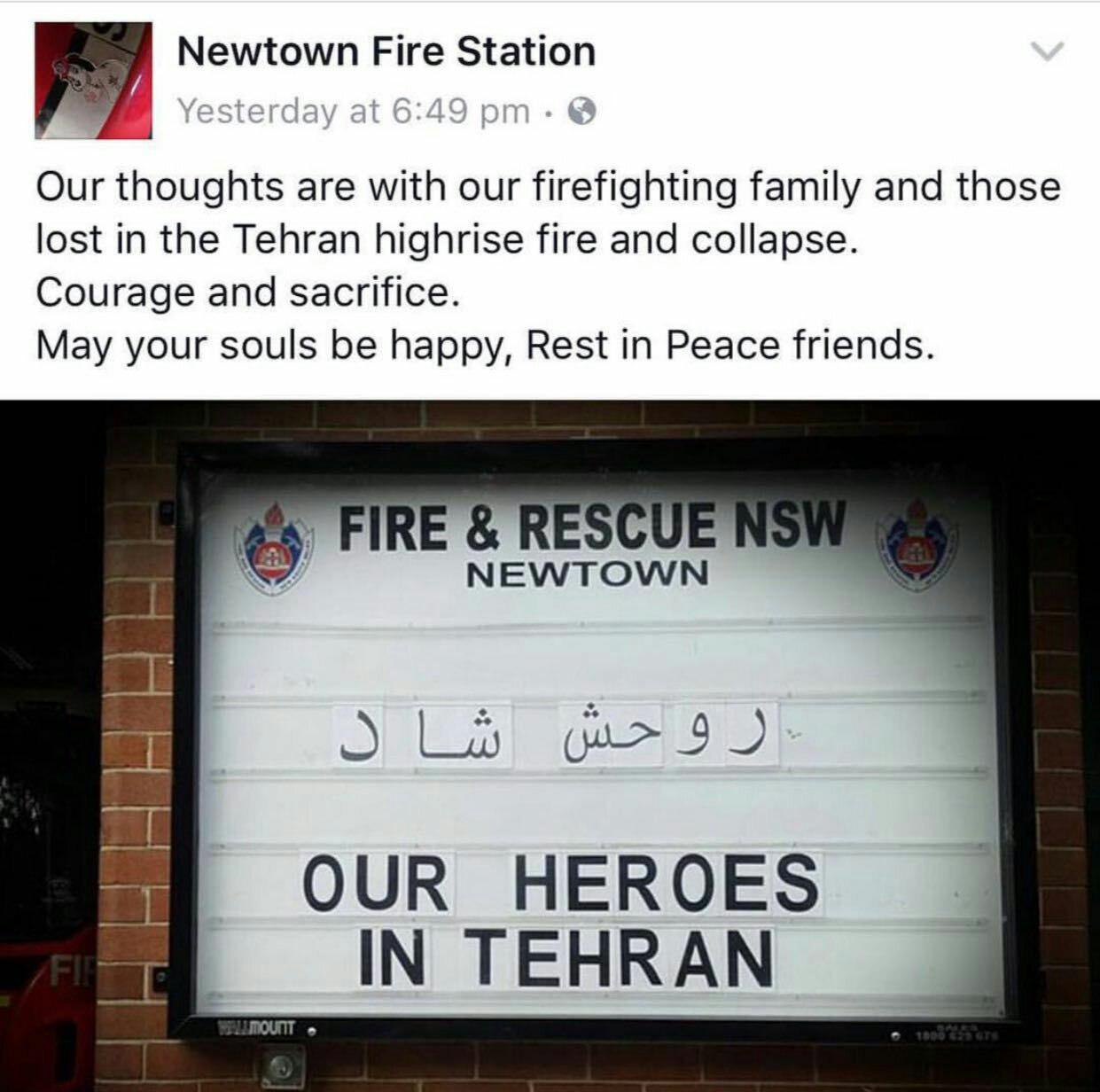 The Newtown Fire Station in Sydney also voiced its sympathy for the Iranian firefighters in message, saying, “Our thoughts are with our firefighting family and those lost in the Tehran high-rise fire and collapse. Courage and sacrifice. May your souls be happy. Rest in Peace friends.”

In addition, all Iranian embassies in other countries have flown Iran’s flags at half-mast as a mark of respect for the victims of the Plasco building’s collapse. They also plan to open memorial books.

Since Thursday, rescuers have been using life detection devices to locate possible survivors, and, according to the Mehr news agency, at least four responses have been picked up, likely indicating that at least four people are still alive.

While Tehran Mayor Mohammad Baqer Qalibaf had earlier said 20 firefighters lost their lives trying to contain the flames, Tehran Fire Department spokesman, Jalal Maleki, told the state TV that although a number of firefighters were presumed dead, no final figure could be given on fatalities.

A security official with Tehran Governor General’s Office, Mohsen Hamedani, said initial investigations suggest that the fire had been caused by a short circuit in the electrical system of the building, and was not of a security nature.

The building was one of the capital’s oldest high-rise buildings, which was housing 600 production workshops, 400 of which were being used for making shirts.

Earlier, it was reported that the nearby buildings including the embassies of Turkey, Germany and Britain have been evacuated following the incident. But later, the report was dismissed by Iran’s diplomatic police.