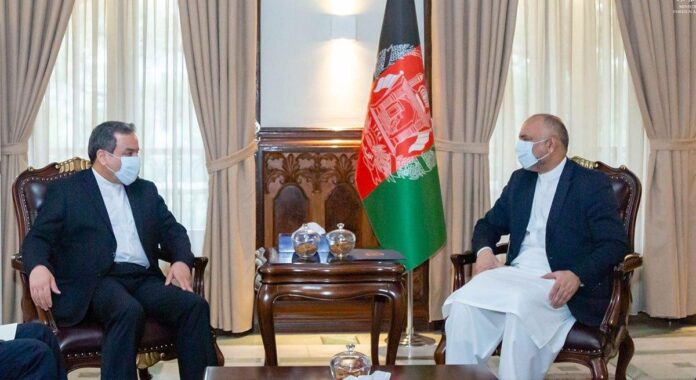 High-ranking officials from Iran and Afghanistan have discussed mutual cooperation on different fronts as well as a range of other issues.

The negotiations came in a meeting between Acting Foreign Minister of Afghanitan Hanif Atmar and Iranian Deputy Foreign Minister for Political Affairs Abbas Araqchi, who has travelled to Afghanistan heading a high-ranking delegation to follow up on the agreements already reached between the two countries during a recent meeting to Tehran by Atmar, especially to finalize the text of a comprehensive cooperation document between the two countries.

In the meeting, the two sides exchanged views on bilateral relations and the peace trend in Afghanistan as well as regional and international issues and problems, including the difficulties causes by the coronavirus pandemic.

The two sides also discussed bilateral and multilateral economic cooperation, including cooperation on trade via the Iranian port city of Chabahar as well as transit routes in Central Asia.

In the meeting, the two sides also agreed on a roadmap and the establishment of a timetable to finalize the comprehensive cooperation document.

The Iranian diplomat reiterated Tehran’s backing for a peace process owned and led by the Afghan government. He expressed hope intra-Afghan talks attended by all political parties in the country will get underway as soon as possible.

What is significant, said Araqchi, is to preserve the accomplishments of Afghan people after four decades of war, especially the Constitution and democratic structures created in the country during peace talks.

He recalled common concerns and interests that Iran and Afghanistan share as well as the facilitating role that neighbouring countries have in that regard, highlighting Iran’s preparedness to help the Afghan government advance the peace process.

During his trip, Araqchi is to sit down for talks with other senior Afghan authorities as well.