Why Syrian President’s Letter to Iran Leader Is Important 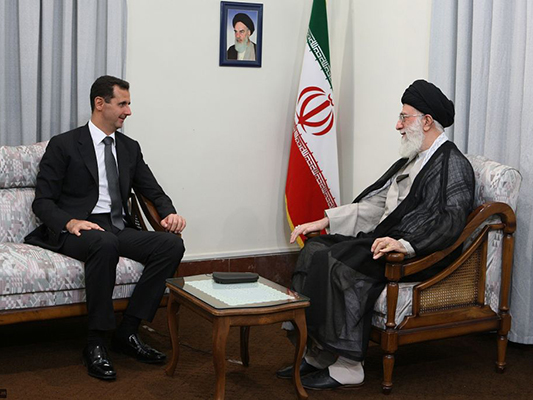 American politicians have confessed in recent days that they are no longer capable of removing Bashar al-Assad, and as one of them said they have lost the war to Ayatollah Khamenei.

Assad’s letter to Ayatollah Khamenei is an example of regional crisis management led by the Leader of the Islamic Revolution of Iran and is a very important letter containing significant points that will be remembered in the history of Iran-Syria relations.

To find out the significance of what Assad has announced, one must get back to seven years ago when in December 2010 the self-immolation of a young Tunisian vendor led to the overthrow of Ben Ali’s 24-year rule and his escape along with his family to Saudi Arabia, which in a short while was followed by the overthrow of the Egyptian and Libyan governments.

The United States and its Arab allies who were shocked by these developments, which later was called the Arab Spring (or Islamic Awakening), sought to manage the crisis and spill it over to Syria that was on the frontline of resistance against the Zionist regime. They also wanted to thwart the most revolutionary Arab state and create a protective shield for some regional countries, especially Saudi Arabia.

Accordingly, dozens of terrorist groups were created to be dispatched to Syria with the support and management of the United States and the financing of the Saudis. Thus, such terrorist groups as ISIS, al-Nusra Front, etc., helped by US-led Western-backed countries and Saudi Arabia, waged a proxy war. In this way, a crisis which lasted for about seven years was created. The leaders of this conspiracy would prefer the removal of Bashar al-Assad from power and a power transfer without providing any logical reasoning or better option.

The conditions of the region and the immense support for the opposition groups were so widespread and unprecedented that no optimistic analyst could predict the victory of Assad in this unequal battle.

Although Iran from the very beginning believed in a spiritual support for Bashar al-Assad due to the legitimacy of his government, it did not see any reasons for entering the war because it believed that Assad could overcome his opponents with his popular base.

But the interference and the proxy war of regional and trans-regional powers prompted the Leader of Iran’s Islamic Revolution to defend and support Iran’s long-standing ally and friend who was unjustly suppressed.

Iran’s support, next to its advisory presence in Syria, led to the creation of a powerful political bloc that included Russia, and could practically neutralise US plot in the UN Security Council.

Iran’s field support besides the presence of volunteer forces, who could target the weak points of the terrorists, helped Bashar al-Assad gain the upper hand in fight against his opponents. Meanwhile, the terrorist groups, in spite of committing inhumane crimes approved by the US, left the battlefield to the government forces day after another.

While at the initial and secondary meetings of Geneva, the global arrogance was humiliating the administration of Assad, the prudence of the Leader of the Islamic Revolution and the confidence given not only to the government of Syria, but also to the army and the Syrian fighters through Iran’s Islamic Revolution Guards Corps (IRGC) and popular forces brought a new victory for the Syrian government every day.

Now that the 6th round of Astana Talks on Syria has been held, there is no word of the future Syrian government, but instead they all emphasise the political unity of Syria and call the fight against terrorism as their first priority.

American politicians have confessed in recent days that they are no longer capable of removing Bashar al-Assad, admitting that talking about Assad’s removal is nonsense, and as one of them said, they have lost the war to Ayatollah Khamenei.

The prudence of Ayatollah Khamenei not only preserved the rule of Bashar al-Assad and stopped the expansion of terrorism, but also was turned into a powerful backing for the Iran’s diplomacy.