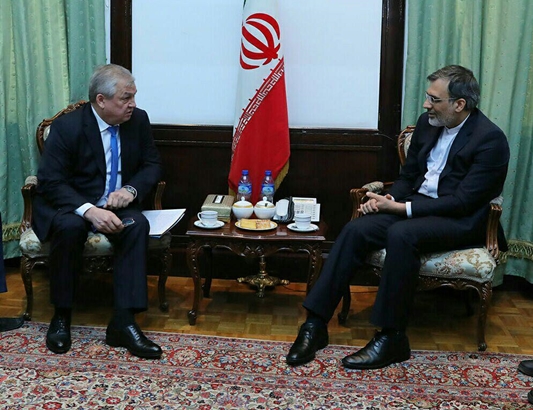 Hossein Jaberi Ansari, a senior assistant to Iran's foreign minister in special political affairs, has held separate talks with delegations from China, Russia, and Germany in Tehran on the issue of Syria.

The Iranian official discussed the latest developments in Syria and the region in his meetings with Chinese Assistant Minister of Foreign Affairs Chen Xiaodong; the Russian president’s special envoy for Syria Alexander Lavrentiev; and the German foreign ministry’s director‑general for political affairs Philipp Ackermann.

In these separate meetings, which were held on Tuesday and Wednesday, various issues related to the Syria crisis were discussed, including the formation of the country’s constitutional committee, the fight against terrorism, preventing a humanitarian disaster from happening in Idlib, the reconstruction of Syria, and the return of displaced Syrians to their homeland.

The diplomats also agreed to continue these bilateral negotiations in the near future.

Over the past years, Iran and Russia have been respectively lending military advisory support and aerial backup to the Syrian military in its battle against militants and Takfiri terrorists. The foreign-backed groups started a campaign of bloodshed and destruction against the Arab country in 2011.

Iran, Russia and Turkey, known as the guarantor states of a ceasefire regime in Syria, have been mediating peace negotiations between representatives from the Damascus government and opposition groups in a series of talks held in the Kazakh capital of Astana and other places since January 2017.