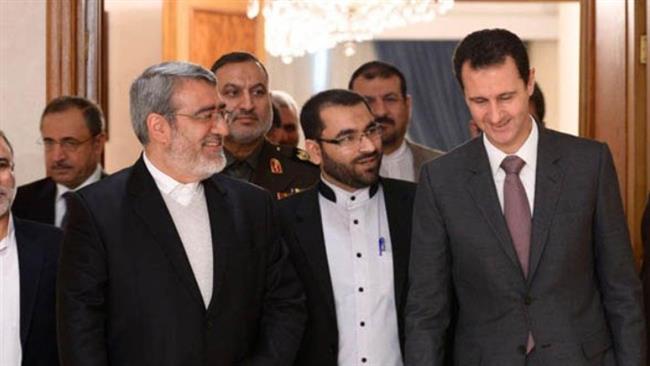 Fazli made the remarks in a meeting with Syrian President Bashar al-Assad in the Syrian capital, Damascus, on Tuesday.

He said the Islamic Republic is steadfast in assisting the Syrian government.

The two discussed the strong and strategic bilateral ties and mutual cooperation between Iran and Syria, especially in the field of fighting terrorism.

The Syrian head of state said, “Friendly countries, especially Iran and Russia, have, over five years, played an essential role in the Syrians’ perseverance and firmness and achievement of victories in the fateful war against Takfiri terrorism.”

Iran maintains advisory presence in Syria as means of reinvigorating Damascus’ fight against terror. Moscow began an aerial campaign against terrorists in Syria on September 30, 2016 upon a request from the Damascus government.

The foreign-sponsored conflict in Syria has claimed the lives of more than 260,000 people and left over one million injured since March 2011. The crisis has also displaced nearly half of the country’s population.

In their Tuesday meeting, Rahmani Fazli and Assad also pointed to some regional countries’ provision of support for the terrorist groups operating in Syria, and their obstruction of a peaceful resolution of the crisis in the Arab country.

The US and its regional allies, namely Saudi Arabia, Turkey, and Qatar, are known as some of the main supporters of the militants fighting the Syrian government.