What Saudi Arabia Did to Yemeni Lions 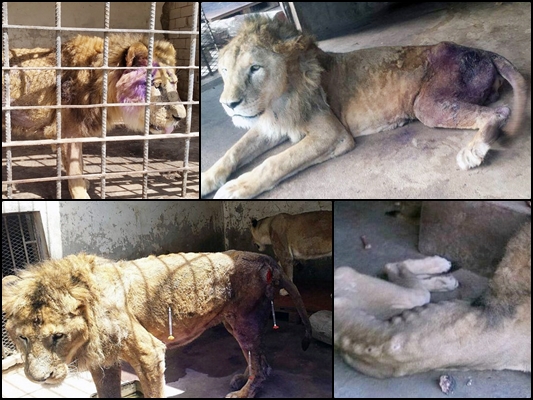 Animals in a zoo in Yemeni city of Ta’iz, particularly a poor lion, are suffering from adverse conditions caused by an ongoing war waged by Saudi Arabia and its allies on Yemen.

Covered in scratches and nothing but skin and bone, a once noble lion is trapped and lonely in the middle of a warzone.

Stuck behind bars, the lion at Ta’iz Zoo in war-torn Yemen roars pathetically from inside his cage, according to media reports covered by Al Alam News Network.

But in the middle of air raids and tank shells, one man and a small group of volunteers cross the front line every day to go and care for the animals of the zoo.

Bassam Al-Hakimi, 25, once owned an internet café that has been destroyed. He was an industrial engineering student before the conflict.

But now he is helping Chantal Jonkergouw and Victoria Johner y Cruz from the SOS Zoo and Bear Rescue Group – bringing funds from donors around the world to try to prevent the zoo’s 266 animals from starving to death.

Before donations started being raised, 12 lions and six leopards had already died of starvation.

Since February they have raised nearly $70,000 (£50,000) and Bassam, who works at Tamdeen Youth Foundation in Yemen, incredibly crosses the front line every day to help the animals.

“The zoo is about five kilometres (three miles) from the front line. About two months ago, the Saudi Air Force bombed a tank belonging to Houthi forces stationed near the zoo causing an explosion and flying debris which damaged the snake cage,” he said.

“A lot of my friends have been killed in the war. In the zoo there is no danger, but we have to cross the front line and are right in the middle of the two fighting forces. A friend of mine was killed walking next to me.”

Saudi Arabia and its allies launched military attacks on Yemen in March 2015 in an attempt to bring its ally, the former Yemeni President Mansour Hadi, back to power.

More than 10,000 people have been killed in the aggression since then.