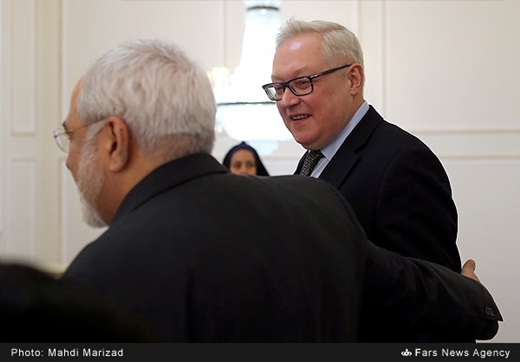 Aftab-e Yazd, a reformist daily, looks into reasons why the Russian deputy foreign minister has come to Tehran two days before the resumption of nuclear talks.

When marathon nuclear talks between Iran and P5+1 reopen in Geneva [on January 18] all eyes will turn to the Swiss city that hosts the negotiations. Although Iran and world powers agreed to extend the negotiations after intense talks in Vienna for another seven months, parties to the talks underline the need for the conclusiveness of the talks ahead of the deadline [July 1, 2015].

A meeting between the Iranian and US top diplomats on January 14 will mark the beginning of a second round of talks since the previous deadline of November 24, 2014 deadline. A similar meeting between Mohammad Javad Zarif and John Kerry in Vienna last year raised hopes of a breakthrough in the talks.

Russia’s Deputy Foreign Minister Sergey Ryabkov arrived in Tehran on January 12. Given Russia’s fence-sitting role in the critical Vienna talks, the trip two days ahead of the resumption of nuclear talks calls for sober reflection.

Ryabkov’s trip is meant to signal this message to Tehran that Moscow attaches great importance to Iran’s nuclear case.

Aftab-e Yazd, a reformist daily, carried an article by Zahra Badamchi on January 11 on the role Moscow has played in Iran-5+1 talks and speculations about the future behavior of Moscow in its interaction with Iran and the West. The following is the translation of the article:

Heshmatollah Falahatpisheh, an international relations expert [and a former MP], says that the trip revolves more on the fresh round of nuclear talks between Iran and P5+1 than on bilateral ties. He says Russia is an [international] player that has in the past joined the US to vote against the Islamic Republic on six critical occasions.

In an interview with Aftab-e Yazd, a reformist daily, Falahatpisheh cast doubts on the steadfastness of the Russians, saying, “Iran is separately pursuing its nuclear case with the US, and other countries including Russia have failed to adopt an active line. During the talks, the Russians have always opted for a double-standard policy.”

Russia wants the talks to drag on

Russia showed during the Vienna-VIII talks that it is in favor of the current trend in the talks and wants Iran’s nuclear case to drag on.

This is what Elaheh Koulaei, a university professor, highlights. She says that the Russian approach shows it is willing to see nuclear talks continue without reaching any settlement. “Maintaining the status quo is an ideal option for Russia.”

Iran, a serious rival for Russia in uranium exports

Analysts hold that uranium exports in the region are one of the reasons behind Russia’s opposition to conclusion of the talks. Iran would break the Russian uranium monopoly if its talks with the West end conclusively. Naturally, Russia – which seeks to provide Iran’s uranium – won’t support any agreement that may let Iran provide fuel for its own power plants.

Russia has a monopoly on Iranian market on different fronts, including nuclear facilities. If nuclear talks bear fruit, Iran can reach out to high-tech countries and this is not what Russia wants.

Energy has given Russia an edge over the West. Russia is one of Europe’s biggest oil and gas suppliers. Closing off gas taps to Europe could be a major deterrence in its dealing with the West. The end of Iran’s nuclear dispute is likely to help Europe decide to meet its gas demands through Iran, something which will blunt Russia’s edge.

Currently Russia is on a collision course with the US over Ukraine. The souring of ties, unprecedented in recent years, has seen the West impose economic sanctions on Russia in reaction to Moscow’s measures in Ukraine.

Ties became more strained when the Russian Foreign Ministry announced in late 2014 that expanded US sanctions against Moscow could affect bilateral cooperation in different areas including Iran’s nuclear program and the Syrian crisis.

Russians have always acted in collusion [with the US] over smaller countries even when Moscow was powerful than the US.

It was the first time Russia openly threatened the US, using the Iranian nuclear card. Russia does not want to be the only country at odds with the West; the pressure of sanctions against Russia will build up if Iran’s nuclear dispute is settled.

Falahatpisheh says, “By imposing sanctions against Russia this past year, the Americans tried to put the Russians in a tight corner in global political, economic and strategic equations. This, however, did not lead to Russia adopting a realistic policy on the Islamic Republic of Iran.”

Russia tries to repair its image in Iran’s eyes

Russia has no interest in a breakthrough in Iran’s nuclear talks for political, economic and strategic reasons. Russia’s envoy to the nuclear talks has come to Iran two days before the resumption of the talks, in a bid to polish Moscow’s image in the eyes of Iran.

Falahatpisheh says that Ryabkov’s trip is meant to signal this message to Tehran that Moscow attaches great importance to Iran’s nuclear case.

He says Ryabkov has comes to Iran at a time when Iranians think ties with Tehran are not strategic to the Russians. In other words, the Russians do not eye their relations with Iran as a two-way strategy; rather, they see it in a larger picture: the overall Russia-US ties.

He further says that we need to wait and see what line the Russians take in the Geneva talks. He believes that the Russians should be put to the test in practice.

Falahatpisheh also says, “There is no indication that Russia is handling its ties with Iran in keeping with the nuclear issues. The fact is that Iran and other international questions fade into the background of Russia’s interaction and confrontation with the US and the West.

“Iranians have been repeatedly the victim of the collusion between Russia and the US. That the two may be in cahoots is not an unthinkable possibility.

“Although Russia’s National Security Strategy is confrontational and names the US as a threat, the Russians have always acted in collusion [with the US] over smaller countries even when Moscow was powerful than the US.

“Iranians have been repeatedly the victim of the collusion between Russia and the US. That the two may be in cahoots is not an unthinkable possibility. Russia has yet to act in a way that could raise doubt over its relations with Iran and the West.”

How Russia acts in Geneva talks – as Falahatpisheh has put it – remains to be seen. No matter how, their performance will be a response to questions as to why  Ryabkov has visited Tehran.