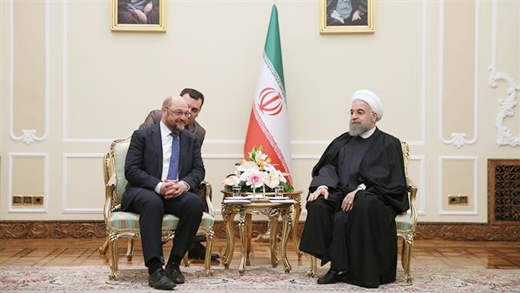 The other side should remain committed to its obligations along with the lifting of sanctions and implement the nuclear deal completely, precisely and on time, said President Rouhani.

President Rouhani has reaffirmed Tehran’s full commitment to the nuclear agreement reached between Iran and P5+1 in July, calling for on-time and complete lifting of sanctions against Iran.

“The opposite side should also remain committed to its obligations and the lifting of economic sanctions [against Iran] and implement it [a reference to the agreement] completely, precisely and on time,” Rouhani said in a meeting with visiting President of the European Parliament Martin Schulz in Tehran on Saturday.

In line with the expansion of economic and trade relations, Iran and EU member countries should also improve cultural and scientific cooperation following the removal of sanctions, he added.

The president further underlined the need for a global campaign against terrorism.

Iran, as a victim of terrorism, is fighting terrorism decisively and seriously, President Rouhani said, adding, “Today, more opportunities have been created for closer cooperation between Iran and the European Union to contribute to stability in the region.”

He said that Iran and the EU should tap into their potential “in favor of economic development of all countries.”

Schulz said JCPOA will be an unprecedented chance and a new chapter in relations between Iran and the EU.

The nuclear agreement proved that diplomacy is the best way to settle differences and serve common interests, he added.

He expressed the European Parliament’s willingness for promotion of bilateral and international cooperation with Iran.

In a meeting with the visiting president of the European Parliament on Saturday, Foreign Minister Mohammad Javad Zarif said JCPOA will lay the ground for improving Tehran’s economic cooperation with the EU.

Zarif said that Iran welcomes bolstering economic cooperation with the EU based on mutual respect and in line with basic principles accepted by the two sides’ parliaments.

Schulz, for his part, told Zarif that the European Parliament is interested in the expansion of parliamentary cooperation with Iran through adoption of new approaches.

The European Parliament welcomes economic cooperation, trade exchanges and investment in Iran in line with the framework of JCPOA, he said.

Schulz arrived in Tehran on Saturday at the head of a delegation and held talks with senior officials, including Parliament Speaker Ali Larijani.