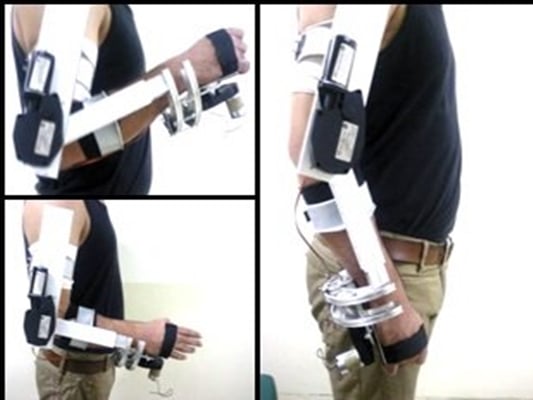 A group of Iranian researchers have optimised a wearable robot to present a new method for the empowerment of patients with spinal cord and wrist injuries as well as those who have suffered ischemic stroke.

Scientists at Sharif University of Technology say this wearable robot, equipped with a motion-detection system, allows patients to move their hands with damage to the function of their upper limb.

Esmaeil Mohammadi, a graduate of biomechanics at Sharif University of Technology, who is the initiator of this project, says they have succeeded in implementing this project with the support of the Electronic Industries Fund.

He says the robot could be used for patients who for various reasons have been unable to move their elbow and wrist joints or have a limited range of motion.

“The robot detects the course of movement after it is worn by the patient. When the patient wants to move, the robot will continue to move. It can help patients with wrist injury (fracture, inflammatory lesions, nerve damage, joint stiffness, etc.), patients with stroke and spinal cord injury, and patients with cerebral palsy,” added Mohammadi.

The designer of the robot emphasised that it will stimulate the nerves, prevent the involved muscles from becoming lazy and, over time, increase the movement range of elbows and wrists.

He also mentioned that the product will be available in both “wearable” and “desktop” models.

“This product is available for research and scientific inquiries in all universities, research centres, rehabilitation centres (occupational therapy and physiotherapy), and for exercises, especially those which increase range of motion, strength, and accelerate recovery.”

The researcher further noted that he has designed the robot in two forms: “Exo Passive and Active” for wrists and elbows, and “two-channel biofeedback” devices.

“Two-channel biofeedback is a device that distinguishes skeletal muscle from the muscles which begin to contract, and shows them to the user at high speed and precision. In addition to being small and portable, this biofeedback device will also help the therapist in the diagnosis and treatment.”

Mohammadi referred to the benefits of the product saying that centres and hospitals are looking for a device that, in addition to performing passive movements, can be portable and handle active movements of the patient so that more patients can use it.

“The patient can also take the robot to his home or workplace, if needed, and can continue his/her practice consistently.”

He argued that existing foreign devices incur a very high cost for both purchase and maintenance.

“With the production of these devices, in addition to creating jobs and preventing foreign currency from leaving the country, it would be possible to compensate for the shortage of these equipment in the rehabilitation centres and provide a suitable replacement for the imported samples.”

Mohammadi said a semi-industrial sample of this product has been produced.

Physiotherapy and rehabilitation centres, hospitals, veterans and the disabled, people with cervical spinal cord injuries, and people who have suffered strokes, accident and fracture are the main customers of this product, he added.