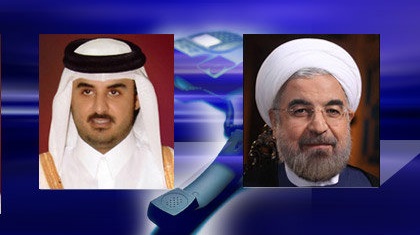 President of Iran Hassan Rouhani says security and stability in the region would be attainable only through regional cooperation.

In a telephone conversation with Emir of Qatar Sheikh Tamim bin Hamad al-Thani on Thursday, President Rouhani emphasized the necessity for the expansion of relations between Tehran and Doha given the delicate situation in the region.

“Security and stability in the region would be achievable only within the framework of regional cooperation, and we can undoubtedly bring about better conditions in the region with the promotion of cooperation,” the Iranian president said.

He also congratulated the Qatari government and nation on Eid al-Adha, and hailed the positive ties between Iran and Qatar as two age-old neighbors.

“The Islamic Republic of Iran sees no obstacle and limit to the expansion of relations and cooperation with Qatar as a friendly and brotherly country,” President Rouhani noted.

He finally expressed hope that the efforts made by the officials of the two countries in Iran-Qatar Joint Economic Commission would give a boost to economic cooperation and that the two states would be able to hold a face-to-face meeting in the near future.

For his part, Sheikh Tamim bin Hamad al-Thani congratulated the Iranian government and nation on the Muslim festival of Eid-al- Adha, calling for the enhancement of economic interaction between the two states.

Highlighting the significance that Qatar attaches to the promotion of ties with Iran, the emir expressed hope that overcoming the problems and difficulties would help the two nations make great strides in broadening their ties in all fields.

Iran and Qatar have stepped up diplomatic and economic relations in recent years, particularly after the Islamic Republic helped Qatar secure supplies when a Saudi-backed boycott was first imposed in 2017.

President Rouhani has repeatedly expressed Iran’s readiness to share its experiences in the fight against the novel coronavirus with Qatar.