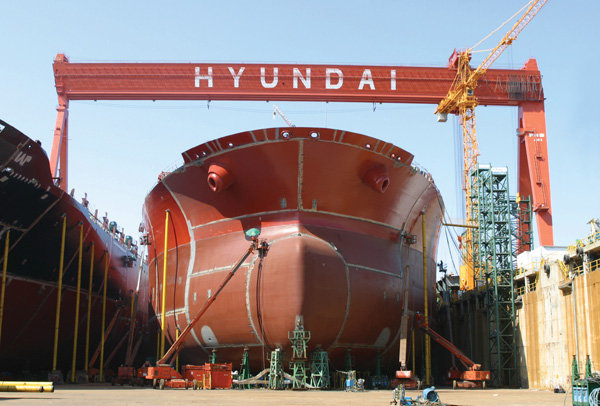 President Hassan Rouhani’s government has placed an order with South Korea to build a number of ships for Iran, but the contract has sparked strong reactions, particularly from the IRGC’s influential construction base, which says Iranian companies are capable enough to build the ships.

According to a report by IFP, Iran signed a contract with South Korean Hyundai Heavy Industries Group for building 10 ships a while ago; however, Iranian firms and experts take it as a denial of domestic potentialities.

Khatam al-Anbiya Construction Base, which belongs to the Islamic Revolution Guards Corps (IRGC), recently called on President Hassan Rouhani to annul the contract his government has signed with Hyundai, highlighting the great potentials of Iranian companies.

However, in a Farsi report, Shargh Newspaper quoted Ali-Akbar Ghonji, an advisor to managing director of Iran Ship Building Company, as saying that Iranian manufacturers are not equipped with building technologies based on the latest advancements in the sector now.

Furthermore, Ghonji strongly believes that brokering and purchase of machinery and instruments are behind the curtain of such blame games. Referring to breach of promises by Iranian manufacturers, he said Iranian companies only assemble products and we are going to place orders for ship building without the middle people, thus reviving the money frozen in Korea at the time of sanctions.

Disrespecting Domestic Capabilities Is a Treason

However, commander of Khatam al-Anbiya Construction Base has shown a harsh reaction to the issue, “The Islamic Republic of Iran Shipping Line (IRISL)’s disrespect for the domestic potentials is a treason.”

In reaction to such a contract, Brigadier General Ebadollah Abdollahi said in a press briefing, “The president should cancel the contract for construction of 10 ships with South Korea; otherwise, one can no longer trust words and slogans.”

In protest at the IRISL, he offered a series of proposals and said, “We are ready to form a consortium of such domestic companies as Sadra and Iran Shipbuilding & Offshore Industries Complex Co. (ISOICO), thus enforcing the contract, being EPCF in nature, with 85 percent of finance and 15 percent being the share of the IRISL in it for construction of 10 ships.”

Domestic Ship Builders Are Not Trusted

Such a claim had earlier been made by the ISOICO manager. Addressing a press conference, he offered a proposal: The ISOICO is ready to give any commitment to domestic shipping companies so that they will give the offer to us with the same conditions they are offering to foreigners.

Hamid Rezaiean said, “Unfortunately, domestic ship builders are not trusted. We have reached the point that we can compete with foreign shipbuilders fully and have no problem with time, price and technology. Even though the ISOICO has fulfilled all its projects over the course of the past five years, Iranian ship builders did not place orders with us.”

Commander of Khatam al-Anbiya Construction Base also said on Monday, “Today, unemployment has become a recurring headache in the country and there are immense potentialities for resolving the problem in the society. In the shipbuilding industry, we have such big companies as Sadra, which have experiences in construction of the 113,000-ton Aframax ocean-liners in 22 months.”

He added, “Koreans had eight months ago received $215 million to build ships for us but breached their commitment. Today, we have the domestic potential and there is a need to activate capacity to eradicate unemployment in the country, we can build ships inside. It is highly a matter of surprise that there are institutions and organizations signing such contracts.”

General Abdollahi said, “Khatam al-Anbiya Construction Base is active in 10 major fields in the country. For the time being, 150,000 people are directly engaged in the projects undertaken by the Base and more than 1.5 million others are either directly or indirectly involved in working. We have more than 12,000 advanced machinery and equipment.”

Why Domestic Companies Do Not Get Ship Building Orders?

Mehr News Agency has quoted the IRISL representative as saying that the potential of Iranian foundations to design and build ocean liners is not enough.

In a televised interview on Monday night, Mohammad-Ali Beigi provided justifications on orders placed with foreign companies and not using domestic potentials, and said the orders the IRISL and National Iranian Tanker Company (NITC) placed with Iranian ship builders testify the shipping companies’ support for the industry.

The orders have not, of course, been fulfilled yet, he added.

The IRISL representative added, “We had already placed orders with domestic companies for construction of two oil tankers, each valued at $30 million. The contract was to be in force in 2004. We signed it with ISOICO. They were to deliver the two ships in 24 months but after 12 years it has not been met.”

The IRISL expert added, “We placed orders with Sadra Iran Marine Industrial Company for construction of three oil tankers, each for $40 million. It was signed in 2005. After 12 years, the company has not fulfilled its promises. The NTC paid $143.7 million to the two companies. However, the ships have not been delivered. How can you expect us to offer the order for construction to the companies irrespective of all the breach of promises? They were to offer the ships in 24 months but 12 years have passed to no avail.”

He added, “The IRISL has thus far signed contracts with ISOICO, Arvandan and Sadra for ship building; however, it has received obly two ships from ISOICO. This is while the ship manufacturing institutions are not capable of building and designing ships.

According to Khabar Online’s Farsi report, First Vice-President Eshaq Jahangiri on Monday attended the gathering of Khatam al-Anbiya Construction Base directors, concurrent with anniversary of establishment of the headquarters.

Addressing the directors, Jahangiri said, “You have assumed the responsibility to fulfill big tasks of the country’s construction; you are busy with important jobs and you are the main body in charge of development and progress of the country.”

“Good infrastructure projects have been laid down for the country’s shipbuilding industry. Meanwhile, the industry should definitely start up and suitable mechanisms should be adopted for providing necessary finances. If it finds a suitable mechanism for financing shipbuilding, Iran will definitely turn into a good shipbuilder worldwide,” the official said.

“Conclusion of the ship purchase contract with South Korea dates back to 2008 and is nothing new. When the contract was signed, more than 25 percent of the sum of the contract was paid to the Korean side, but in the coming phases and due to being targeted by the US-led sanctions, it was not possible to transfer the money.”

“Having received the initial 25 percent of the value of the contract, the Korean party started building the ships, but due to Iran’s failure to fully pay the money, it stopped work and lodged complaints against Iran at a court. After the Joint Comprehensive Plan of Action (nuclear deal between Iran and world powers), talks were held with the Koreans and it is to enforce the former contract at a value 25 percent less than the original, which will be endured on their part,” Jahangiri noted.