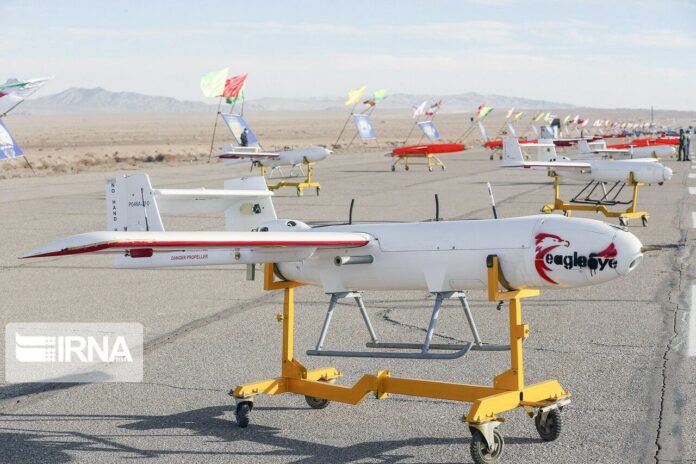 A senior Iranian Army general claims the country has managed to increase the range of its homegrown suicide drones to 4,000 kilometres.

“Thanks to the efforts of the Iranian Army personnel, the non-stop flight range of the Army’s suicide drones has been upgraded to 2,000 kilometres, and with certain measures up to 4,000 kilometres,” said Army Deputy Commander for Operations Rear Admiral Mahmoud Mousavi, who is also a spokesman for the Army’s large-scale drone drills underway in Semnan.

He made the remarks on the second day of the massive drills, during which the country’s long-range missiles flew 1,400 kilometres from Makran coasts in southern Iran and successfully destroyed their targets in the war games area.

The Karrar-class drone successfully intercepted and destroyed mock hostile targets by firing an air-to-air Azarakhsh (Thunderbolt) missile, with a low radar cross-section at a high altitude.

During the maneuver, the Karrar UAV used a payload of machine gun ammunition to fire rounds at mock aerial targets. The drone also struck targets on the ground, including enemy fortifications, using 500-pound MK 82 bombs.

“At this stage of the exercise, a number of Army drones successfully carried out reconnaissance operations against fixed and mobile targets along land borders,” he added.

“Today, the Army of the Islamic Republic of Iran is able to strongly respond to any enemy aggression and target positions within a range of 2,000 kilometres using a variety of long-range combat drones,” according to the commander.

Hundreds of drones belonging to the Army’s Ground, Navy and Air Defence Forces are practicing combat missions in the large-scale drills.