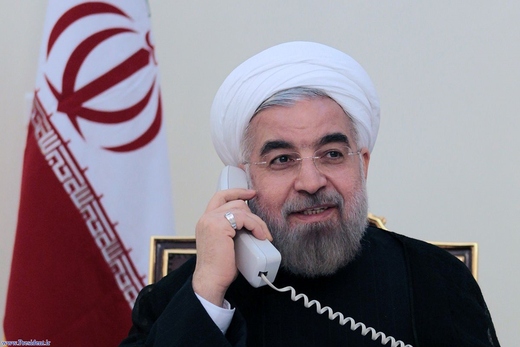 Iranian President Hassan Rouhani has urged Azerbaijan and Armenia to exercise restraint in dealing with the current conflict in Nagorno-Karabakh, saying Tehran wants peace and stability restored to the region.

In separate phone calls on Wednesday, Rouhani called on Azerbaijani President Ilham Aliyev and Armenian President Serzh Sargsyan to do all they can to ensure the implementation of a ceasefire currently on hold in Nagorno-Karabakh.

“The Islamic Republic of Iran is very upset about the killing of civilians and troops of the two friendly, neighboring countries,” Rouhani said, adding that Iran is ready to use all its capacities for the peaceful settlement of disputes between the two sides through political dialogue.

The Iranian president warned that a prolonged conflict over Karabakh would harm the interests of Azerbaijan and Armenia more than any other country.

“The region is currently grappling with massive crises and terrorists and their sponsors always try to spread the crisis to the entire region,” Rouahni said, adding that any extra tension and conflict could pave the way for the ill-wishers to realize their objectives.

Leaders of Azerbaijan and Armenia, for their parts, informed Rouhani of the latest developments in the conflict over Karabakh while they hailed Iran’s efforts on mediating the dispute between the two countries.

Armenian and Azerbaijani forces said earlier on Wednesday that they were observing a ceasefire recently agreed between the two sides in Nagorno-Karabakh, a landlocked territory located in Azerbaijan but claimed by local ethnic Armenian militia.

At least 75 people have reportedly been killed since April 1, when fighting broke out over the region.