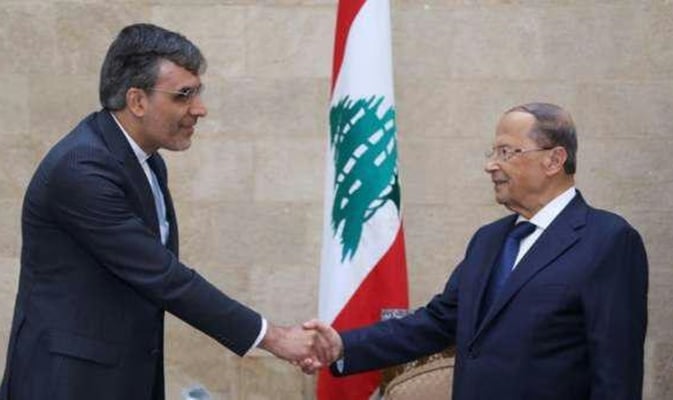 Hossein Jaberi Ansari, a senior assistant to Iran’s foreign minister, has delivered a message from President Hassan Rouhani to his Lebanese counterpart Michel Aoun in Beirut.

In a Monday meeting, the Iranian diplomat delivered President Hassan Rouhani’s message to Aoun as part of his tour of regional countries as the special envoy of the Iranian president.

He also discussed the latest developments regarding the Iran nuclear deal, the US’ unilateral move to pull out of the deal and the current negotiations underway between Iran and the remaining sides of the nuclear accord over its future.

“Iran attaches significant importance to expansion of ties and further cooperation with Lebanon and other regional states in all fields as well as finding a political solution to the regional crises,” he said.

The Lebanese president, for his part, said his country regards Israel’s possession of nuclear weapons as unacceptable, stressing that denuclearization of the whole region is among Lebanon’s principled policies.

He also referred to the negative fallouts of the US withdrawal from the Iran nuclear deal on the regional stability and peace and said Lebanon supports the efforts by the Islamic Republic of Iran and the remaining sides of the JCPOA to save the multinational deal and Iran’s right to fully enjoy its political and economic benefits under the accord.

Preserving JCPOA a Success in Countering US’ Unilateralism

During the talks, the Iranian diplomat said the Islamic Republic of Iran believes the success of its joint efforts with signatories to the JCPOA in order to preserve this multilateral international agreement and see Iran fully reap the benefits of the deal is a success for all countries in the region and in the world in countering the United States’ policy of unilateralism.

Jaberi Ansari further presented a report on Iran’s efforts within the framework of Astana talks to settle the political crisis in Syria. He also stressed that while major gains have been achieved in fighting terrorism, it is necessary to pay attention to the political and humanitarian dimensions of the Syria crisis.

He also said Iran and the other parties involved in the Astana talks will continue their constructive cooperation in the current stage to facilitate the process for the Syrian Constitutional Committee to begin work and speed up the return of Syrian refugees to their homeland.

Jaberi Ansari also touched upon the meetings he had with the Lebanese president and parliament speaker, and said he conveyed a message from Iranian President Hassan Rouhani to his Lebanese counterpart Michel Aoun.

Bassil, in turn, referred to the pressures put on the regional countries, including Iran and Lebanon, saying the pressures are aimed at “securing domination over us.”

The top Lebanese diplomat touched upon Lebanon’s victories over Israel in 2000 and 2006 as well as the triumph over Takfiri terrorism which has benefitted Tel Aviv the most. Under the current circumstances, he said, the regional countries should stand by one another and against animosities.

Jaberi Ansari earlier visited Syria and Tunisia to convey Rouhani’s messages for their leaders. In recent weeks, President Rouhani’s special envoys have travelled to different countries from Latin America to regional countries and conveyed his messages on the Iran nuclear deal to his opposite numbers and other heads of state.