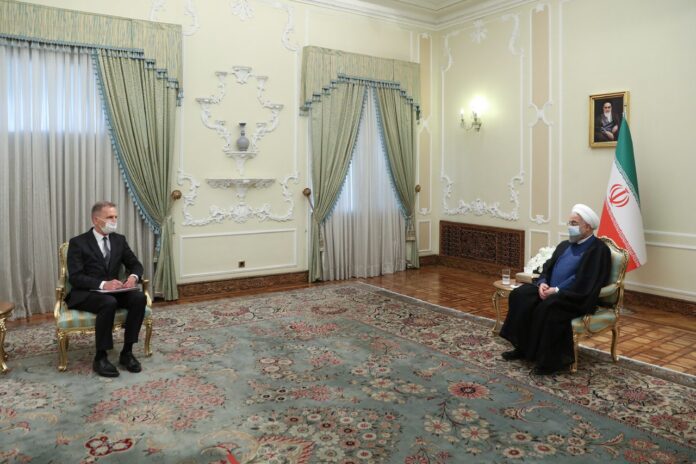 Iranian President Hassan Rouhani has criticized the three European parties to the 2015 nuclear deal for their failure to stand against Washington’s attempts to block Tehran’s request for an emergency International Monetary Fund loan to fight the coronavirus.

In a meeting with Germany’s new ambassador to Tehran on Tuesday, President Rouhani said Iran had expectations that the EU3 -Germany, France and the UK- would withstand the US pressures and help Iran receive a $5 billion loan from the International Monetary Fund to fulfill its medical, health and pharmaceutical needs amid the outbreak of COVID-19.

Although the IMF’s Executive Board had agreed to Iran’s request for the loan, the US obstructed its payment with adverse interference, President Rouhani deplored.

Hailing Germany’s good stances against the US’ unilateralism in the world, the president said the three European parties to the JCPOA have acted “logically” against the US’ illegal and incorrect attempts to re-impose the cruel sanctions against the Iranian nation and have supported the UNSC Resolution 2231.

Highlighting the age-old and friendly relations between Tehran and Berlin, President Rouhani urged that the economic and trade relations should grow irrespective of the US’ illegal sanctions.

Stressing the need to enhance cooperation between Germany and Iran considering the current tough conditions, Motzel said he would do his utmost to that end during his tenure in Tehran.