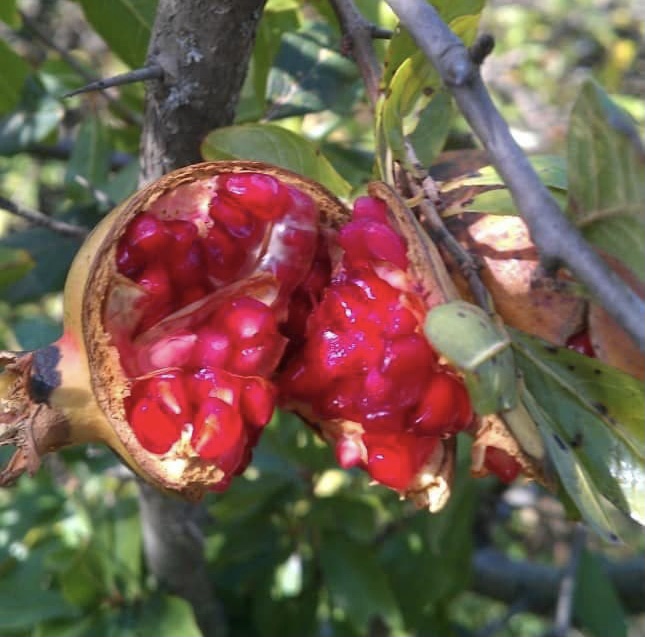 The harvest of wild pomegranate in Miankaleh Wildlife Sanctuary in northern Iran has started on October 12 and will continue for two weeks.

The program is being carried out under the supervision of Behshahr Environmental Protection Department.

Expanding in an area of 68,800 hectares, Miankaleh is one of the most important reservoirs for plant and animal genes in the biosphere and consists of various ecosystems with plants such as raspberries, flowers and pomegranates.

Miankaleh’s pomegranates are organic and free of fertilizer and poison. They are also natural. The pomegranates’ customers come from the cities of Amol, Babol, Ghaemshahr and Sari in the northern Province of Mazandaran and the provinces of Golestan, North Khorasan and Semnan.

End of greenness, story of picking and the beginning of cooking pomegranate

After sour pomegranates are picked from trees in Miankaleh, a new path begins. Pomegranate seeds are collected in large containers and after rinsing with the same amount of water in large pots, they are boiled for about 5 hours.

Then they beat the cooked pomegranate mantle with a wooden tool called “ghelyan” to separate the mantle from the pomegranate kernel.

Then, the pomegranate juice is stirred continuously for 7 to 10 hours on low heat to obtain a semi-solid mixture. This is pomegranate paste.

Native people of the Miankaleh Peninsula in Behshahr, suburban dwellers and non-governmental organizations have established 5 cooperatives in the region.

UNESCO is defined for biosphere reserves. Thus, seasonal jobs have been created for people of local communities through the principled harvesting of pomegranates from the Miankale Biosphere Reserve, which is in line with the Man and Biosphere (MAB) program defined by UNESCO for biosphere reserves. Arian Aboutalebi, secretary of the board of directors of Behesht Miankaleh Ecological Cooperative and an environmental activist, says indigenous people and suburban dwellers have received the necessary training for a sound and sustainable harvest from Miankaleh pomegranate gardens.

“The great achievement of this project is to create a sense of friendship with nature and to preserve the pristine and unique nature of this reserve as much as possible, and the proceeds will be donated to the environment as agreed and will be spent on improving the region,” he adds.