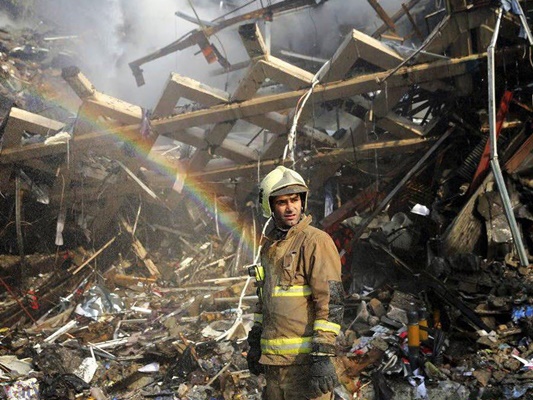 Following the tragic collapse of Plasco Building, many Iranian media outlets have sharply criticized the presence of Iranian artists and athletes in Tehran’s City Council - thanks to public votes - while they do not possess sufficient expertise and efficiency for managing urban affairs.

Iran’s oldest high-rise in downtown Tehran collapsed on Thursday (January 19) morning following a huge fire in the building, leaving many firefighters buried under the rubble, all of them are presumed dead.

Among the harshest criticisms levelled at the incompetency of City councillors is an article by Asr-e Iran news website, which questions people on voting for such figures, inviting them to take greater care in future elections:

While the Municipality of Tehran is responsible for managing urban affairs, Tehran City Council is in charge of overseeing the operations, performances and decisions of this urban administrative division, on behalf of the people.

The Plasco Building’s collapse was an outcome of a collection of shortcomings and drawbacks in all sections of the Iranian society and government. Even a closer look at the incident fails to determine who is to fully blame for the sad event.

Nevertheless, above all others, Tehran Municipality is apparently more involved in the incident and its consequences, due to its direct organizational role in staving off such disasters.

As per law, Tehran Municipality should have suspended activities in Plasco high-rise as a high-risk structure.

Do not mistake this piece of writing for a political spin, at a time when dozens of our beloved compatriots are buried under massive piles of iron girder, cement and flame. This is to remind that each one of us who has cast his/her ballot in favour of an inefficient candidate in the previous City Council elections is responsible for this tragedy.

It is highly unlikely that we would hire a gardener, babysitter or a manager [for our company], without first asking questions about their expertise and making sure about their eligibility for the job: Does he know gardening? Is he knowledgeable or capable enough to take care of my baby or company?

Disaster occurs when we appoint the gardener as the manager of the company, expect the management expert to nurse our children, and make the babysitter prune our trees.

This is the disaster that has happened to Tehran’s City Council. We are all to blame for it.

Many of us, whether conservative, reformist or none of them, have voted for inexperienced people who don’t have enough knowledge in urban affairs.

Having a great passion for someone’s voice, appearance or political stance is not a rational reason for selecting incompetent people for a sensitive position.

Other criteria such as he can lift multi-hundred weights, he is a very good wrestler or a master of martial arts, are also non-conducive to a wise choice when selecting an urban affairs expert. Neither can a left kick, nor a right hook knock a single urban problem down. No one has ever won a battle against urban challenges through martial techniques.

Certain knots are only untied by experience and expertise, and not powerful muscles or a flexible body.

The upcoming City Council elections in May would be a golden opportunity to vote for urban management experts, whether they are conservative or reformist; otherwise, we would betray our city as well as its citizens or, perhaps, be among the candidates to burn in future Plasco incidents.

Iran’s political parties are also required to refrain from misleading people and betraying them by including famous names in their lists, whose fame is their only significant feature.