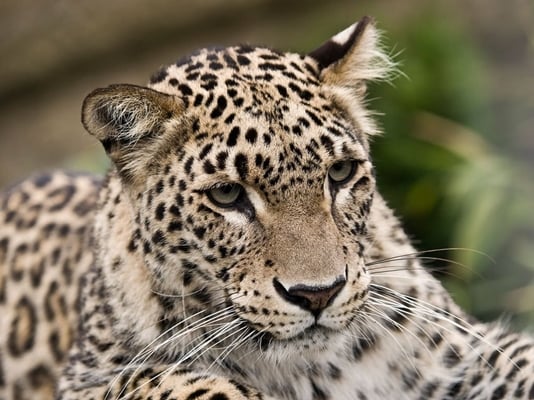 An old male Persian leopard named Borzou has moved 20 kilometers from the Iranian border to enter Turkmenistan. This is the first time the leopard’s movement between two regional countries is being recorded.

According to Iran Environment and Wildlife Watch, the male leopard left the Tandooreh National Park in Iran on September 26 and crossed a large number of villages across the main and secondary roads to reach the Iranian-Turkmen border.

In 23 days, Borzou sat at the heights overlooking the countryside, and as the sky darkened, he came down the highlands and roamed around the villages and agricultural lands, hunting dogs and a wild sheep.

The migration of Borzou, who was one of the four Persian leopards equipped with a tracker collar, indicates the importance of protecting the natural arenas on the borderline.

Mohammad Sadeq Farhadinia, who is responsible for “The Persian Leopard: Ecology and Conservation in Northeastern Iran” project, says during these 10 nights, Borzou lived in the villages, vicinity of farms and human habitats.

“Interestingly, there was no indication of the presence of a leopard or an attack on domestic livestock and, basically, nobody noticed him.”

During the 10 days after he left the park, Borzou had to hunt in order to survive. However, given that wild herbivores like goats, rams and ewes are not usually seen in these areas, the leopard has probably fed on a dog or boar.

Borzou’s migration highlights the importance of protecting the natural arenas on the frontiers, proving that joint environmental cooperation between Iran and neighbouring countries can lead to genetic exchange and the achievement of sustainable wildlife populations, especially those of large carnivores that are moving in these areas.

In the course of “The Persian Leopard: Ecology and Conservation in Northeastern Iran” project, four male Persian leopards called “Bardia”, “Borna”, “Borzou” and “Kaveh” have been captured and equipped with a satellite tracker collar.

According to the program, the collars will automatically be removed after a year, and so far two collars belonging to Borna and Bardia have been removed right after 365 days.