Over 100 Killed in Cuba Plane Crash 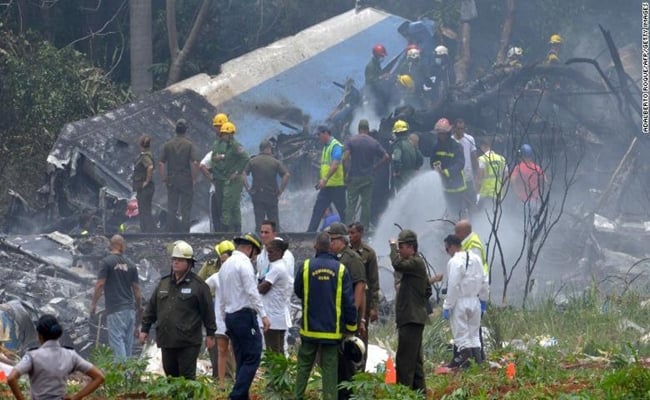 More than 100 people have lost their lives on Friday after a Cubana de Aviacion Boeing 737-200 crashed on take-off from Havana's Jose Marti International Airport.

Cuba’s state-run media report that three female passengers are in critical condition after surviving the crash into thick vegetation just miles from the runway.

The state-run newspaper Granma earlier said one of the three survivors had died. Shortly afterward, Granma issued a correction, saying that all three women are alive.

Flight DMJ 0972 was headed to the eastern Cuban city of Holguin when it plummeted into in an agricultural area in the Santiago de Las Vegas neighbourhood at 12:08 p.m., according to Granma. Vice Minister of Transportation Eduardo Rodríguez Dávila said there were 105 passengers on board, including one infant. Five passengers were foreigners and 100 were Cuban, he said.

The nearly 40-year-old Boeing 737-200 was owned by the Mexican airline Aerolíneas Damojh and leased to Cubana de Aviacion, the Civil Aviation Authority said in a statement. The charter flight “suffered a failure” and crashed about six miles from the airport.

Search and rescue personnel descended on the area — with some residents helping — as fire-fighters tried to extinguish the flames, according to photos and video from the scene.

Cuban President Miguel Diaz-Canel was at the scene of the accident, the newspaper reported.

Diaz-Canel later offered his condolences to the victims’ families and told reporters the cause of the crash was under investigation.

Cuban State TV announced two days of mourning, during which flags will fly at half-staff.

Former Cuban President Raul Castro, recovering from recent hernia surgery, is aware of the crash and is staying informed about the situation, the government said.

Boeing issued a statement of condolence and said, “A Boeing technical team stands ready to assist as permitted under US law and at the direction of the US National Transportation Safety Board and Cuban authorities.”

Holguin is more than 700 km (about 435 miles) east of the Cuban capital. Cuban state media originally reported the flight was bound for Guyana.