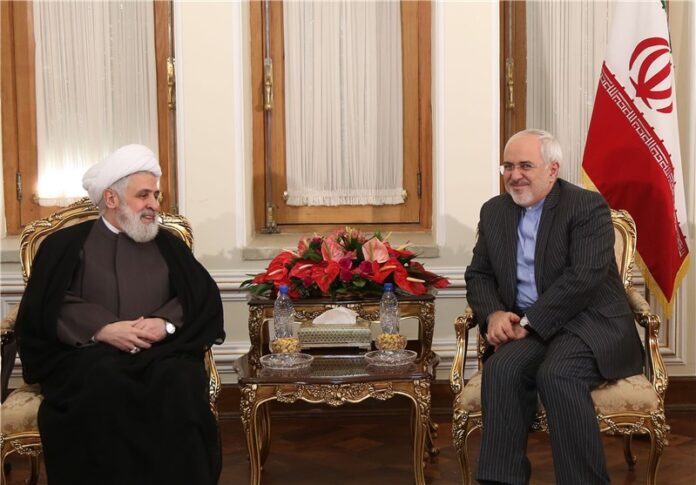 Iran’s top diplomat also described Hezbollah’s approaches, which involve boosting Lebanese people’s unity, as being in the interest of everyone.

Iran’s Foreign Minister Mohammad Javad Zarif highlighted the role of Lebanese Hezbollah Resistance Movement in regional developments, saying that Muslim states are proud of Hezbollah’s achievements in the face of plots hatched by the Zionist regime of Israel.

“We are constantly pleased with the vigilance of Lebanon’s Islamic Resistance regarding different events,” Zarif said Sunday in a meeting in Tehran with Sheikh Naim Qassem, Hezbollah’s second-in-command.

Iran’s top diplomat also described Hezbollah’s approaches, which involve boosting Lebanese people’s unity, as being in the interest of everyone.

In the meeting, Sheikh Qassem, who is in Tehran to attend the 29th International Islamic Unity Conference, appreciated the Islamic Republic’s stances in support of the people of Lebanon.

He also expressed hoped that the scholars, thinkers and politicians attending the conference could come up with solutions for Muslim world issues.

Hundreds of clerics, intellectuals and academics from some 70 countries are taking part in the conference in Tehran to discuss the “present Islamic world crises.”

Organized by the World Forum for Proximity of Islamic Schools of Thought, the gathering is to discuss ways to promote unity and solidarity in the Islamic world and bring closer views of Muslim clerics and scholars’ on diverse religious issues.

The event will also focus on problems that have beset the Islamic world, particularly the threat posed by the Takfiri thoughts and sectarianism.

Participants also plan to discuss the issue of Palestine, propose solutions to settle its problems and adopt a common stance on the issue.