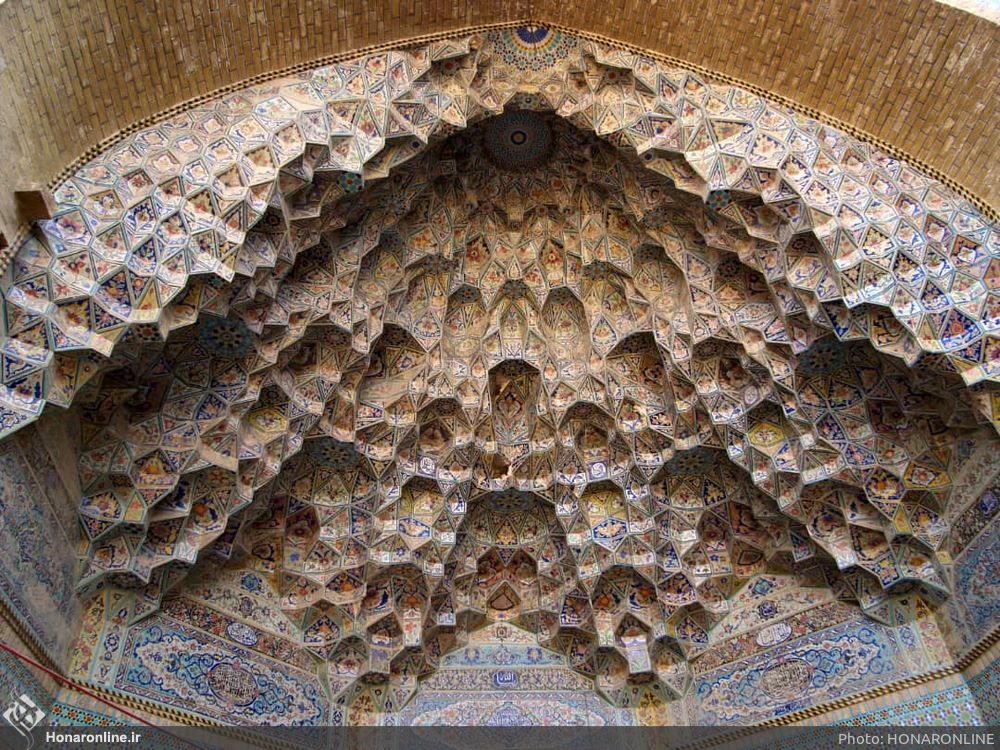 Muqarnas is a kind of ornamented work in Iranian architecture and has contributed to the evolution of some forms of art.

Muqarnas is a form of ornamented vaulting applied to the underside of domes or semi-domes above porches, entrance gates, underside of minarets, top of porches of mosques, top of altars inside mosques and other structures. Muqarnas ornaments are made with bricks, plater, tiles and wood or metal.

Muqarnas ornaments are very similar to beehives. They are built in the form of layers built on top of one another in order to decorate buildings, and sometimes gradually change in appearance from one geometric shape to another.

By looking at natural icicles and limestone cones inside caves in Iran, one finds out that the first Muqarnas artists were inspired by the same stalactites and stalagmites and built similar shapes on the inside and outside of buildings using bricks, plaster or cement.

Muqarnas ornaments are usually applied to concave surfaces underside ceilings, but could also be applied to the top of walls, ceilings, corners of gates, etc.

Muqarnas also influenced and led to the evolution of other ornamental arts and handicrafts such carpet weaving, tilework, the stucco art, etc.

Many an exquisite Muqarnas artwork on portals as well as inside domes, prayer halls and altars led to the ever-growing evolution of the tiling art and wood carving, which was applied to wooden pillars inside mosques, etc.

Unrivalled samples of such woodcarving can be seen in mosques dating back to the Safavid era.

Among the most exquisite brick and tile Muqarnas artworks on Iranian monuments are the ones at Aali Qapu Palace in Isfahan, Blue Mosque in Tabriz, Shah Mosque in Isfahan, the Great Mosque of Yazd, Chehel Sotoun Garden in Isfahan, Vakil Mosque in Shiraz and Sepahsalar Mosque in Tehran.

The following are images of some Muqarnas artworks in Iranian architecture courtesy of Iran’s Honar Online news agency.