A look at Iranian newspaper front pages on Oct. 28

Snapshots and remarks of President Rouhani about the possibility of a nuclear deal between Iran and P5+1 in meetings with the new ambassadors of four European countries appeared on the front pages of most Iranian dailies on Tuesday. Good news about a drop in inflation rate also generated headlines. Speculations about whether or not the president’s proposed minister of science wins a vote of confidence in parliament were also pretty much in the news.

Abrar: “We have yet to figure out what kind of principlism former President Ahmadinejad practices!” said Parliament Vice-Speaker Mohammad Reza Bahonar.

Abrar: “An Iranian-American woman has been nominated as US ambassador to Sweden; Azita Rajizan, who was a fundraiser during Obama’s reelection campaign in 2012, needs the approval of Senate before taking charge of the US mission in Stockholm.” 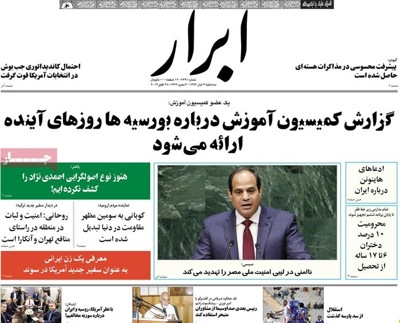 Abrar-e Eghtesadi: “Iran’s Income Distribution Pyramid reveals that 7 million people are below the poverty line, suffering from grinding poverty with their food security at stake, whereas 6 million individuals are filthy rich, leading life similar to their American counterparts.” 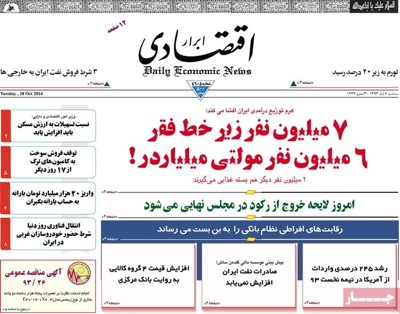 Afkar: Some235 individuals, mostly students, have been hospitalized for poisoning in Zahedan. One-hundred-fifty of the patients who inhaled poisonous fumes have been discharged. Environmental health experts are investigating the incident. 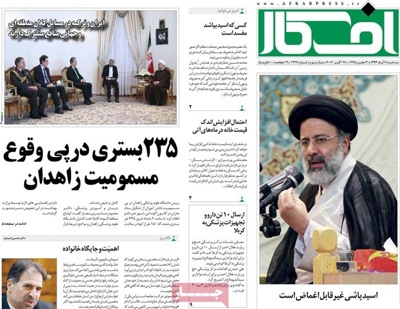 Aftab-e Yazd: “One hundred minutes of anxiety and panic; Flight 550 of Aseman Airlines had a close shave. The Yerevan-bound Boeing 727 with 124 passengers and crew on board was forced to have an emergency landing at Tehran’s Mehrabad Airport 100 minutes into the flight in the early afternoon of October 27.” Arman-e Emrooz: “Ten suspects have been taken into custody in connection with recent acid attacks.” 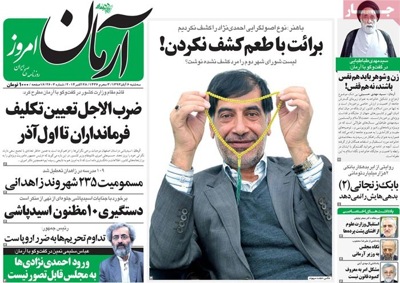 Asia: “Iran has invited US automakers to take part in a second Iranian Auto Industry International Conference (IAIIC). Among other automotive giants, Mercedes, Volkswagen and Fiat have so far voiced readiness to attend.”

Asia: “Export and import permits will be granted with ease; with agents at ten fully-authorized customs offices across the country, hurdles will be cleared.” 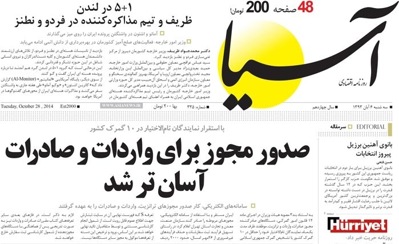 Asrar: “There has been tangible progress in expert-level talks between Iran and P5+1,” said an Iranian official.

Asrar: “A nuclear deal between Iran and P5+1 could be struck before the end of next month,” predicted President Rouhani. 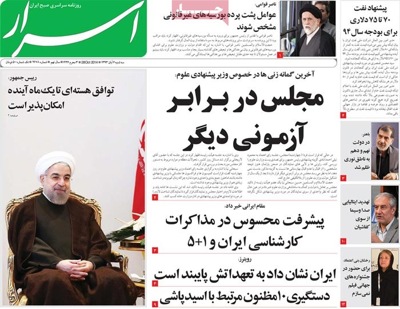 Ebtekar: “President Rouhani’s nominee to lead the Ministry of Science, Research and Technologyis coming under heavier fire as a vote of confidence by MPs approaches.” 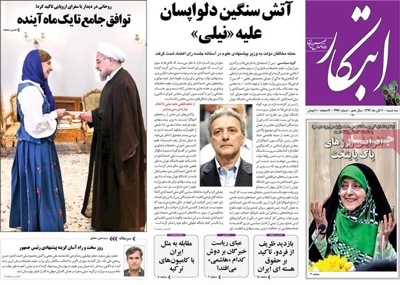 Emtiaz: “Ten percent of [Iranian] teenage girls do not have access to education.” Etemad: “Ayatollah Hashemi has not told anyone whether or not he will field his candidacy for chairmanship of the Assembly of Experts [vacated after the passing of Ayatollah Mahdavi Kani],” said an official at the Public Relations Office of the State Expediency Council. Earlier, Ahmad Khatami, a principlist cleric, claimed that he had heard that Hashemi Rafsanjani was not going to run for the top job.” 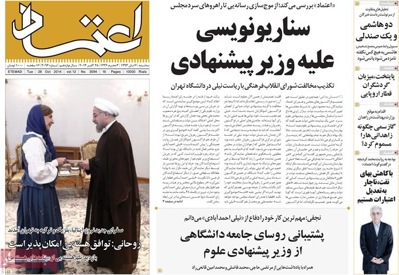 Ettela’at: In a meeting with the new Italian, Belgian, Norwegian, and Turkish ambassadors to Iran, President Rouhani underlined, “Continued sanctions will harm the interests of all sides, in particular the European Union.”

Ettela’at: “Dr. Mohammad Reza Omidkhah, an Iranian researcher and professor at the Department of Chemical Engineering at Tarbiat Modares University, has been recognized as a top international researcher.” 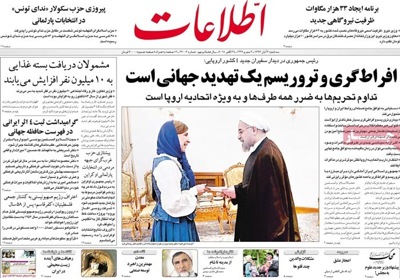 Hambastegi: “We should make the most of the potential of social networks in our favor,” said Minister of Culture and Islamic Guidance Ali Jannati.

Hamshahri: “The production sector did not receive any share of the revenues raised by the Targeted Subsidies Plan between March 21 and September 22, 2014.” 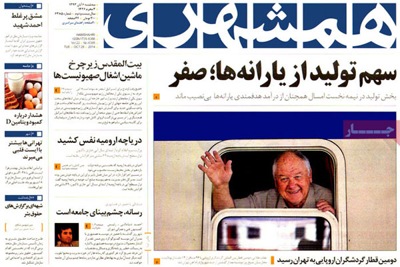 Iran: “The knot over the rights to broadcast Premier League matches between national TV and Football Federation officials has yet to be untied.” 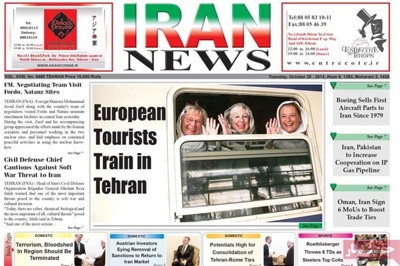 Javan: “A plot to establish an ISIL Emirate in northern Lebanon has been foiled; ISIL terrorists suffered a heavy blow in Tripoli. Secretary General of Hezbollah Seyyed Hassan Nasrallah warned about the large-scale plot by terrorists in Tripoli.” 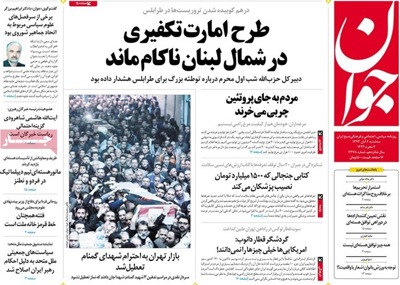 Jamejam: “An Arab-Zionist lobby against nuclear talks; hawks at Congress are sparking off a crisis.” 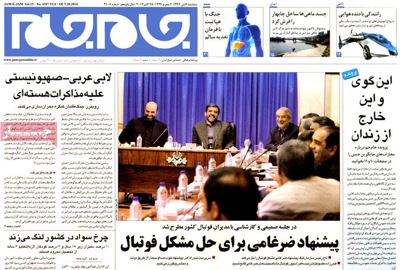 Jomhouri Islami: “Health costs will see another fall as of November 6,” vowed the deputy health minister.

Jomhouri Islami: “Major victories of the Iraqi army in the battle against ISIL.” 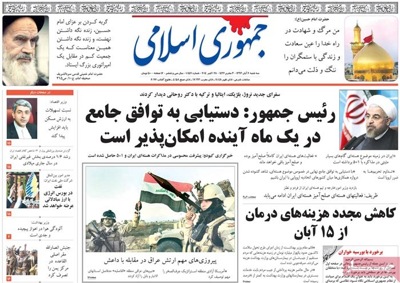 Kaenat: “Thirty people have been taken into custody in connection with the case involving fake military service exemption cards,” saidthe head of Judicial Organization of the Armed Forces.

Kaenat has quoted the director of the Environment Protection Organization as saying that the amount of benzene in the air has dropped sharply. 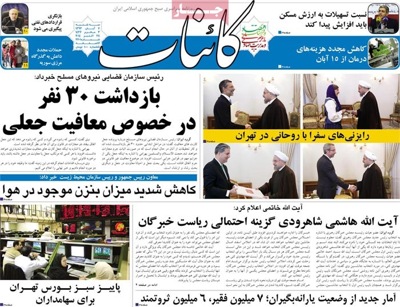 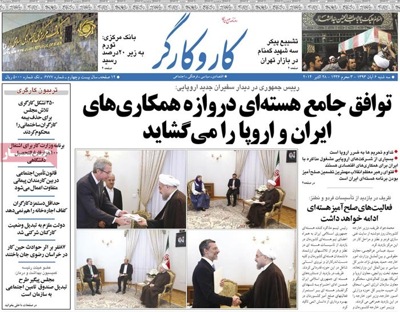 Kayhan: “Liberation of Jurf al-Sakhar [southwest of Baghdad] during Ashura Operation has turned heads globally.” Iranian general Ghasem Soleimani is said to have played a key role in the operation. 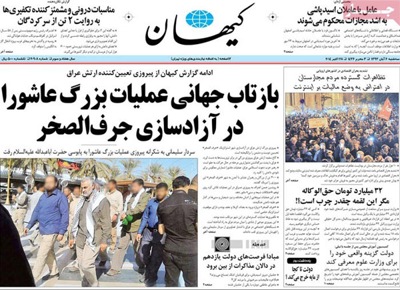 Qods: “Policies of United Nations Population Fund (UNFPA) in Iran have been modified in keeping with the guidelines issued by the Supreme Leader.” 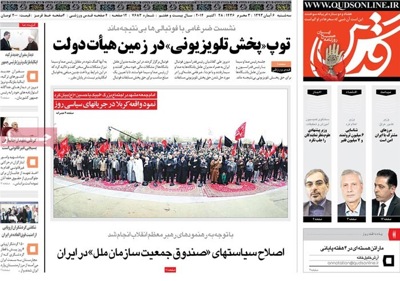 Roozan: “Iranian expatriate investors have taken President Rouhani up on his offer; Capital of Iranian expats living in the UAE is en route to Arvand Free Zone.” 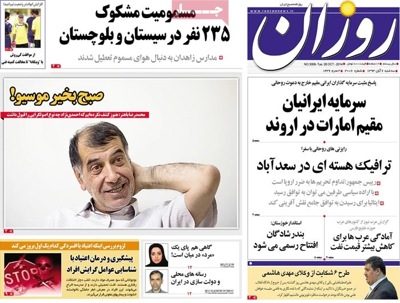 Sharq: “The suspects already arrested were not behind recent acid attacks,” said the provincial governor of Isfahan.

Sharq: “After two individuals filed complaints about the harmful effects of satellite-signal-jamming equipment, Tehran’s Prosecutorial Office stepped in to investigate the case.” 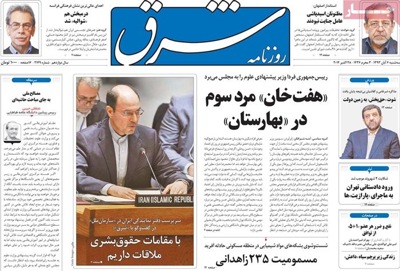 SMT: The director general of the International Affairs Department at the National Iranian Oil Company says experts have suggested that next year’s budget be drafted based on oil prices of between $70 and $75 per barrel. 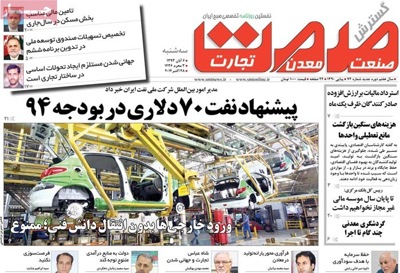