A look at Iranian newspaper front pages on Oct. 25

IFP has taken a look at the front pages of Iranian dailies on Saturday and picked headlines from 24 of them.

News about the funeral procession of Ayatollah Mohammad Reza Mahdavi Kani, who passed away in Tehran on Tuesday October 21 after he went into a coma on June 4 due to a major heart attack, appeared on the front pages of most Iranian dailies on Saturday. Ayatollah Mahdavi Kani, who presided over the Assembly of Experts, was laid to rest in the Shah Abdol Azim Shrine in Rey, a town on the southern edge of the capital. The stellar performance of Iranian athletes in the Asian Para Games who finished fourth in the overall standings was also among the top stories of the day. Another story which drew a lot of attention was a final report released by the government about the controversial scholarships granted by the previous government to individuals who did not meet the required standards.

Abrar: “Mortar fire is exchanged along the border of Iran and Pakistan.” 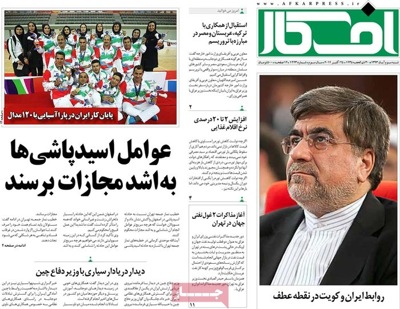 Arman-e Emrooz: “Elimination of political parties, and [concepts such as] thinking is impossible,” said President Rouhani. 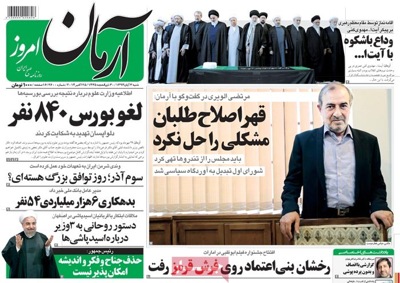 Asia: “Iran’s cooperation in Qatar World Cup 2022. Based on negotiations between Iran’s ministers of trade and economy with their Qatari counterpart, Iranian firms and contractors in different fields will be welcome to help implement some projects in Qatar.” 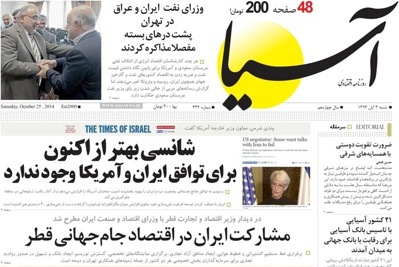 Asr-e Rasaneh: “Plans are being devised to raise the country’s oil storage capacity by 32 million barrels.” 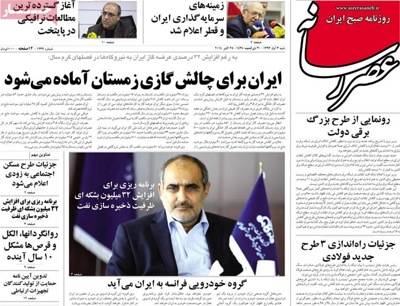 Bani Film: “Dubai Sport, a UAE-based TV station, has offered over $80 million to get the rights to broadcast Iranian [Premier League] football matches.” 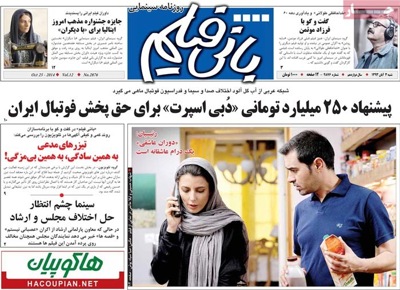 Ebtekar: “Mohammad-Taghi Mesbah-Yazdi, a member of the Assembly of Experts, was conspicuous by his absence in the funeral procession of the late Mohammad Reza Mahdavi Kani.” 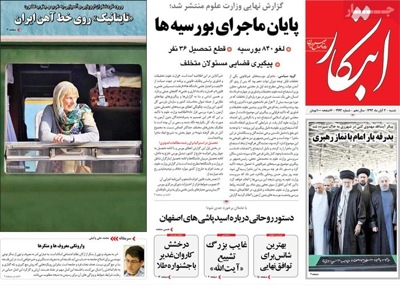 Eghtesad-e Pooya: “Iran’s mining sector has its sights on attracting foreign investment to the tune of $3 billion each year.” 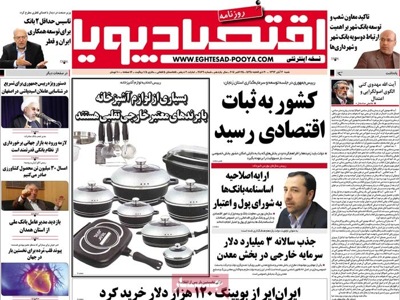 Etemad: “A final report has been released on investigations into whether or not those granted scholarships during the second term of Ahmadinejad met the required standards. Based on the report, as many as 3,772 individuals were given scholarships without passing the required examination; the scholarships of 840 university students have been rescinded and they will have to pay their tuition fees if they are willing to carry on their education; another 36 have been banned from education and will have to pay back all the fees spent on their education, grants of 23 who used the benefits dedicated to the families of those who lost limbs or lives to the war were cut off. A list of instructors – 448 in total – has been sent to their universities for a final decision in their case. A final decision in the case of 729 students has been put on hold due to its potential political ramifications.”

Etemad: “Tehran in business with Boeing; for the first time [since the Islamic revolution]; Iran has bought plane spare parts from Boeing.”

Etemad: “Rouhani has a great deal of patience; some are outraged by the accomplishments of the government,” former Tehran Mayor Gholamhossein Karbaschi said. 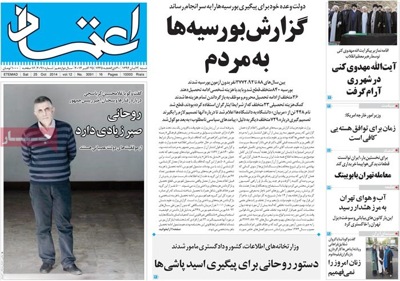 Ettela’at: “A cloud-seeding initiative will be implemented in Tehran.”

Ettela’at: “President Rouhani has urged the speedy identification [and arrest] of those behind recent acid attacks in Isfahan.” 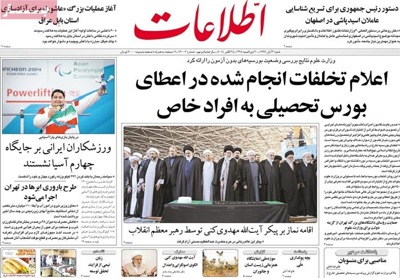 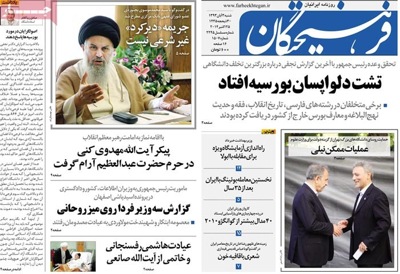 Iran: “Visiting Minister of Culture and Islamic Guidance Ali Jannati has met with the Emir of Kuwait.” 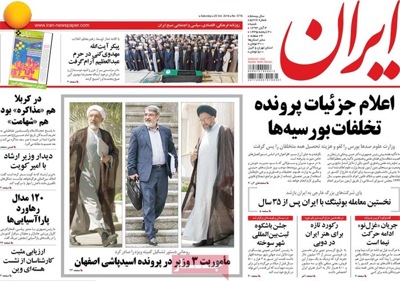 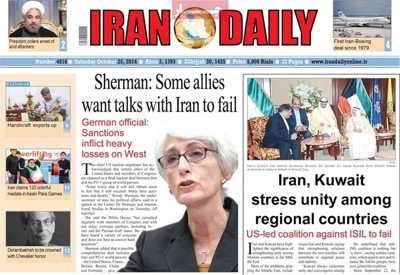 Jahan-e Eghtesad: “The number of checks bounced has seen a 43-percent rise.” 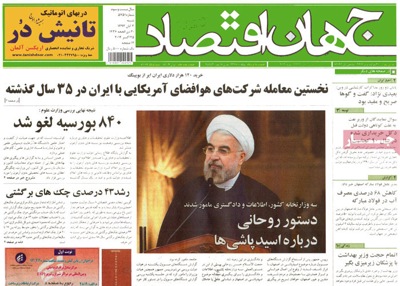 Javan: “Tatbir [Striking oneself with a machete which causes blood to flow as a practice in remembrance of Imam Hossein] either performed in public or privately is forbidden,” read a religious edict issued by the Supreme Leader ahead of the mourning ceremonies in Muharram. 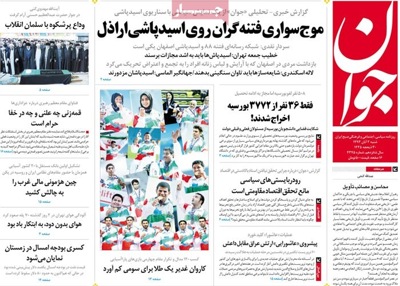 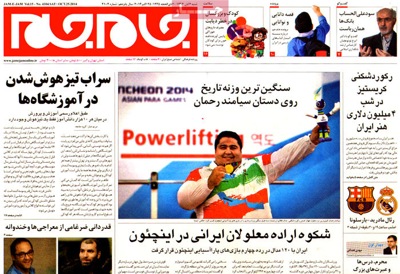 Jomhouri Islami: “An aid package to help those suffering from refractory diseases will be implemented soon; although co-payment by patients in state-run hospitals is about seven percent, many patients still cannot afford it,” said the health minister.

Jomhouri Islami: “IS has suffered its heaviest defeat in Iraq.” 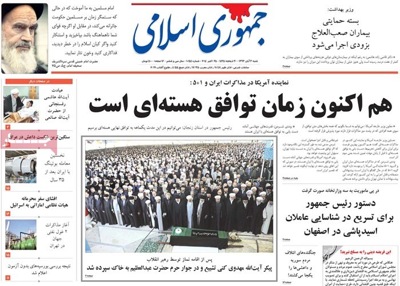 Kayhan: “A cross-dresser who was trying to incite violence in rallies against recent acid attacks in Isfahan has been arrested.” 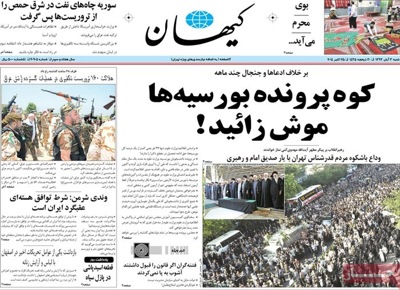 Payam-e Zaman: “Ebola can possibly find its way to the country; an equipped laboratory has been set up to contain the likely outbreak of the disease,” said the health minister. 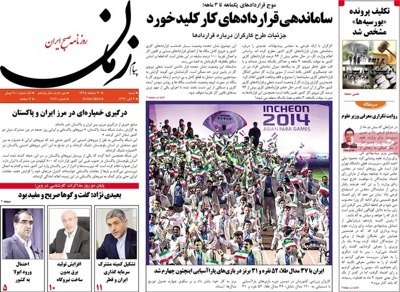 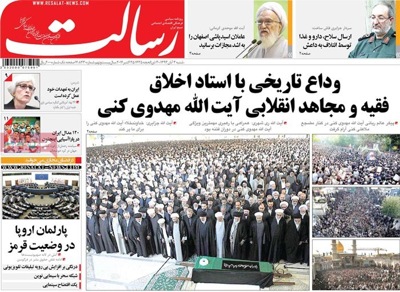 Shahrvand: “In securing development, recruiting new volunteers is the objective of Iran’s Red Crescent Society,” said the head of the society. 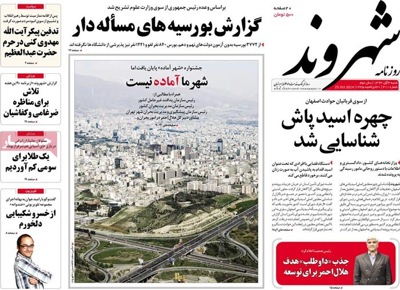 Sharq has quoted Mohammad-Taghi Mesbah-Yazdi, a member of the Assembly of Experts, as telling those who seek to prevent vice, “It’s imperative to avoid acts that stoke tensions.”

Sharq: “In a chat with the daily, those active on the political front threw their weight behind strategies devised by former President Mohammad Khatami.” 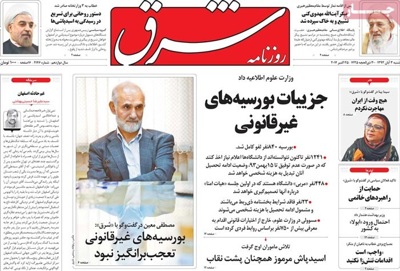 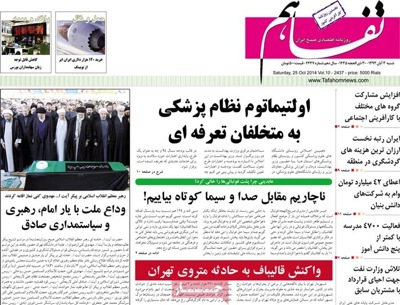 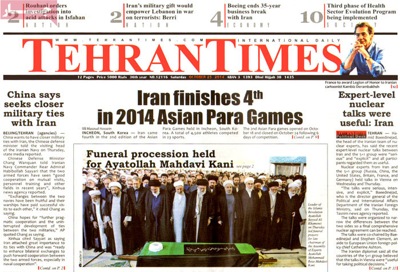