They also highlighted the first court hearing of those who attacked the Saudi embassy in Tehran.

The post-coup developments in Turkey including the Turkish President Recep Tayyip Erdogan’s purge of his opponents were also a top story today.

1- Mr President! People Should Talk!  [In reaction to people’s complaints about economic conditions, Rouhani had told them ‘you don’t listen to me!’]

3- Was Turkey Coup a Fake One? 1- Names of Those Who Attacked Saudi Embassy Should Be Disclosed: MP 2- Grounds Are Prepared for Iran’s Accession to WTO: Minister 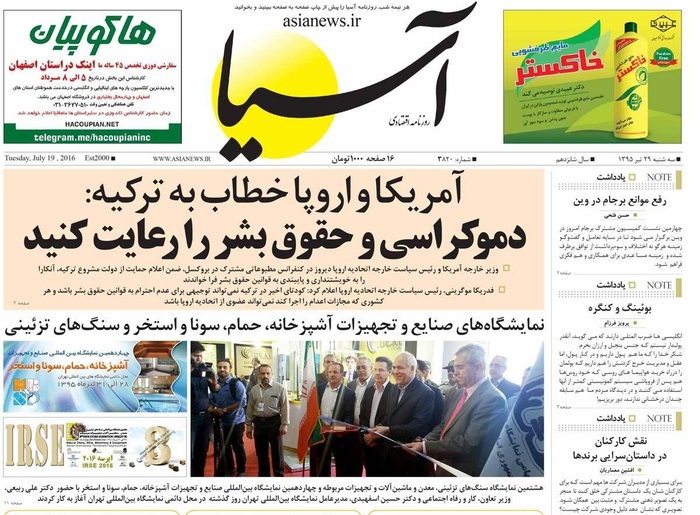 2- True Islam Has Nothing to Do with Terrorism: Judiciary Chief 1- 1.5m Iranian Men Have Refused to Do Their Military Service

2- Increase in Tendency of Iranians towards Alcoholic Drinks 1- Those Who Attacked Saudi Embassy: We Regret What We Did 1- Use of the Word “Islamic Terrorism” Aimed at Promoting Islamophobia: Judiciary Chief 1- Tsunami of Arrests in Turkey

3- The Old Wound of Racism, the Historical Pain of the US 1- 2 Executives, Who Had Received Astronomical Salaries, Became Presidents of 2 Banks!

2- No One in Judiciary Receives Huge Salaries: Chief

3- EU: Erdogan Had Prepared List of Opponents in Advance

5- IRGC to Build Houses for 20,000 Deprived Iranians This Year

6- Leader of Kashmir’s Muslims Calls for Islamic Countries’ Help: 45 Killed and 3,100 Wounded in Past 10 Days 2- US Main Suspect of Turkey Coup: What Are Coup Plotters Doing in the US? 1- Pokémon Go in Streets of Tehran

2- We’ve Signed a Nuclear Deal, Not a Submission Deal: Zarif, Criticizing US Performance

3- Cause of Kiarostami’s Death to Be Announced Tomorrow, 15 Days after His Demise 1- Iran Has Stood and Will Stand by Nation and Legitimate Government of Turkey: Rouhani

3- JCPOA Is Not a Great Victory, But Is Totally Defensible: Zarif 3- Kashmir’s Eye and Cry of Foua and Kefraya [Editorial]

4- Strange Increase in Number of Applicants and Price of Visiting Turkey: Selfie with Tanks and Turkish Dialect