Newspapers on Wednesday highlighted the recent remarks by Iranian Minister of Culture and Islamic Guidance Ali Jannati, who underlined the need for a revision in the law on prohibition of using satellite equipment.

They also covered a letter sent by 75 US figures to President Barack Obama, asking him to strengthen Washington’s ties with Tehran.

Another top story was the dismissal of 13 more executives who had received astronomical salaries. The issue has been a main part of Iranian front pages for the past weeks.

The first anniversary of the nuclear deal between Tehran and world powers was also covered in special issues in several newspapers. Many articles for and against the deal were published today.

2- US Barriers Have Decreased Iran’s Hope on JCPOA: AFP

1- Economic Downturn to Be Exacerbated Given Government’s Debts: CBI Governor

4- Mitsubishi in Talks with Iran for Plane Sale 1- Reforming the Law of Satellite Equipment in Parliament

3- Another Accident for Soldiers: This Time in Nowshahr [north of Iran]; Army Ground Force Commander: From Now on, Soldiers Will Be Transferred with Train

4- Rouhani Should Even Apologize for France’s Defeat in Euro 2016! [Editorial] 2- Executives Are Falling Victim to a Systematic Corruption: Expert

6- 75 US Figures Call for Improvement of Ties with Iran 1- So Far, We Have Signed 215 Deals with Foreign Banks: Minister

2- We Sold 32 Tons of Heavy Water to US, and We Received the Money: Deputy FM 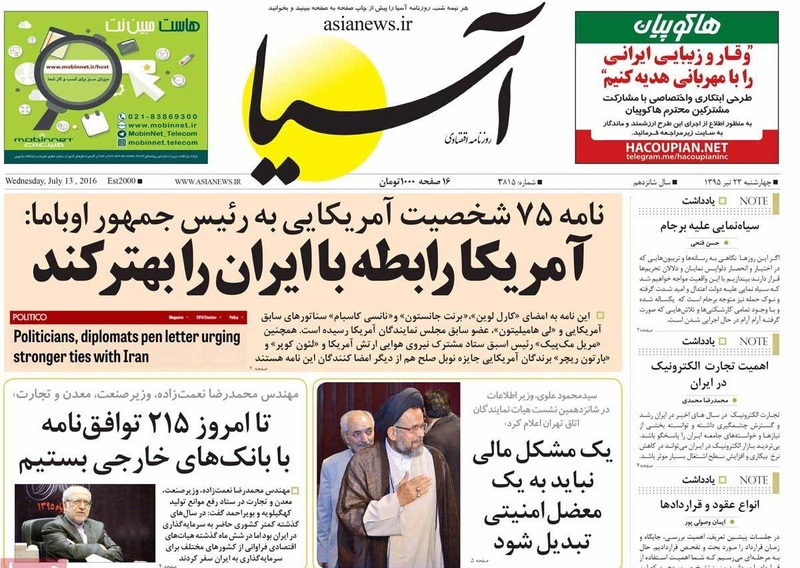 2- World’s Power in Women’s Hands: Will Democracy Smile at Women? 1- 70% of People Are Acting against Law of Ban on Satellite Equipment: Minister; Satellite Law Should Be Revised

2- Changes Begin in Rouhani’s Cabinet: Parliamentary and Legal VPs Will Be Replaced 1- Doosti [Friendship] Satellite to Be Launched This Year

3- Racism Exists across the US: Biden 1- Is [Culture Minister] Jannati Going to Remove the Ban on Use of Satellite? [Like what Ali Larijani, the then culture minister, did 24 years ago by allowing people to use VHS players] 1- We Apologize: Government Spokesman in Reaction to Delay in Release of State Contracts 4- Special Schools to Be Established for Married Students 1- Fever of University Entrance Exam in 369 Cities: 1,014,000 Applicants to Compete on Thursday and Friday

2- Iraqis Say No to ISIS and the US 1- Araqchi: Not All Sanctions Were Supposed to Be Removed from the First Place! 1- More than 100 Foreign Investments Made after JCPOA: Trade Minister

2- US Leadership in the World Is Coming to an End: Brzezinski

4- Turki al-Faisal, Like Saddam, Has Tied Its Future to Terrorists: FM

5- Getting away from Iran Will Endanger US Interests: 75 Figures to Obama 3- Black People in Germany, Britain, and Canada Express Solidarity with US Protesters 3- Turkey: We’re Looking for Improvement of Ties with Syria and Iraq 1- President: People Are Paying the Price for US Mistakes

2- US Senate and House Jointly Attack JCPOA: 3 Anti-Iran Motions to Be Put to Vote in US House 1- Those Who Attacked Iranian MP in Western Iran Were Foreigners

2- Growing Increase in Number of Critics of Medical Community 1- We Warned the Government against Huge Salaries, They Didn’t Pay Attention: Official

2- US Congress to Impose 3 New Sanctions against Iran