Newspapers on Sunday widely covered the death of renowned Iranian filmmaker Abbas Kiarostami and the possible medical errors that led to his demise. Kiarostami is laid to rest today while the medical error issue is being seriously pursued by the Health Ministry.

The remarks by Atomic Energy Organization of Iran [AEOI] Chief Ali Akbar Salehi about a plot being hatched by the West against Iran’s nuclear program also received huge coverage. He had earlier talked about the US violation of its JCPOA commitments, but his remarks were criticized by President Hassan Rouhani, who said Salehi is neither the foreign ministry nor the Central Bank chief to raise such claims. This time, Salehi said he has been a university professor for 40 years, and even if some ‘dear guys’ may get angry over his remarks, he should talk about the plot being hatched against Iran and the US violation of its commitments as per the nuclear deal.

Newspapers also focused on the ongoing unrest in the US and the protest rallies held by the Black people there, and mostly used the headline ‘civil war’ to refer to the developments.

These issues, as well as several more, are covered in following headlines.

1- President Should Start Confronting Huge Salaries from His Own Companions

4- We’ll Put on Vote Imposition of Fresh Sanctions against Iran: US Congressman 2- CBI Chief to Brief Parliament on Deal with FATF

3- Talks between Iranian Car-Makers with Italian, Korean, and German Counterparts 2- Fugitive Iranian Banker Khavari Has Bought at Least $12.1m of Properties in Canada 1- Today Is the Day for Coming! 2 Ex-Ministers of Interior Ready to Help Rouhani in Fight against Astronomical Salaries 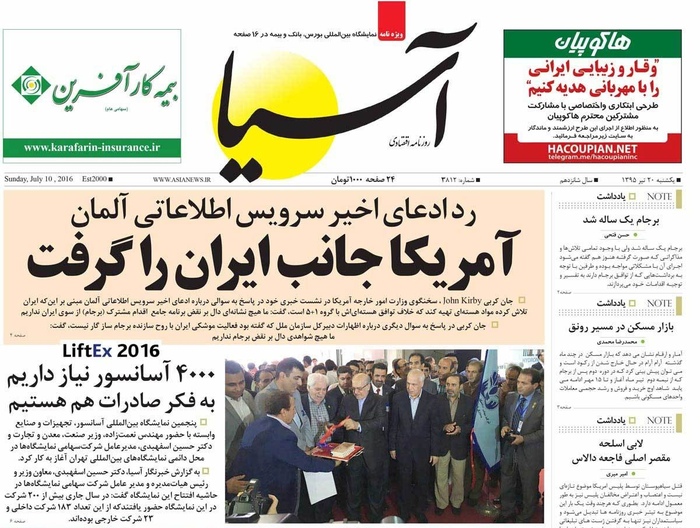 3- Farmers on Verge of Bankruptcy Because of Extreme Heat 1- Thousands of Bahrainis Call for Overthrow of Al Khalifa Regime

2- Unconventional Salaries Have Their Roots in the Past: VP

3- Islam and Christianity Should Cooperate to Help Establish the Rule of Religion: Imam Khomeini’s Grandson 1- Daughter of Which Assad? Is the Girl Who Claimed Title in Tehran Horse-Riding Race the Daughter of Bashar al-Assad?

2- All Obstacles to Development of Business in Iran

3- German Conspiracy for Nuclear Case: Salehi Warns against Complicity of Merkel and Ban

4- Troubles of a Wedding Ceremony: Mayor of Tehran Dismisses Reports about His Daughter’s Fancy Wedding in a Park in Tehran 2- Salehi Harshly Criticizes US Violation of Its Promises 1- Iran Has Not Violated JCPOA: US in Reaction to Claims Made by Germany and UN

4- Welfare Minister of Ahmadinejad: He Himself Was the Root Cause of 2009 Sedition [protests after presidential elections] 1- Nonstop from Persian Gulf to Gulf of Finland: Ambassador Talks about a Plan for Tehran-Helsinki Railway 2- North Korea’s Ballistic Reaction to US 3- New Scandal for Those Who Receive Illegitimate Salaries: Forgery of an Astronomical Paycheque for Kayhan’s Chief Shariatmadari 1- US Shocked by Police Racial Discrimination 1- We Should Be on Alert, a New Plot Is Looming: Salehi 1- Ahmadinejad Preparing the Grounds for His Return

3- All the Fuss about Presence of a Girl in Tehran, Which Was a Lie [on participation of Syrian President’s daughter in Tehran horse-riding competition]

4- US Civil War under Shadow of a Director’s Death [The Editorial criticizes the IRIB for its wide coverage of Kiarostami’s death and funeral, and little coverage of protest rallies in the US]

1- Oil Ministry’s Wonderful Prudence (!) in Containing Mahshahr Wildfire: Fire Was Extinguished When the Complex Ran out of Fuel!