A look at Iranian newspaper front pages on Jan. 24

A message by the Supreme Leader to the youth in Europe and North America dominated the front pages of Iranian newspapers on Saturday. Elimination of the Iranian national team from the AFC Asian Cup 2015 appeared on the cover of the dailies. And the passing of Saudi King Abdullah and the messages of condolence released by Iranian officials, including President Rouhani, made front-page headlines too.

Abrar: There are as many as 500 women in Tehran who sleep rough.

Abrar: Iran’s Foreign Ministry has offered condolences to the Saudi government and nation on the passing of King Abdullah and announced that Foreign Minister Mohammad Javad Zarif will attend a memorial service for the late king. 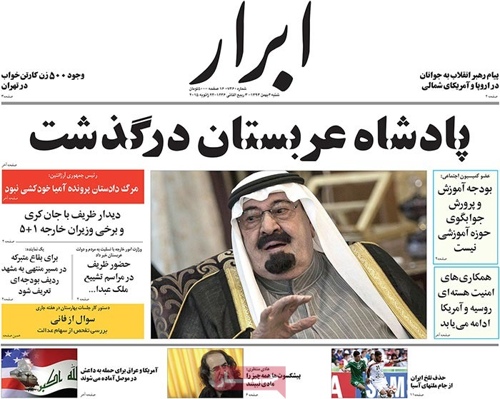 Afkar: The EU Troika has warned the US Congress not to impose fresh sanctions against Iran. 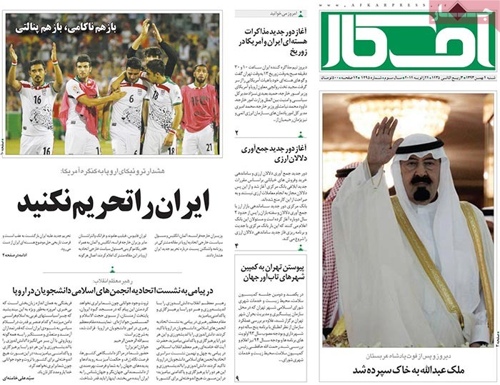 Aftab-e Yazd: Chairman of the Expediency Council Akbar Hashemi Rafsanjani has conveyed his condolences on the passing of the Saudi king. 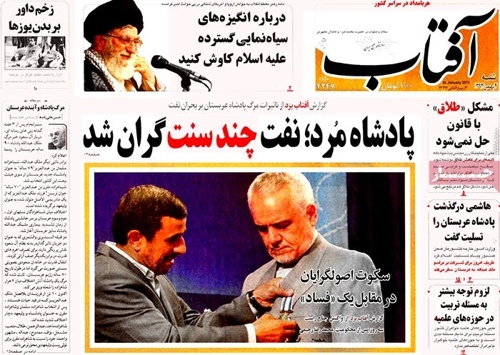 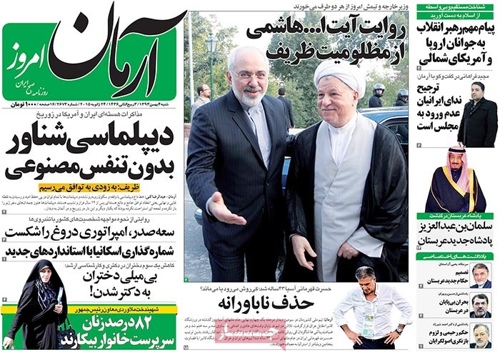 Asrar: The head of the Supreme Audit Court has pleaded for cash subsidies to high-income individuals to stop.

Asrar: “From the perspective of hardliners, the criterion for diplomacy is to have a contemptuous look at the other side in negotiations,” said Sadegh Zibakalam, a political analyst.

Asrar: A new round of nuclear talks between Iran and America has got underway in Zurich. 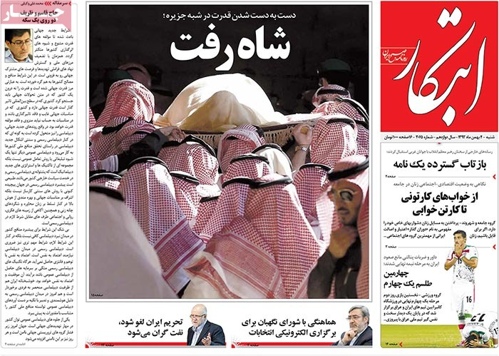 Emtiaz: “We won’t scuttle the construction of petroleum refineries,” said the oil minister. Etemad: A heroic defeat: A horrible call by the referee coupled with back luck in penalty shoot-outs brought the most stellar performance of late by Iran’s soccer team to a dramatic end.

Etemad: An opinion poll conducted by the daily indicates that the Iranian people want Carlos Queiroz to stay at the helm of Iran’s national soccer squad. 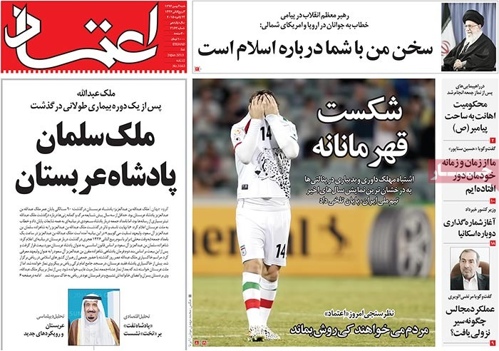 Ettela’at: The European Union has lifted its sanctions against the Islamic Republic of Iran Shipping Lines and Tejarat Bank.

Ettela’at: In a message the Supreme Leader advised the youth in Europe and North America not to allow their statesmen to identify terrorists as representatives of Islam. 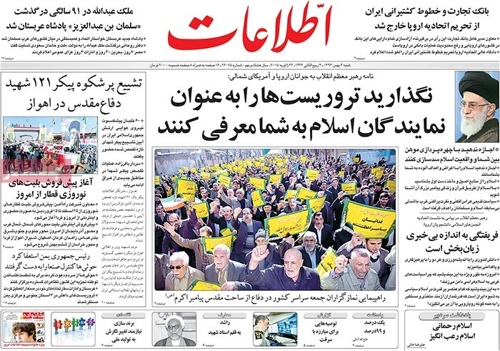 Hambastegi: The interior minister has said his ministry is working with the Guardian Council to organize electronic elections. 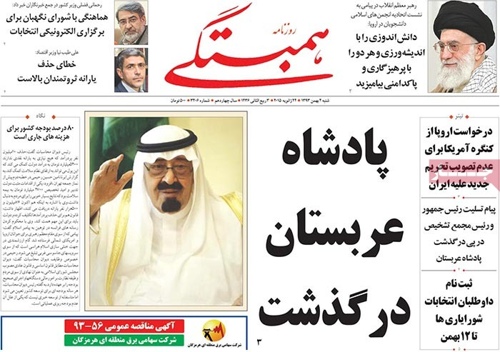 Hemayat: The passing of the Saudi King has seen oil prices go up. 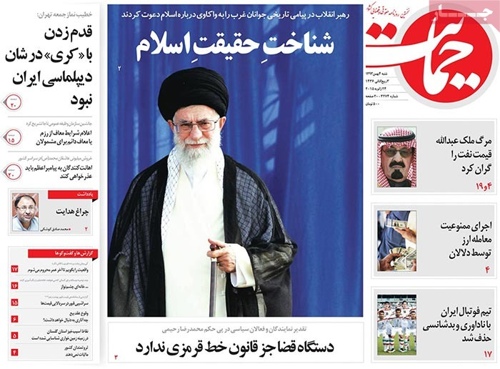 Iran: President Rouhani has extended his condolences on the demise of King Abdullah.

Iran: The verdict which sentenced Mohammad Reza Rahimi, the first Vice-President under Ahmadinejad, to jail and fines has been partially upheld. 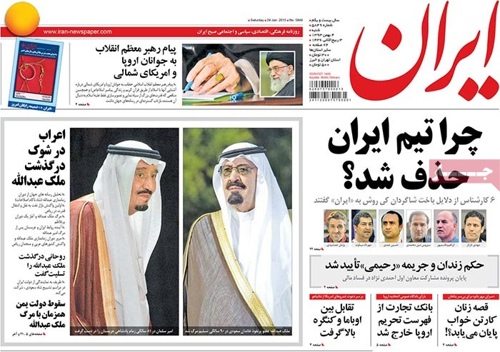 Jomhouri Islami: “Buying and selling foreign currencies is against the law,” said the deputy governor of the Central Bank of Iran. 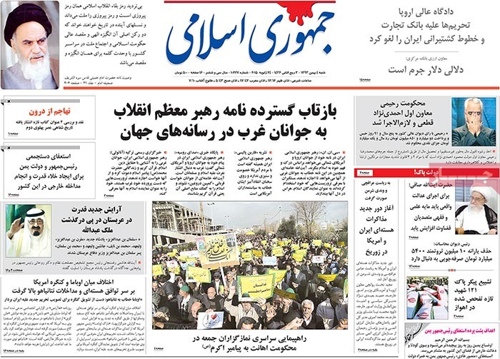 Kar va Kargar: A funeral procession has been held in the southern city of Ahvaz for 121 unknown fallen soldiers of the Sacred Defense [Iran-Iraq war]. 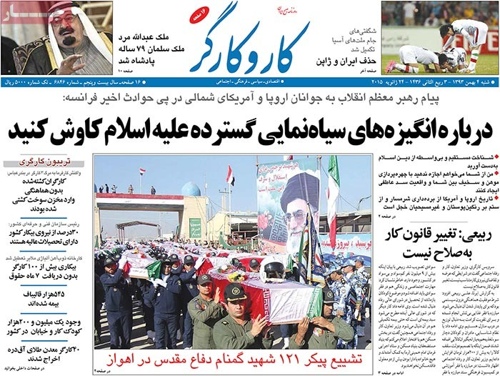 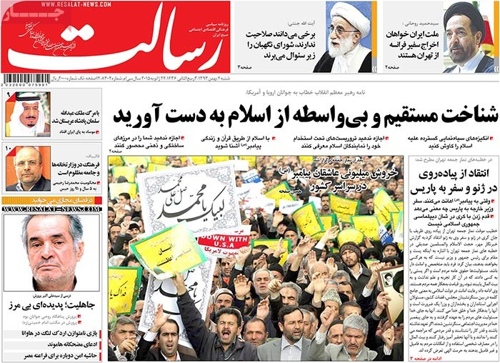