A look at Iranian newspaper front pages on Dec. 17

The massacre of schoolchildren at the hands of the Pakistani Taliban was the dominant front-page story in Iranian newspapers on Wednesday. “A bloody day in Peshawar,” one headline read. “Ruthless massacre of children,” said another. Also on the front pages of the dailies were the comments of the commander of the Islamic Revolution Guard Corps on relations between the corps and the government of President Rouhani. Major General Mohammad Ali Jafari was quoted as saying that the president was not alluding to his men when he told an anti-corruption conference in Tehran last week if what they have at their disposal is given to anyone, they would become corrupt. Dailies also ran front-page reports on the Iranian-born Haron Monis who took hostages at a café in Sydney, Australia and was killed in a shootout with police after a 16-hour-long drama.

Abrar: “We are still away from reaching a settlement [in nuclear talks],” said Iranian negotiator Seyyed Abbas Araghchi.

Abrar: The chairman of the Expediency Council has said that if religious extremism is not harnessed, another IS will be created. 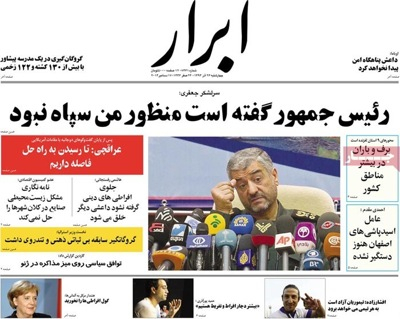 Afarinesh: “The government cannot report to the public the depth of the problems it has inherited [from its predecessor],” said Chairman of the Expediency Council Ayatollah Akbar Hashemi Rafsanjani. 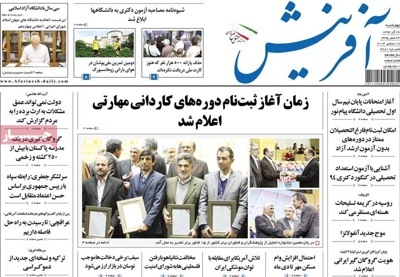 Afkar: The Stock Exchange has finally landed in positive territory. 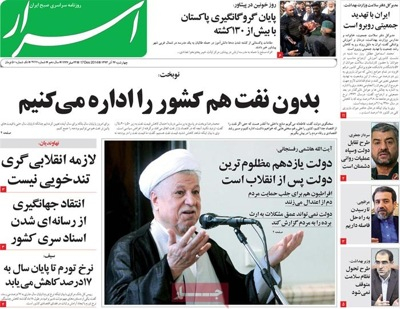 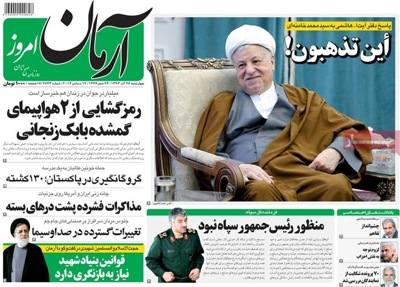 Asr-e Rasaneh: A ship full of foreign tourists is on its way to Iran. 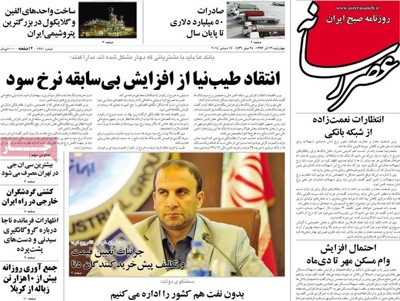 Asrar: “We can run the country even without oil [revenues],” said Government Spokesman Mohammad Baqer Nobakht.

Ebtekar: Up to 130 people were killed in a Taliban attack on a school in Peshawar, Pakistan. 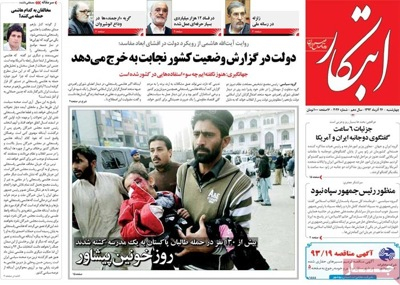 Etemad: First Vice-President Eshaq Jahangiri has slammed the release by the media of the confidential [government] decisions. 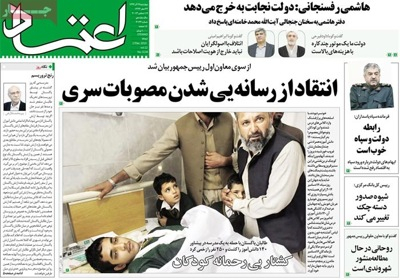 Ettela’at: Iran’s top researchers and technologists have been rewarded in a ceremony [in Tehran].

Ettela’at: The European Union has said that it will cooperate with Iran and Russia to defuse the Syrian crisis. 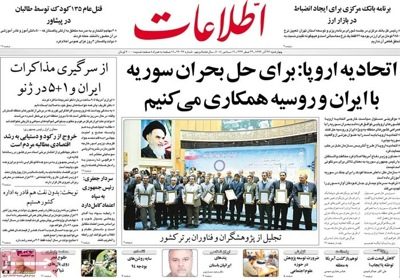 Hemayat: “Reports on tortures in America are a reflection of the breakdown in morality,” said Judiciary Chief Sadegh Amoli Larijani 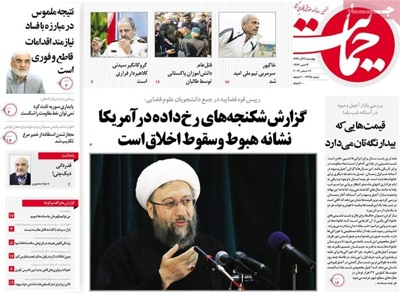 Javan: “Three economists in parliament have warned President Rouhani that the fluctuations of foreign currency and gold markets as well as a volatile stock exchange could retrigger recession and inflation.” 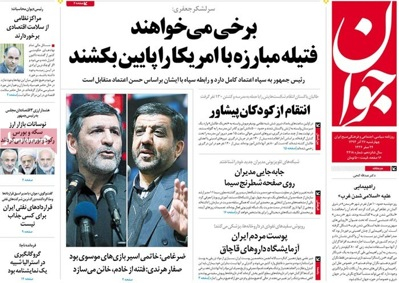 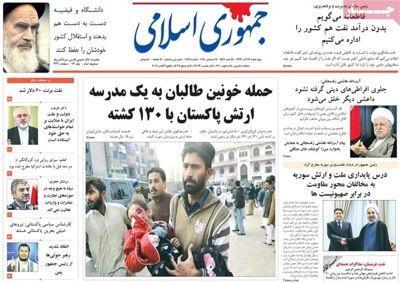 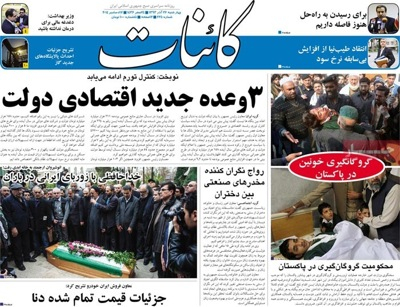 Kayhan: “Some are trying to weaken Iranian opposition to the United States,” said the commander of the Islamic Revolution Guard Corps. 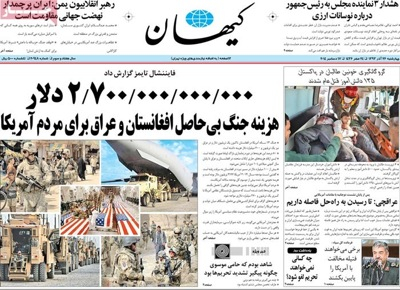 Mardomsalari: “The law on free access to information could be revolutionizing,” said Deputy Minister of Culture and Islamic Guidance Hossein Entezami.

Mardomsalari: “The agency that makes decisions on the house arrest [of those who disputed the results of the 2009 presidential elections and thus caused chaos] is the Supreme National Security Council,” said Justice Minister Mostafa Pourmohammadi. 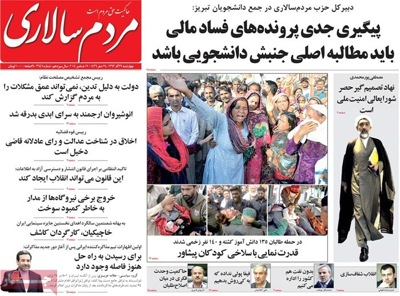 Qods: Parliament has taken the first step toward turning up the heat on corruption. It has drafted a bill that would oversee the creation of an organization to lead the fight against corruption. The organization will answer to the Supreme Leader. 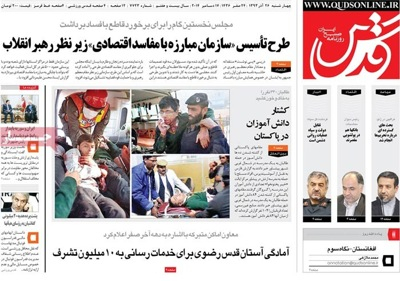 Shahrvand: “Managers who were successful in the radio and TV organization have made a comeback to the national broadcaster.” 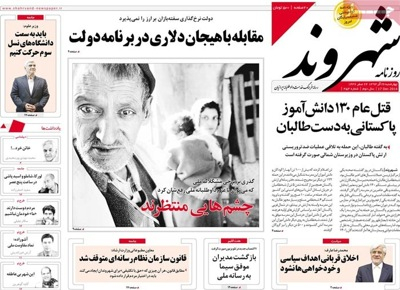 Sharq: “It is impossible to streamline the housing sector over a short period of time,” said the minister of roads and urban development. 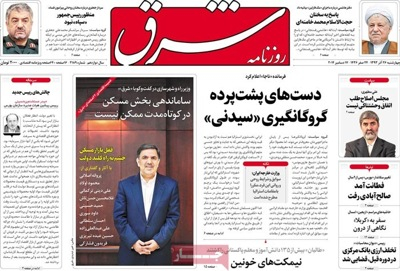 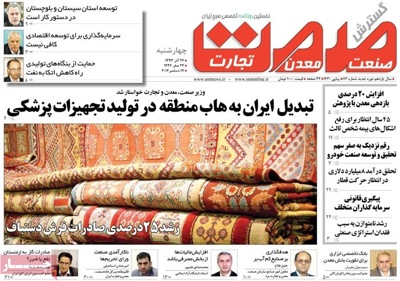