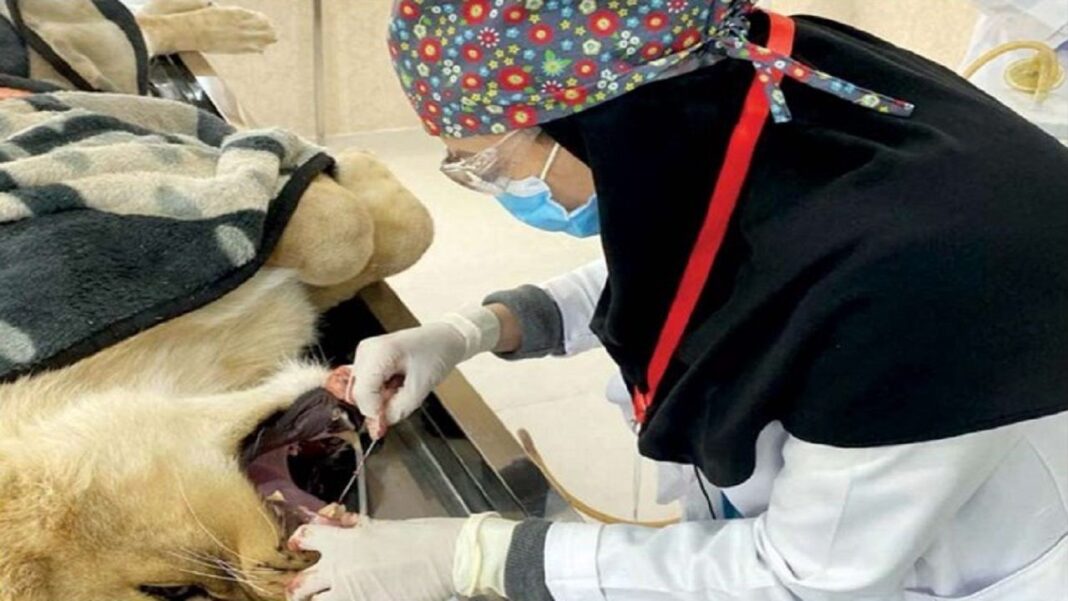 This is the story of a female veterinarian undertaking the daunting task of performing a root canal surgery on a lioness.

It all began when “Maya”, a lioness kept at the zoo in the city of Qazvin in northcentral Iran, broke a canine tooth, which is one of the most important tools for hunting and eating in lions!

Maya was fortunate enough to have veterinary dentist Azin Tavakoli by its bed. It was the first time in Iran that a lioness was undergoing root canal treatment.

What follows is the story of experiencing putting one’s hand inside a lioness’s mouth as recounted by Dr. Tavakoli herself in an interview with the Jam-e-Jam newspaper. 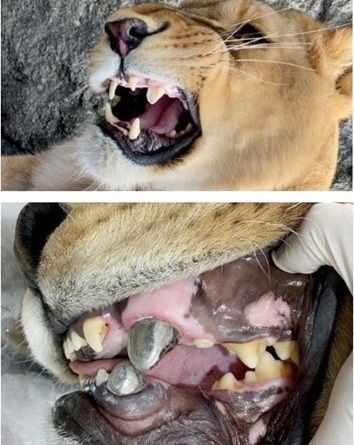 2-year-old Maya, a lioness at Qazvin’s zoo known as the Nature Village, had broken the crown of her upper left canine.

Canine teeth are one of the significant tools for survival among predators, and surveys indicate that dental injury, particularly dental fractures, can reduce the lifespan of these animals by up to 20%.

Even other animals will be a threat to these predators’ survival once they realize that their rivals have become vulnerable.

Such injuries cannot be easily identified in the wild, especially among animals living in their natural habitats, says Dr. Tavakoli.

However, because Maya lived at a zoo, she had the chance to show her pain.

Getting Ready to Operate on ‘King of the Jungle’

“Given the big stature of the lioness, certain facilities and arrangements were required in hospital, and the problems associated with transferring such animals without putting them under stress amounted to a problematic and complex process,” says the veterinarian.

“Given the condition of Maya, we decided to provide the tools and equipment needed to fix the broken tooth at the place where Maya was being kept, which would eliminate the need to take her to hospital,” Dr. Tavakoli adds.

“My expertise is to treat and operate on the teeth of small animals such as dogs and cats. Of course, I have had the experience of operating on the tooth of a wolf at Pardisan park before. But the point is, the teeth of lions are much larger,” she explains.

“The most important challenge for me in this surgery was that I didn’t have the right equipment suitable for the size of the lioness’s teeth,” she adds.

Of course, it was not only the treatment of this single canine tooth! When Dr. Tavakoli’s team was preparing the necessary equipment for the treatment of Maya’s broken tooth, the lioness had another accident when she broke her lower left canine tooth as well. Now both teeth needed treatment.

“As the crown of Maya’s tooth was broken, and the nerve ends in her both upper canines as well as in her lower left canine tooth had surfaced, she needed to undergo root canal surgery as well as the treatment of the broken crown,” she explains.

“This model of treatment to save the teeth of predator animals is a common method in the world and there are numerous reports on it in scientific articles in the domain of veterinary medicine,” she says.

Dr. Tavakoli says no such operation had been performed in Iran before Maya’s surgery, and that is why the necessary equipment for the operation was not available in the country.

“I needed to procure the equipment from well-known producers of medical equipment for animals outside the country, but due to problems caused by sanctions as well as travel restrictions caused by the coronavirus pandemic, the work was delayed for a few months,” she says.

When Maya underwent her first dental surgery in December, 2020, she was 2.5 years old and her teeth had not fully grown yet. Therefore, a special technique had to be used to treat her damaged teeth, so that her growing teeth wouldn’t be harmed.

After getting X-ray photographs of her damaged teeth and carefully reviewing their condition, root canal operations were conducted in two two-hour sessions.

Then the restored teeth were molded to make metal crowns for them as metal is more resistant.

Now almost two months have passed since the surgery, and Maya is back to her normal life. According to zoo officials, she can now easily eat food and shows no symptoms of pain.