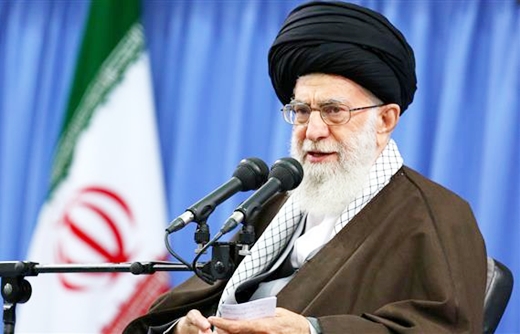 Leader of the Islamic Revolution Ayatollah Seyyed Ali Khamenei says the US has resorted to “deception” to obstruct international trade with Iran despite a nuclear agreement.

“On paper, the Americans say banks can trade with Iran but in practice they act in such an Iranophobic way that no trade can take place with Iran,” the Leader told a group of Iranian workers in Tehran Wednesday.

US and European businesses are reluctant to do business with Iran over the fear of being penalized by Washington despite the nuclear agreement which requires countries to lift sanctions on Tehran.

Iranian officials have hit out at the US and the EU for failing to honor the nuclear agreement by keeping Iran locked out of the international financial system.

“An American official has said the bulk of sanctions has been maintained so that the investors are scared away and do not come here,” Ayatollah Khamenei said.

“The Americans are engaged in obstruction and deception. Then, they claim that we are pessimistic,” the Leader added.

Officials in the US State Department and Treasury have frequently said that Iran would not be given any access to the American financial system.

US Secretary of State John Kerry acknowledged earlier this month that Iran deserved access to the system because it had met its obligations under the nuclear agreement.