Iran’s Security Intertwined with That of Afghanistan: Shamkhani 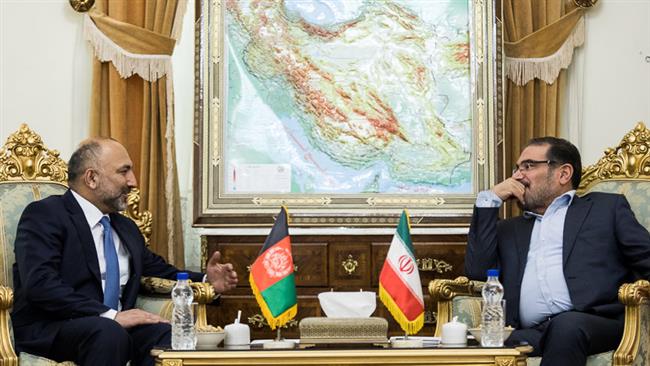 A senior Iranian official says the security of the Islamic Republic is "intertwined with and inseparable from" that of Afghanistan, stressing the need for more bilateral consultations and exchange of experience to fight the causes of insecurity.

He expressed concern over the continuation of financial, arms and intelligence assistance provided by some reactionary countries in the region to Takfiri and terrorist groups under the guise of establishing religious schools and social institutions.

Shamkhani added that such moves by the reactionary states would increase insecurity as well as religious and sectarian rifts and undermine the Afghan government’s efforts for the country’s development.

The SNSC secretary emphasized that further consultations between Tehran and Kabul would boost stability and peace along the border between the two countries and prepare the ground for the two sides to benefit from lasting and common interests.

Atmar, for his part, said Iran had played a constructive role in the establishment of the national unity government in Afghanistan, adding that Tehran and Kabul must hold more negotiations on ways to strengthen the Afghan government.

He added that the escalation of insecurity and political discord in Afghanistan would spread terrorism and insecurity into other countries in the region.

Afghanistan has been gripped by violence and insecurity since the United States and its allies invaded the country as part of Washington’s so-called war on terror in 2001. Many parts of the country remain plagued by militancy despite the presence of foreign troops.

During the past 16 years, the Taliban militants have been conducting terrorist attacks across the country, killing and displacing civilians.

In addition, the Daesh Takfiri terrorist group, which is mainly active in Syria and Iraq, has recently managed to take recruits from Afghan Taliban defectors.