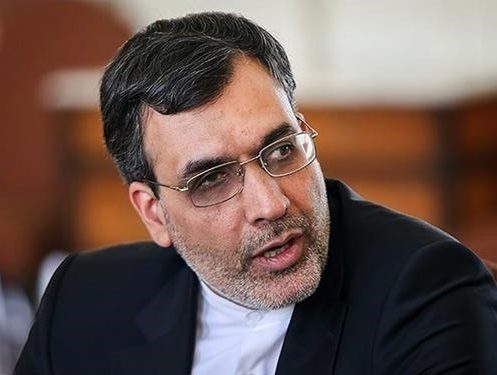 A top Iranian diplomat says the ‘limited’ presence of Iranian advisors in Syria comes at the request of Damascus and is not subject to agreement by any regional or international party.

Iran’s Deputy Foreign Minister for Arab and African Affairs Hossein Jaberi Ansari has weighed in on the latest developments in Syria as well as Iran’s role in the Arab country.

Speaking to reporters after his meeting with Russian President Vladimir Putin’s Special Envoy for Syria Alexander Lavrentiev, Jaberi Ansari said the presence of Iranian forces in Syria comes at the request of the Syrian government and is based on an agreement by Tehran and Damascus.

“The presence of Iranian forces in Syria, in any form and at any level, is at the request of the Syrian government and agreement by Tehran and Damascus, and is not subject to any agreement by any regional or international party,” said the diplomat in response to a question about certain reports which suggest Russia has, at the request of Israel, accepted that Iranian troops must not be present in southern Syria.

According to a Farsi report by ISNA, he said even if others reach agreement on Iran, it will practically have no bearing on the presence of Iranian troops in Syria.

Jaberi Ansari then touched upon Iran’s strategy on the Syria crisis and the necessity of resolving it politically.

“Iran has not been, and is not interested to get involved in the crisis on a large scale,” he said.

Jaberi Ansari said Iran’s presence in the Arab country is “limited, calculated” and at the request of Damascus as well as mutual agreement by both sides.

“We would like to see stability and tranquility return to Syria. We want to see the crisis in Syria end as soon as possible. We are not seeking to expand our sphere of intervention in Syria. As I said, what is important for Iran is an immediate end to the crisis, the human catastrophe in Syria and the incessant destruction of the country,” he noted.

When it comes to the settlement of the Syria crisis, he said, what is important is that Syrian people themselves should determine their own fate, highlighting that Iran’s intervention in Syria and contribution to efforts to settle the crisis are aimed at securing Syrians’ right to self-determination.

He then turned to talks in the Kazakh capital, Astana, aimed at promoting peace in Syria.

Jaberi Ansari said the negotiations are brokered by Iran, Turkey and Russia, which are the guarantors of the agreements reached during the talks.

However, he added, delegations from other countries, such as France, are also present on the sidelines of the talks, but they do not take part in the main sessions.

He said these delegations hold diplomatic consultations with one another, but do not have any direct impact on the trend of the talks.

“The three countries of Iran, Russia and Turkey as well as the Syrian government and the opposition have the main and direct role in the talks,” he said.

“Some parties and countries such as the UN envoy attend the meetings as observers. They take part in official and open sessions,” he noted.

He then touched upon his two-hour meeting with the Russian delegation in Tehran on Syria.

He said the rapid pace of developments in Syria makes it all the more necessary for Iran, Russia and other key players to hold consultations and talks at short intervals.

Therefore, he added, Iran and Russia are currently holding meetings at one-week or two-week intervals.

Turkey Not Ready for Final Deal on Syria

He further said agreement on the four de-escalation zones in Syria already discussed in Astana 5 talks has not been reached yet due to differences on the areas in the north of Syria as well as Turkey’s lack of readiness in the talks to strike a final deal.

He said new developments have happened in Syria since Astana 5 talks.

“In this regard, Iranian and Russian officials held talks on the Syria Crisis. Mr. Lavrentiev and his accompanying delegation held meetings with Mr. Shamkhani and me. We discussed the generalities and details of issues and remaining solutions to the Syria crisis.”

He said the key objective of the Astana talks is to return tranquility and stability to Syria while highlighting the importance of fighting terrorism in the Arab country.

Jaberi Ansari then referred to the importance of easing tension and military conflicts in Syria.

He noted the trend of de-escalation should be planned in such a way that the Syrian people suffer the least possible losses and human catastrophes are stopped.

He noted that no development must result in the disintegration of Syria and the violation of the country’s territorial integrity and sovereignty.

“This is our red line,” he stressed.

The diplomat then said Astana talks have played a key role in drawing a line between the Syrian opposition and terrorist groups.

He underscored Astana talks have played a positive role in helping open up a new political horizon to resolve the Syria crisis.

“Of course, this does not mean there are no problems in front of us. The Syria crisis is a multi-layered and complex one. Different players with different interests […] are involved in the crisis.”

Expert Meeting on Syria to Be Held in Tehran

He said an expert meeting will be held in Tehran in two weeks’ time.

The diplomat then touched upon a recent meeting between the US and Russia on Syria on the sidelines of the G20 meeting in Hamburg.

“Any agreement on Syria should be within the basic red lines in settling the Syria crisis.”

He touched upon the significance of maintaining Syria’s territorial integrity and sovereignty, and said any arrangement regarding a ceasefire in the country would be temporary.

“The final decision-makers in settling the crisis are Syrian people, and any agreement should be in line with the Syrian nation’s opinions as well as the basic principles. This way, the agreement can play a positive role in developments in Syria.”

Jaberi Ansari then said any agreement out of the framework of Astana talks may have short-term results, but will not be effective in the medium and long terms, and may even be counterproductive.

He also noted that the US government has so far kept flip-flopping on the Syria crisis and now it is time to see to what extent the Americans conform the agreement reached on Syria during Astana talks.