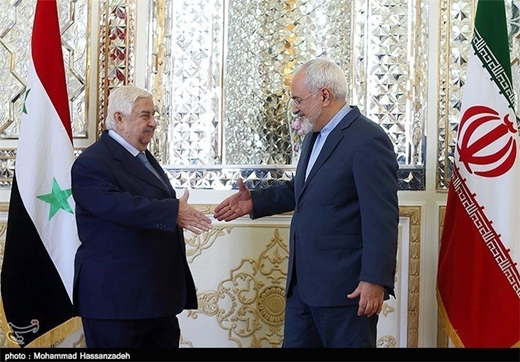 Foreign Minister Zarif has exchanged views with the Algerian and Syrian top diplomats on bilateral ties as well as the latest developments in the Middle East.

Iranian Foreign Minister Mohammad Javad Zarif discussed a broad range of issues with his counterparts from Algeria and Syria in New York.

At a meeting Thursday on the sidelines of the 70th annual session of the United Nations General Assembly in New York, Zarif and Algerian Foreign Minister Ramtane Lamamra held talks on bilateral ties, including cooperation in the energy market as part of efforts to stabilize oil prices.

They also talked about Tehran and Algiers’ support for each other in the international circles.

Efforts to end a drawn-out crisis in Syria and establish peace and stability in the Middle East and a tragic crush of Hajj pilgrims in Saudi Arabia’s Mina were among other subjects discussed at the meeting.

In a separate meeting, Zarif also met Syria’s top diplomat, Walid Muallem. They exchanged views on the latest developments in the Arab country with both emphasizing the need for continued fight against terrorism and extremism in the entire Middle East.