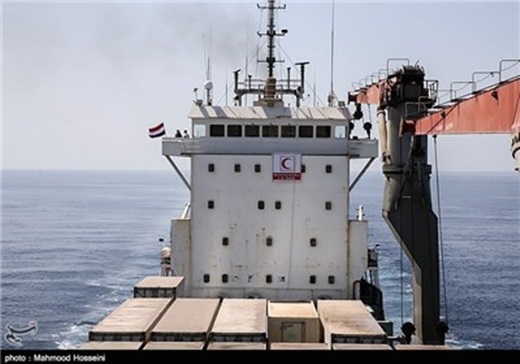 The Iranian cargo ship “Nejat” (Rescue) loaded with 2,500 tons of aid supplies for war-stricken Yemen will dock in Hodeida port on May 21, the ship’s captain announced.

“It is four days since we set sail from Bandar Abbas and God willing, given the weather forecast, we will enter (Yemen’s) Hodeida port six days later on May 21,” Captain Masoud Qazi Mir-Saeed told the Tasnim News Agency on Friday evening.

He said currently the ship is located 30 miles from Omani coasts and is sailing toward the Gulf of Aden.

The captain emphasized that the ship is moving toward Yemen, adding that everything for the voyage is good and there is no problem.

The ship’s journey comes after Yemen agreed to a five-day truce proposed by Saudi Arabia.

The ceasefire, which is to allow humanitarian aid in, came into effect at 11 pm (2000 GMT) on Tuesday.

Some seven weeks of deadly aerial attacks on Yemen have killed over 3,500 people and left some 6,200 others injured.