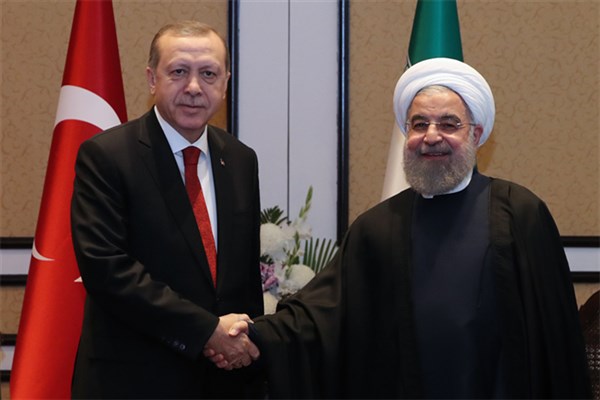 Iran's President Hassan Rouhani and his Turkish counterpart Recep Tayyip Erdogan have called for further enhancement of bilateral relations in a phone conversation.

During the Sunday talks, Rouhani said Iran is fully prepared for development of relations with Turkey as a friendly and brotherly country.

He also underlined the necessity for accelerated implementation of earlier agreements between the two states.

The Iranian president also offered congratulations to the Turkish nation and government and all Muslim people around the world on the Eid al-Adha.

Erdogan, in turn, said Ankara is ready for further promotion of its relations with Tehran in all spheres.

He also congratulated the Iranian president, government, and nation on the Eid al-Adha, and expressed hope that the day would awaken and unite the Muslim world and boost unity and brotherhood among Islamic states.

Iran and Turkey, as major trade partners, plan to increase their annual trade to 30 billion dollar in defiance of the US pressure, which is aimed at isolating Iran’s economy.

In the three-month period beginning in late March 2019, Turkey imported around $2.2 billion worth of goods and services from Iran, a five-fold jump compared to the similar quarterly period in 2018, according to data released by Tehran chamber of commerce on Monday.