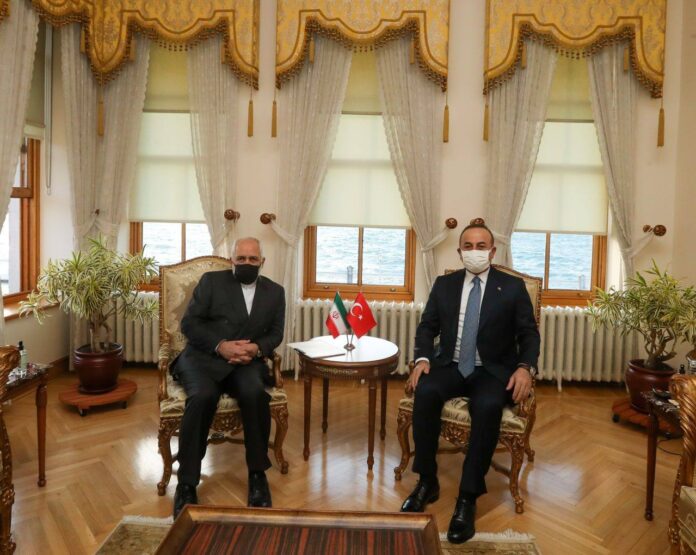 Iranian Foreign Minister Mohammad Javad Zarif, who is in Turkey on the fifth leg of his regional tour, held a meeting with his Turkish counterpart Mevlut Cavusoglu in Istanbul on Friday morning.

In this meeting, the two sides conferred on bilateral relations, regional developments, and international issues.

On bilateral issues, Zarif said relations between the two countries and their benefits are very important for the people of Iran and Turkey.

He also discussed Iran-Turkey cooperation in the fields of transit, business, energy and mutual efforts to resolve the problems of the companies and economic player of both countries.

On regional issues, Foreign Minister Zarif referred to the discussions he had during his visits to four regional capitals, and elaborated on the Islamic Republic’s view in the wake of cessation of clashes in Karabakh and the need for tapping into the existing opportunity for continued calm and stability in the region while developing collaborations especially in the economic fields.

Cavusoglu, in turn, highlighted the importance of relations between Tehran and Ankara, and underlined the significance of implementing the two countries’ earlier agreements in the fields of transport, business and energy.

He also referred to the eighth meeting of Iran-Turkey Joint Economic Commission, which is to be held in Tehran in the near future, and said the two countries will expand their collaborations in the time ahead.

The strategic bilateral meetings, the leaders’ summit of Astana Process, the trilateral meeting of Iran, Turkey and Azerbaijan Republic, the issues related to Syria and the recent meeting in Geneva on the country’s Constitution, the trilateral collaborations between Iran, Turkey and Afghanistan, and the two countries’ cooperation on Coronavirus and its vaccine were among other issues dicussed by the Iranian and Turkish foreign ministers in this meeting.